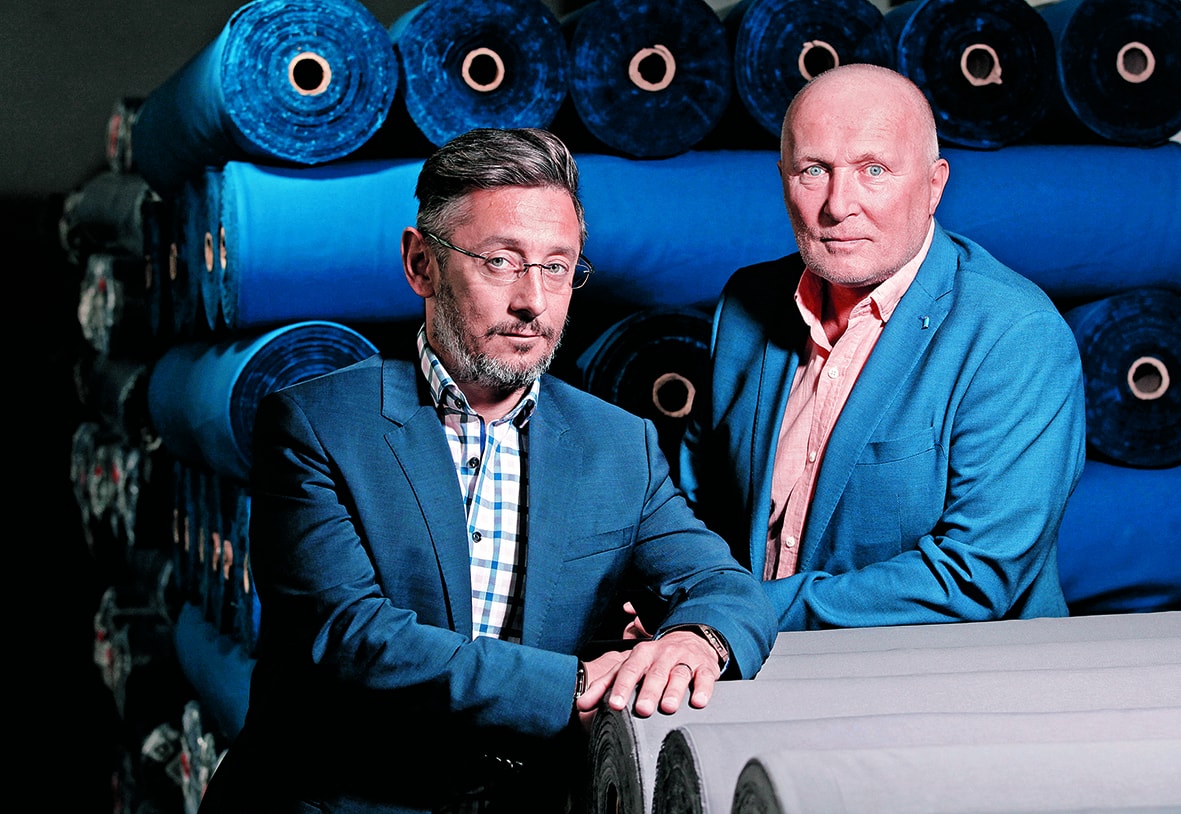 Textúra Zrt., a workwear material distributor, started out from a 22 m2 shop in Budapest. Persistent work and a good business acumen ensured quick success. Over the course of 30 years, they have become an important regional company with several subsidiaries abroad.

Textura has seen several crises over its history. Still, they have managed to stay ahead of the devastating competition from Asia and become a leading wholesaler of textile raw materials for protective gear and workwear. They now have over 1,500 customers, mostly sewing workshops, which grants them access to hundreds of thousands businesses all over Europe. They supply a wide range of industries, including hospitals, construction contractors, automotive suppliers and manufacturing plants with their products. Meanwhile they also outsmart the challenges of the future. Currently, their primary goal is to become eligible to go public and to conquer a new market segment. László Schneer, who started his career in the construction industry and is now a member of the Board of Directors and a dominant founder of Textúra Zrt., has always been interested in commerce. This company of 70 employees has four members on its board of directors: László Schneer, István Szilágyi, Tamás Salgó and Ferenc Wirtmann.

László Schneer is a strong-willed businessman. He demonstrated his courage when he changed profiles from one month to next, opening his first cut goods and smallware shop in Budapest in 1986.“Life was different back then. We always paid in cash, and goods were scarce. Every morning, I started out by going to one of the country’s textile wholesalers, and drove 90,000 km each year”, he reminisces. The start however was so good that they had become one of the biggest by 1990, with around HUF 100 million in turnover. When international trade was liberalised, they immediately decided to import goods—and established Textúra. Their hard work paid off, and the company’s turnover was already in the billions of forints by 1993. A combination of lot of hard work and a favourable market environment led to their success. Goods were scarce at the time, so it was relatively easy to sell theirs, and they soon added garments to their portfolio which had so far only been based on denim.

By the early 2000s, however, they realised that the Asian competition had won, and they had to let go of their conventional garment business unit. It was then that they switched to workwear materials. Chinese manufacturers could only produce large batches, but the European factories did not require orders of 3,000 to 4,000 items at a time, only a few hundred. Given that Asian manufacturers did not want to make smaller batches, they started to import these types of material. This special segment met and still meets an important market demand, and accordingly, it brought results.

Their established their first subsidiary abroad in Romania, in 2008. Besides boosting further development, this expansion was also an opportunity to learn how to manage a subsidiary located 1,000 km away. This was followed by the establishment of their Czech subsidiary in 2013, which also covers the Slovak and Polish markets. They also set up shop in Serbia in 2017, and have a share in a Croatian company as well. Currently, they are focusing on Italy, where they work together with an exclusive partner. But they also sell to all Western European countries. They are market leaders in Hungary and Romania and major players in the other Visegrád countries. Their strong regional presence has taught them a lot about entering new markets. The main lesson they have learnt is that they usually do not contact well-established partners who are already under contract with a competitor, but smaller resellers with considerable nonpayment risk. It was István Szilágyi, another board member, who told us this. They started to take out credit insurance polices for their partners a few years ago, and they only sell to those whom they can work this out with. This makes market penetration and becoming known in new countries much more difficult; hence, they still need to take some risk. In other words, the market has to be ripe. 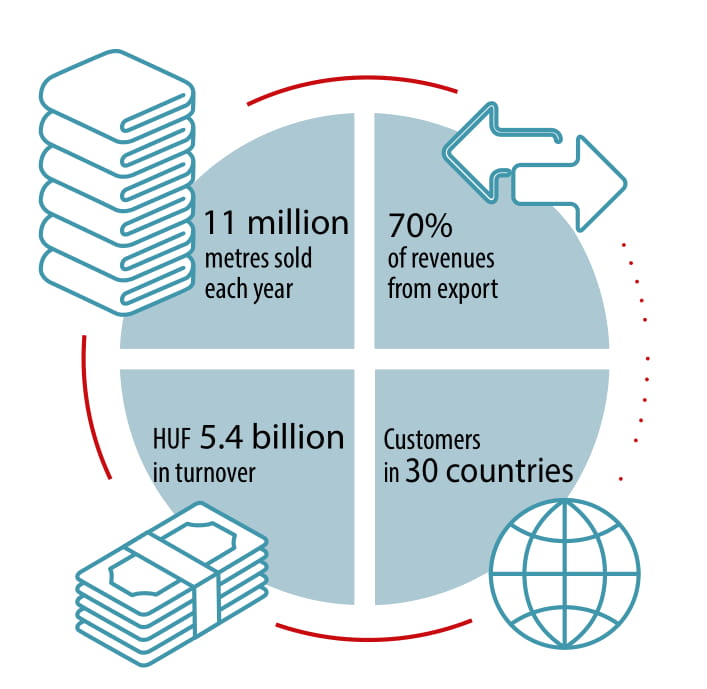 Although the 2008 financial crisis hit them, it did not destroy them. Despite suffering a fall in turnover, down to HUF 1.4 billion, they could still turn a profit. In fact, the next year was strong again. But to get there, they had to have a good sense of business and market dynamics.“We dared to keep on buying wool even when prices started to soar up from USD 0.70 to USD 2.30. We continued to buy wool despite the price increase, and we gradually increased our sale prices at the same time”, tells László Schneer. Since our competitors decided to wait, a shortage developed on the market and it created demand despite the increasing prices. This meant that they did not need to buy when prices peaked but were able to continually fill up their stocks while they followed the decelerating price increase and the start of the cotton harvest—because a good harvest could push down prices. It was a rollercoaster ride, but in the end they came out unscathed, they summarised.

They started the, primarily educational, ELITE Programme of the Budapest Stock Exchange and the London Stock Exchange in 2018 and make no secret of their intentions to use this opportunity to go public. This is a project for the next year or two, and they have the most work in the area of corporate governance. For their figures are strong—as shown by their continually increasing annual turnover, which was HUF 5.6 billion in 2018. The managing directors say that they have learnt a lot already; moreover, they have made a lot of new contacts.“For example, a few years ago, I would have used Google to find new business customers, now I have four or five phone numbers”, said István Szilágyi to illustrate how their social capital has gotten stronger. With this, he also shared one of the potential development paths ahead of Textúra Zrt.: acquisition. There are many potential enterprises that could be targets for an M&A transaction, as most of our competitors and many of our clients could become interesting in this regard in the medium run, they said. As the past thirty years have been about growth, it is time to strengthen the foundations now.

The shift of manufacturing towards Asia, due to the cheap labour there, along with the current labour shortage in Europe, have both been trends that have lasted for decades in the textile industry. Given this, and that robotics have still not appeared in the garment industry, owners think that machines might replace human labour in workwear production within five to ten years at the most. The competitive edge of local manufacturing will become weaker by then. But Textúra foresees the future in this regard: they plan to integrate finished product manufacturing to gain a further competitive advantage by focusing on small-batch, standardisable products.

Not only Textúra, as a company, has targeted the BSE; being listed has been a personal dream to László Schneer for a long time. A successful IPO would take their market visibility to much higher levels, benefit their business relations, and could be a valuable competitive advantage in public procurement tenders as well. Although raising capital on the stock exchange could be more expensive than what they can now get from banks, István Szilágyi sees an important difference here.“Banks don’t take risks—we do. At the stock exchange however, investors share our risk and our debts don’t increase, so we can proceed with more stability.”

Their direction is clear: as they see it, Textúra will be a listed company or will be going public in five years by the mid-2020s, will have already completed one or two acquisitions, strengthened existing market positions, and added a significant range of finished products to their portfolio.