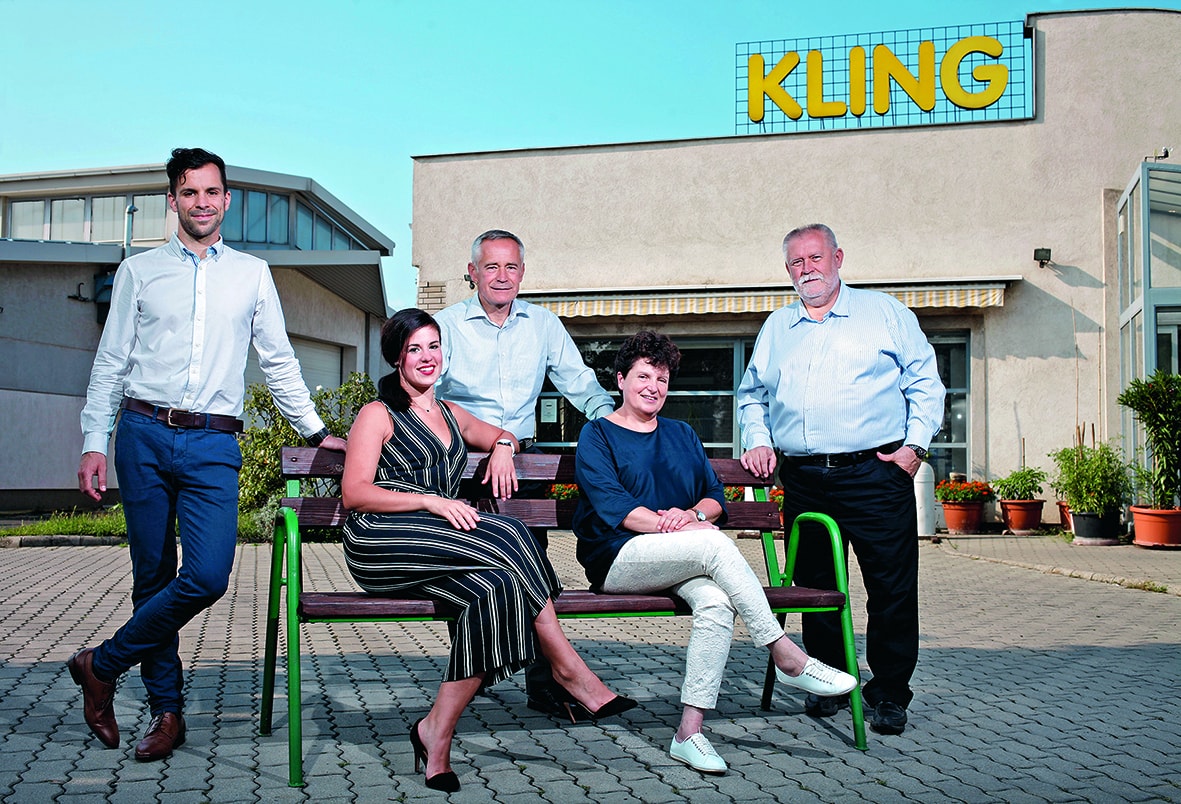 The father and even the grandfather of Sándor Kling and Imre Kling, the owners and founders of Kling Kft., built fences and gates. Their family name is also a well-established brand for garages and industrial gates. Their sign board proudly proclaims: “Kling Gate Technology since 1918.”

Sándor Kling Sr., his brother, wife and two of his three children work for the company, meaning that the business continues to be passed on from generation to generation, just as in the decades past.

The smithy, equipment shop and steel shop that his grandfather founded in 1918 were later nationalised, leaving them only the small fence-making smithy to carry on the business with. Their family has been making fences since time immemorial and almost every corner of Hungary has a fence built by their ancestors.

“My father and grandfather were craftsmen all their lives and had their own workshop and employees even in the 1950s and 1960s when it was very unusual to do so”, Sándor Kling relates proudly. As a result, their fences, and from the 1960s onwards their garage gates as well, became widespread in Hungary. First, they took an American invention, the Berry door, as the basis for manufacturing and installing simple tilting garage doors. They started to build the more modern sectional garage doors which consist of several pieces in the 1990s.

Three decades ago, the Kling family business had such an advantage at its start that only very few other businesses in Hungary had: its former generations had accumulated decades of entrepreneurial experience already before the political changes in 1989-1990. Their tradition is one of both prudent decisionmaking and an openness to innovation. Accordingly, they realised that instead of relying on old methods and principles, they need to integrate modern achievements into their operations, and especially into their product range. This attitude led to a contract with an established top American company, Raynor, that sells industrial and garage gates and which has been one of the leading suppliers of the industry already since the early 1990s. First, they resold their systems, but soon, partly owing to their traditions, they also started manufacturing as well after further developing and perfecting the know-how imported from overseas. Kling was able to rapidly adapt the American systems to Hungarian needs—a crucial step because the transport lead time from the US was too long, and had a negative impact on customer experience.

As they believe in offering the most complete client service possible and in diversifying their products and services, they also began to wholesale accessories and door parts. As usual, their goal was to provide the highest possible quality. Accordingly, the relevant products of the Japanese corporation Daihatsu currently make up the backbone of their product range. However, as expressed by one of the founders and owners, Dr Imre Kling, who has been working at the family business since the beginning, their main profile has always been manufacturing, and it still generates 70 to 80% of their revenues. This is so partly because there is such a need for customised products—an area in which the excel. Just like in the automotive industry, there is also a need here for colours and extras.

Although their development obviously slowed a bit after the 2008 financial crisis, it did not stop. In 2004 they began to set up an international sales network—an endeavour not without its ups and downs, considering that selling in the Ukraine and in Serbia is difficult even today. This is primarily because transport and business administration in these two non-EU countries involve a lot of problems, red tape, and costs. Furthermore, the conflict between Ukraine and Russia caused a labour shortage which made it harder to do business on the Ukrainian side of the Hungarian–Ukrainian border and in the inner regions of Ukraine as well. As good Ukrainian fitters went to work in the west, Kling has reduced its activities in the east. It is true though that they still have strong ties to Transylvania and southern Slovakia, where they have their own distributorships as well. In addition, they are also trying to promote the Kling brand in Austria and Switzerland through resellers.

Another aspect worth mentioning about the pre-2008 era is that they secured several orders for industrial customers, orders which became increasingly significant, because clients appreciated the value of having their gates made by a highly professional and experienced manufacturer.

At the same time, their international experience shows that the state perhaps still has a thing or two to learn about supporting medium-sized Hungarian suppliers in international industrial developments. As Sándor Kling relates, it is difficult for them to get orders from big companies, because the French companies operating in Hungary have French gates installed, and the German companies procure German ones. He says that even the Polish give much more support and encouragement to local suppliers. It would do much to promote Hungarian business if the state incentivised big Western companies with rules or discounts to favour Hungarian businesses more, not only in their production processes, but also in building of their factories, warehouses, supermarkets or other buildings.

This was a problem already before 2008, but which became especially problematic during their crisis. Although Kling was able to weather the storm, they also suffered from the budget freezes of industrial customers and the drastic shrinking of the retail demand. However, they reinvested all their capital in their business, thereby ensuring minimal credit exposure even during the toughest time, that is, between 2008 and 2011.

Not that they have any complaints at the moment: retail sales are booming, numerous institutions and companies are ordering gates from them, and they are fully using their capacity. The Hungarian market’s price sensitivity is, however, an obstacle. As a serious, respectable company, they cannot and do not want to compete with the grey market. Another challenge besides digitalisation and internationalisation is labour turnover, and market segmentation is also something that requires a lot of energy. Kling does not compromise even on its cheaper product lines. As a long-established business, they do not want to compete with shoddy products from Asia, but also have to stand their ground in the face of their highly-capitalised Western European competitors. This is not easy because the latter can easily sell their products on credit, giving their customers months to pay, and often have more capital when it comes to breaking into new markets or entering a price competition.

Digitalised manufacturing, as mentioned above, could considerably increase efficiency. In terms of finance, Kling is also considering various ways to raise capital in order to better compete with big international companies so as to market their quality Hungarian garage gates to even more companies and households. Clients they have worked for include Tesco, Auchan, Pick, Telenor, Bosch, Hankook Tire, DHL Logistik, BKV Zrt., Lego Hungary, Erste Bank, Spar, MediaMarkt and MVM.

Currently, the Kling family’s biggest and perhaps most interesting challenge is the changeover to modern equipment and processes. Luckily, two of the three youngest Kling children will continue the family tradition, but their creativity will play the biggest part in solving the “problems” of corporate governance and business development. Although Szandra and Sándor Kling Jr. are both around 30, they have been involved in the family business for quite some time. Dr Sándor Kling Jr. has a master’s degree in mechanical engineering, just like his father. In practice, his job is to digitalise their conventional manufacturing business—in every respect. He is responsible for ensuring that manufacturing is fully traceable and verifiable using IT methods, as well as for supervising IT operations. Under the supervision of his mother, Katalin, he is also involved in the HR aspects of the plant. Meanwhile Szandra, also an engineer, is responsible for modernising their marketing and sales activities. Together, they also determine the focus of the company’s CSR activities—an area which they take very seriously, as they provide support for sports and culture.