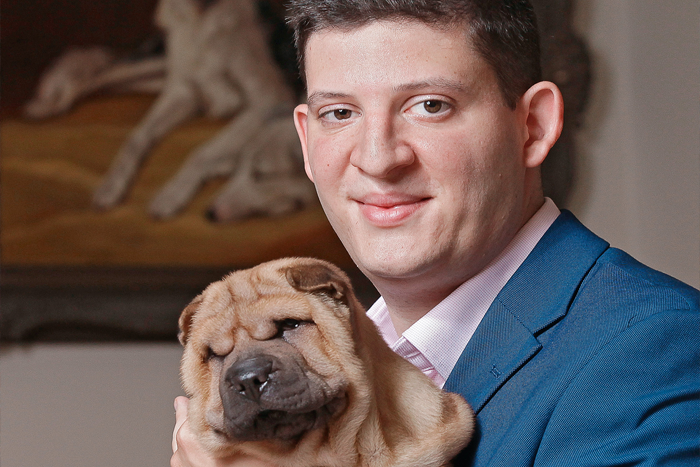 The company has come a long way: from the garage business set up in grandmother’s suburban house to securing an order from the Dubai Police. Panzi-Pet Kft., a pet equipment and pet food distributor, is not afraid of change: it has always reacted to the current market needs. It was thus that this family business was able grow to a dominant player on the Hungarian pet care market.

It was his grandfather, a pigeon fancier, who suggested to the founder Sándor Pandzarisz that he get involved in the pet food business with his wife, Judit Grósz Pandzarisz, in 1986 over 30 years ago. The Hungarian pet food market was quite underdeveloped in Hungary in the 1980s. While it was hard to get quality seeds in Budapest, ornamental birds and aquariums were quite popular. The patriarch of the family, who took this good advice, is still the alpha and omega of Panzi-Pet, or so Tamás Pandzarisz, his son and current deputy managing director, tells us. Judit Pandzarisz Grósz took part in the operations for decades. Today, she assists in strategic decisions, while their daughter, Diána, who chose to become a singer, is also present in the life of the company, working on the creative, social side and manages the social media sites.

They first rented a 20 m2 shop under the company name Napsugár Bt. in Újpest, on Templom Street. Fortunately, it was close to the marketplace, which boosted their turnover. In addition, they supplied seeds to many pet product wholesalers. After a time, Sándor Pandzarisz asked them for a discount in their prices instead of money in return, and thus began to add new equipment to their product range.

Panzi-Pet Kft. was founded in 1996, as a successor of Napsugár Bt. After that, they started to contact Western European and North American pet equipment manufacturers, and became exclusive distributors of many well-established brands. The company developed continuously, which was also demonstrated by the fact that, from time to time, they had to buy larger warehouses due to the increasing quantity and the expansion of the product range. Today, they have more than 17,000 permanent and many seasonal products, 500 of which bear their own brand. Feed generates 25% of their total revenues, even though this is quite a new field for them. In 2014, they moved to their current 3,000 m2 centre in Városkapu street from their 1,300 m2 headquarters in Zugló built to their own specifications. Though they had planned to keep this size for a long time, they have already outgrown the new warehouse and are now faced with the conundrum of how to expand further.

Animal feed appeared some five years ago in the life of Panzi-Pet, because (though they had a lot of equipment and also sold fish feed, for instance) their portfolio did not have everyday items that would generate a large turnover, like cat or dog food. They started to deal with pet food, which corresponds to 80% of the pet market, relatively late, because keeping inventory was quite difficult and they were afraid that the foreign brand would take over Hungarian distribution after a time. Cutting the Gordian knot, they created their own category. They came up with a product range – FitActive, a premium-category dry food – which was not manufactured by anyone at the time in Hungary. They followed the latest trends in creating the brand: it was important to also create hypoallergenic, chicken-free feed. At the same time, they wanted to have a fully Hungarian product made from a Hungarian recipe in a Hungarian factory, packed in locally manufactured packaging material bearing the design developed by their own local colleague. Their innovative product became quickly successful. They found a way to the largest Hungarian pet food supermarkets, then to the pet-care departments of non-specialised hypermarkets, eventually reaching almost the entire population. This Hungarian brand quickly became the leader within its category, and also won the Hungarian Product Grand Price a few years ago.

The time had come to conquer international markets. Export volume started to increase dynamically around 2012. Today, they are present in more than 40 countries, including beyond Europe, in places such as the Canary Islands or the Middle East. As competition is fierce on the pet care market, and there are a lot of national producers in Western countries, they decided not to expand in the West at all cost. In the view of Tamás Pandzarisz, it was a much smarter move to begin by developing the brand in countries where competition is not that fierce. For example, Panzi-Pet was directly contacted with an order to supply the Dubai police force with dog food, but they also ship to Spain and Germany.

At the outset, they outsourced the manufacturing of FitActive to Pamax Kft., who manufactured it based on a specific recipe, but the time came when they could not allow for interruptions in supply. It was for this reason that they decided to buy this manufacturer in Csévharaszt. Acquiring this business with a similar number of employees (about 50) was a “huge thing”, because it was the distributor who bought a manufacturer. However, they succeeded in adapting to the new situation, as they its potential, and today they even produce for others.

One of their customers is also a major player of the pet care industry, Julius-K9, a manufacturer and distributor of dog leashes. Its leader Gyula Sebő offered them a licence agreement: they give them the globally established brand in exchange for royalties, while Panzi-Pet manufactures and distributes the animal feed. “This was clearly a win-win situation”, says Tamás Pandzarisz. Because both the market and customer needs are developing constantly, and Julius-K9 is an internationally known and popular brand, they had to add something extra to the product. Accordingly, they were the first in Hungary to come out with a globally popular grain- and gluten-free “super premium” dog food (in which the substituting materials are lentils, potatoes or green peas) containing a Hungarian-developed herb formula which further increases the quality, prestige, and added-value of the product. Their cooperation with K9 is quite new: the new product was launched a month ago, and made its debut at the Nuremberg Interzoo Exhibition, where visitors from 50 countries showed interest in it and the company even secured firm orders, relates Tamás Pandzarisz.

They do not need to look for challenges: the deputy managing director briefly mentioned the issue of workforce and its shortage, saying that their situation is not easy, given that it is hard to find manual labourers and skilled workers. The recent years have seen a huge wage increase and a significant wave of emigration, though the situation is not as tragic in Budapest as it is in the rest of Hungary.

In addition to managing the company successfully, they also find the time and energy to help less fortunate, abandoned animals. Panzi-Pet is the main sponsor of both the Hungarian Animal Rescue League and the Hungarian Cat Protection Foundation, and they also support animal shelters in the agglomeration of Budapest. It was Diána Pandzarisz who came up with the idea of Panzi Heroes to encourage the adoption of sheltered animals. Luckily, today, there are almost 1,000 grateful dogs who have found new families, reported the deputy managing director with pride. Every month, about 10 to 20 dogs are adopted from each shelter, and each adopting family is given a starter pack full of gifts and feed.