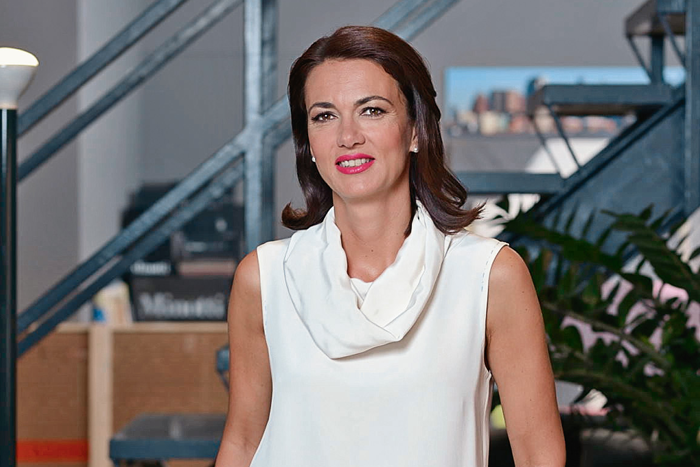 By joining together local builders’ merchants, újHÁZ Centrum turned the model of combined buying into reality a good two decades ago. Today, however, they are much more than a purchasing company. Our activities are more diversified, and we have more ambitious plans. The eighty dealerships and their owners are in a great measure indebted to the agile, ambitious company manager who succeeded as making her way as a woman in this male-dominated industry.

When it comes to the purchasing of building materials, the question of quantity – do we only need a few units or one-third of the annual output of a factory? – is something that matters. This is especially true for the construction industry, where, amongst other factors, high transportation costs mean that products and materials should be sold locally (within a radius of a few hundred kilometres) if possible. The expense of moving goods and products probably explains why constructors or individuals do not order bricks from the German or British warehouses of foreign webshops. Presumably, this is the reason for the lasting business model implemented by újHÁZ Centrum more than twenty years ago.

The company is basically a purchasing company under the co-ownership of construction material dealerships. Today, it is even more than that, it is a national sales network applying a franchise model, though it does not like to use this term due to the image associated with it. The latter was said by the company manager, Dr Csilla Rázsó Szórády. In her opinion, the key to their success lies within the fact that they keep operations on a human scale, people-centred, but still efficient, as they use the modern methods of multinational companies. This was the key to increasing their turnover to above HUF 50 billion in 2017. Currently, 80 building material dealerships bear their name and, counting the staff at the headquarters, the network and its partners have a total headcount of 1,400.

The roots of újHÁZ Centrum go back to 1996, when five construction material dealers in Győr, Hungary decided to join forces and get better prices and discounts from large manufacturers by combining their purchasing. This cooperation was so successful that the network partner dealers connected to the centralised purchasing system of újHÁZ Centrum had covered almost the entire Western Hungary region by 2002. At that time, however, all the construction material companies had their own image towards the customers; associated members could, however, already enjoy the benefits of joint purchasing. The five original founders did, however, recognise in time that the cooperation had grown too large and too fast, and that they could not deal with its expansion on their own, so they decided to hire an agile manager who could make their network a national one. 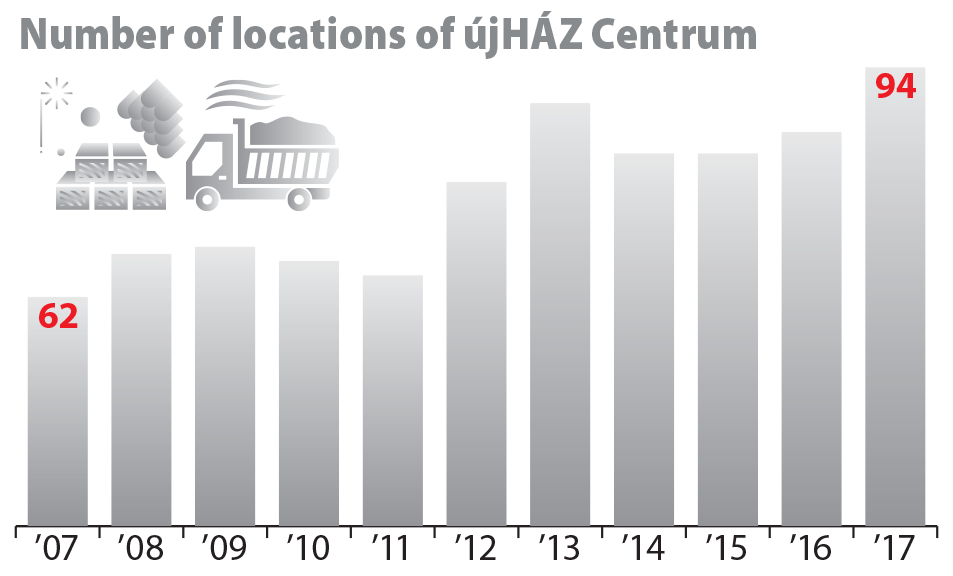 Dr Csilla Rázsó Szórády joined this (then still small) team as CFO in 2005. At her job interview, she convinced the owners of her competence, even though they had originally planned to hire a man for this position. It took Csilla five years of hard work to change the somewhat clumsy financial management of the company. They insourced accounting, renewed their hedging system that provided financial stability and, in 2009, they started their retail business under the újHÁZ umbrella brand. Back then, they went to Construma, an international fair of the construction industry, not only with a large stand but they also published a magazine of discounts and novelties for direct customers (currently distributed in 2.2 million copies). Until that time, this had generally been something that only multinational DIY malls could do.

Effects of the 2008 financial crisis were beginning to make their appearance on the market at that point. Finding a way for újHÁZ Centrum (which became a joint-stock company in 2007) in such times of crisis thus depended on the agility of the then CFO. “All the construction material dealerships were completely dead at the time. We had a few customers, but they made the construction material dealers in the region compete even if their prices were only a few forints apart”, she said.

Though the market started to recover three or four years ago, the company’s consolidated sales revenues fell in 2010 only, thanks to pro-innovation owners, planning, and continuous “building”. Our flexibility—which comes from our family culture – contributed to the company’s survival; but the real key to its success has been continuous development. In 2011, the network came out with its own-brand products; in 2012, it started to dynamically expand its product offer. The primary additions to its range included bathroom tiling and sanitaryware. Thanks to our continuous technological and organisational developments in the background, our annual sales turnover will come close to HUF 60 billion in 2018.

What is commonly called a “Tüzép” (a Hungarian acronym made of the two main types of products that you could buy in such shops: fuel material and building supplies) no longer has any resemblance its original namesake, Hungary’s former state-run hardware stores. This is certainly no accident. Some of the construction material dealers of újHÁZ Centrum follow the design of state-of-the-art malls; what’s more, they offer a much broader range of products than could have been imaginable even a decade ago.

Although they do not like the word franchise, they still direct their developments towards franchise-like operations. As the manager says, one must keep product portfolios in mind. It is just not enough if a new construction materials dealer offers concrete compounds, walling, roofing materials, lumber and a few accessories. Customers want to buy more and more things at the same place. Accordingly, a modern “Tüzép” or hardware store in Hungary should offer plastering materials, tiles, sanitaryware or even laminate flooring.

The current boom in the construction industry makes the situation of construction material retailers even harder, because it is not easy to continue providing an improved customer experience when the lead time for some popular building supplies is weeks or months long, due to the high number of residential construction projects running in parallel. The company has been able to successfully navigate market challenges in the past, which makes them optimistic now as well, to the extent that they also want to launch further developments in the coming years.