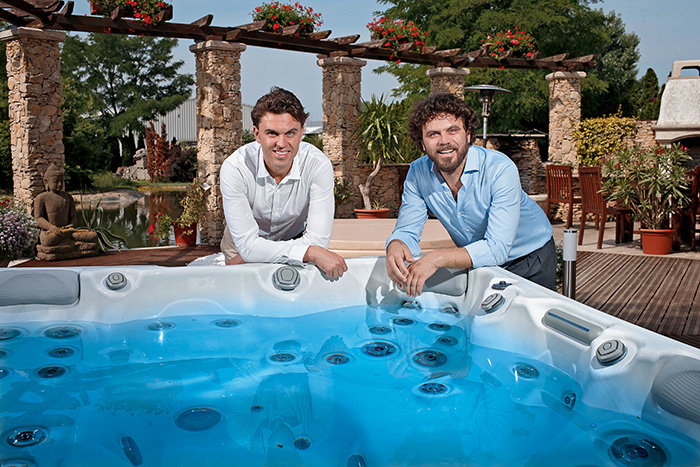 The Jacuzzi manufacturers from the “wild east” started out as the laughingstock of the first trade shows they appeared at; today, they sell the most outdoor Jacuzzis in Europe. Wellis dared to dream big: headquartered in Dabas, Hungary, the company became the market-leading manufacturer of Jacuzzis, a luxury product, in less than 15 years.

“We learnt a lot during the years, and made a lot of mistakes too, but that’s just part of being an entrepreneur”, says Zsolt Czafik, founder and CEO, as he relates the winding and difficult path they have followed. It was an Italian wholesaler at their first trade show in Bologna who told them that they would learn manufacturing the hard way. And he was right: the acrylic they were using at the time for making the tubs was not of the best quality, and they ended up having to throw out a few truckloads of products. As his brother, Ákos Czafik adds, they had to invent the entire production process, because this industry did not really exist in the early 2000s, either in Hungary or in Europe. Together, the brothers have made the business successful together, and Ákos is now responsible for export markets. At the time they did not have the specialists, machines, or know-how, so they proceeded through trial and error. But it worth it: after last year’s HUF 8.8 billion in revenues, they plan to achieve an income of HUF 12 billion and a headcount increase of 10% for this year.

Zsolt Czafik’s flair for commerce showed up at an early age: at the end of the 1990s, when he was still a teenager, he returned from a backpacking trip in Asia with two suitcases filled with jeans. This is where the jeans wholesaling business, the basis for the future Wellis empire, started: they made the Full Moon brand a success, as they distributed hundreds of thousands of pairs in Hungary and throughout all of Europe. The later CEO saw the steam cabins and hydromassage tubs in China, during one of his business trips in the jeans wholesaling business in 2003. The area itself was not unfamiliar to them, because their father had a bathroom fixtures shop in Dabas, Hungary. Even as a child, he could spot the special pieces with apertures injecting bubbles into the water among the monstrous, cast iron grandma tubs, remembers Zsolt Czafik, who immediately discovered the business opportunity in this market segment Europe which was still forming. He and his brother decided to give it a go.

Soon, a few containers of finished hydromassage products arrived from Asia to Hungary. Due to various quality issues, they then had to dismantle and reassemble them – in the worst cases, this happened at the customer’s premises. As a result, from their beginnings in 2004, they established the assembly process in Hungary, which seemed safer. This enabled them to not only eliminate quality problems, but also to customise some products, which meant a great competitive advantage. After a few years, they wanted to get to the next level, and started to prepare for manufacturing in Hungary.

Then came 2008, a year that sank into the memory of many businesses. Everybody told them that they should not set up a manufacturing plant in the middle of the crisis. At the time, however, they were ready to start: they had the funds, the steel frame for the production hall was already standing, and they decided to carry on with the project – a decision which later proved to have been the right one. Manufacturing started at the Dabas plant in 2010. Due to the downturn in the construction industry, their sanitaryware business practically stopped during the crisis. Meanwhile, the demand for outdoor pools remained healthy in Western Europe, which pulled them out of the slump. This required the right strategic decisions: they closed the larger part of their sanitaryware business (similarly to the jeans business) and invested all their capital into the outdoor pool and hydromassage business. This meant that the ratio of sanitaryware shrank to a few percent in the total sales, but they are coming back to it today: this area now generates 10% of their sales revenue, and it is expected to increase further in the future, in parallel with the expected boom in homebuilding.

The manufacturing and supply of Jacuzzis follows a structure like that of cars, explained Zsolt Czafik. They have basic models that can generate hot water and bubbles, with optional extras available as well: more nozzles, higher water pressure, colour therapy, remote control, water disinfection, streaming, and better thermal insulation. The price range goes from EUR 3,000 to 4,000 in the entry-level category up to as much as EUR 35,000 depending on size. For this amount, the customer also gets comprehensive installation and maintenance services together with the tub, and it is no wonder that most of their production goes for export: 80-85% of the products go, through about 400 foreign resellers, primarily to the Scandinavian, French, British, and Benelux markets. This means thousands of Jacuzzis a year; more specifically, they plan to push the annual output to 10,000 units, which would cover 10% of the European outdoor Jacuzzi market. It is quite rewarding to compare themselves with the second largest manufacturer, a Spanish company, that manufactures “only” 2,500 pools and tubs a year.

A solution must, however, be found for the largest challenge of the company, and the entire Hungarian economy: the labour shortage. The Wellis Headquarters in Dabas has a headcount of about 500; due to the 50% increase in sales, however, they must expand, which is quite difficult. This is especially pressing because they have the machine capacity: launching a second and a third shift, would allow them to triple their current production output. Robotics are also basic equipment at Wellis: they have four robots operating in the manufacturing of tubs, and the fifth is on its way. This will punch holes in pools; it can punch hundreds of holes in a premium pool in an hour, replacing three hours of work by two workers. They also manufacture the base and side plates in Hungary, similarly to the tub body. They make them with vacuum forming, and they import the raw material (acrylic sheets) from the United States. Electronics are supplied by a Canadian company, while the nozzles and other parts come from their greatest international suppliers to Dabas.

The owners, still in their thirties, have a vision of becoming leaders of the global market, to offer the best products and to break into the American market, which is considered the home of Jacuzzis. Even a 1% market share there would mean thousands of units to the company. They are not sitting idle: they have a successful “roadshow” behind them, and plan to take their pools to a trade exhibition in Las Vegas in August. They will map demand and see how a European product is received. A little-known fact is that American and European Jacuzzis have different designs; hence, one must be very good at catching the taste of Americans, and to properly target the demand for European design. If they can see the right demand, then the next milestone could be setting up an overseas factory, either as a greenfield investment or by buying an existing manufacturer. Their confidence is bolstered by their achievement of becoming the third largest player on the British market, which is similar in its tastes to that of the US.