The soul of a galvanising factory - GalvanPlastik Kft. - Bet site 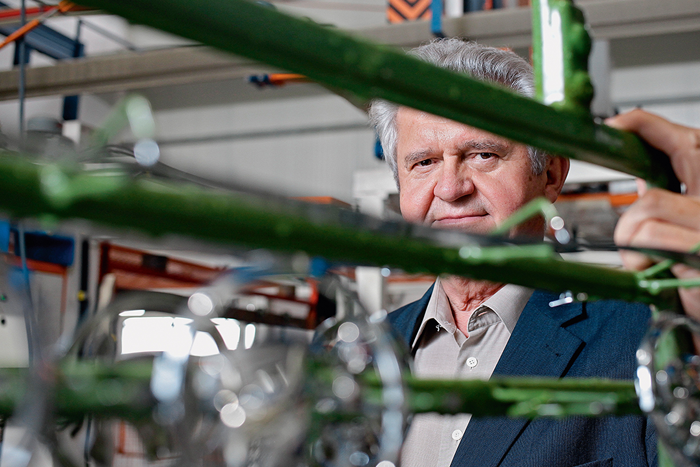 Károly Palásti was forced to start his own business, a plastic galvanising plant. Today, however, he thinks that there is no major car manufacturer they are not supplying.

Their story began in 1989, during the political changes. Károly Palásti, now the managing director of GalvanPlastik, started his first family business at the time. The company worked in trade for a long time, then, 15 years ago, their galvanising plant in Székesfehérvár went bankrupt. The liquidation process revealed that they, the owners of the site, would have to bear the risks and responsible storage of the hazardous waste in the 1,500 m2 factory hall. Destroying such chemicals would have then cost HUF 100 million, and they could not sell the waste or the plant.

Károly Palásti then contacted suppliers and started to learn the technology, and he found an opportunity in plastic galvanising. He had a degree in metallurgical engineering, and had also studied chemistry, so this field was not entirely new to him. The technology is quite rare, even in Western Europe, but the demand is quite significant. Galvanised plastic (which has a metallic colour) is widely used in e.g. the automotive industry, for sanitaryware, and in electronics. (The multistage process involves the application of a thin metallic layer with electricity onto a plastic surface.) They used their savings to fund galvanising. They signed the first major deal with a multinational company, Samsung, who ordered millions of units.

This activity requires special skills: it takes long months, or even years to learn and experience the precise technology. The value of a galvanising plant lies in experience. “Each galvanising plant has its own personality and spirit. Product quality depends on more than a hundred parameters; you can control twenty or thirty of them, but the rest lies with the experience and competence of the professional overseeing the production process”, explains Károly Palásti. “I spent days and weeks there, I spent long nights without sleeping a wink in the plant until I learned it”, he adds.

The quality control over injection moulding meant a competitive advantage to GalvanPlastik on the market. This enabled them to reduce rejects and they could control the aesthetic quality of the product. It is typical of the industry that the customer reimburses a certain percentage of rejects. It is thus in the fundamental interest of the manufacturer to reduce the ratio of rejects below this percentage, because it can produce extra profits in this way. Quality assurance plays a key role in this sector, as the automotive industry has very strict requirements. A ring to be installed into a car radio, for instance, the surface of which is only a few square decimetres, cannot have more than three dots. These however cannot be larger than 0.2 mm in diameter, and cannot be close to each other. The responsibility of quality controllers is therefore huge.

The company started to explore new markets right after the Samsung deal in 2003. They went to a lot of exhibitions and fairs. Orders came in quickly; they realised what a huge demand there is for such capacities. “We were practically hiding from our customers, because our capacities were completely booked”, says Károly Palásti. If their single production line was operating, they could not take any new orders. Accordingly, they had an opportunity to expand the plant.

The company provided most of its services to the automotive industry. There is hardly any large automotive factory to which they do not ship. For example, GalvanPlastik knows the precise number of Rolls-Royce cars sold in any one year, because they manufacture the steering-column switches for these luxury cars. Capacity management is not an easy task for automotive suppliers. They can run a production line at 80% capacity, because they never know when the car factory might increase the order quantity, and as the supplier must deliver that with tight deadlines, the supply must be continuous. The company supplies mostly to multinational companies, producing about 20 million products annually.

GalvanPlastik is a family business, they own the company through multiple other companies. They have already received many take-over bids, in 2016-2017, for instance, four larger European companies, including the largest German investment fund, wanted to buy it. The owners, however, decided to exploit the potential that their business offered. The average age of their employees is low (they have a headcount of 130); hence, they will assuredly have a qualified workforce in the future as well. Given this typically male-dominated profession and industry, one might think that their staff would be only men; however, they have a high rate of female employees, at over 50%. The owner is very proud of that; and his daughter and son also work for the company. This is another reason why he does not want to sell GalvanPlastik, because succession is ensured in this respect as well.