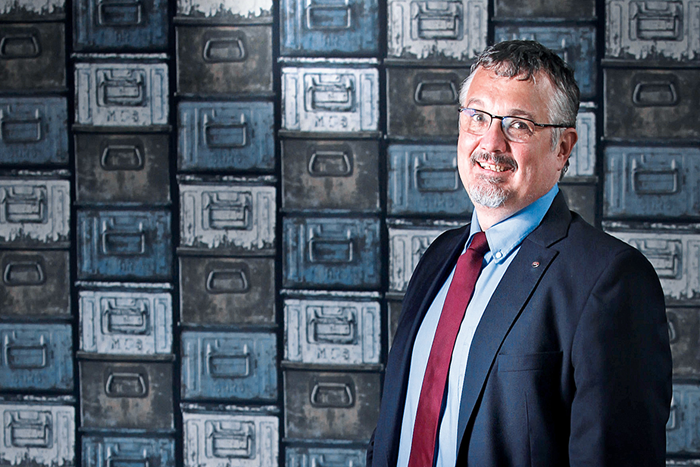 Gamma Digital Kft., a two-decade-old industrial automation company, deals with system integration and develops self-driving forklift operating systems and customised control engineering data collection systems. The 100% Hungarian company is committed to Industry 4.0. It designs and implements cutting-edge solutions for the pharmaceutical and automotive industries, and for intralogistics. Due to the results they have achieved, the management of this medium-sized enterprise with 120 employees has recently been contacted by both Hungarian and international investors.

The company’s headquarters and modern office are in the 11th District of Budapest, in a historical building complex. In the mid 20th century, this was the home of the legendary “Gamma” Light Engineering and Optics Works – a developer, manufacturer and supplier of aiming telescopes for the Hungarian army during the war, and a manufacturer of geodesy and cartography instruments, as well as medical microscopes. The so-called predictor, an analogue computer (for determining the parameters of aerial targets and the ballistic data for firing) which was regarded as a modern device and was exported to many countries at the time, was also produced by Gamma Works. The corporation developed in the fields of light engineering and electronics, and supplied custom measuring devices for power plants, oil refineries, and other large factories. Similarly to its large competitor, MMG, the corporation fell apart into many smaller units after the political changes in the early 1990s. One of these smaller units was Gamma Analcont Kft., which was formed with 50 employees, from the industrial control engineering department of the socialist corporation that used to have 3,000 employees. This is where Dr László Szilassy started to work. An electrical engineer who graduated from the Technical University of Budapest and studied at Aachen University in Germany, he got his PhD with a dissertation on nuclear measuring devices. Many spotted his skills and innovative mindset, so he was invited to be the general manager of the company during the years of dynamic transformation following the political changes.

Gamma Analcont also worked for the largest, central clients; the general manager, who had dynamic, complex systems in mind, wanted to implement various, technically forward-looking projects in different fields of the industry. He and his friend & co-worker, Pál Sándor, a physicist, left the world of analogue measurement technology, and, by forming their own company, Gamma Digital Kft, turned to the digital world which was expanding at the time, focusing on industrial IT.

Industrial IT took centre stage in their work. They started to focus on large custom machines and systems and their operating software applications that large corporations use on their production lines and in their industrial logistics.

The prominent members of the pharmaceutical industry, such as Richter, Egis, Teva, Sanofi or their legal predecessors, soon became their returning clients. They dealt with the designing, development, and commissioning of new systems until the end of the 1990s, when tasks started to become more and more complex and they had to serve an increasing number of sites, sometimes abroad as well. The continuous expansion of their international presence is a priority for the company.

Besides pharmaceutical companies, the automotive industry was the other target segment: they delivered to the Szentgotthárd Opel factory when they still assembled Opel Astras. Later, other Hungarian car factories, such as Audi or Daimler, and their German suppliers also became their key clients. In recent years, they designed and implemented many robotics, intralogistics controllers; moreover, they have also worked in the German factories of these companies on several occasions.

The managing director is aware of client expectations, and he, together with the specialists at the company, always keeps these needs in mind and works to find and provide the best and most efficient solution for the entire system of the client’s manufacturing or intralogistics needs. At the beginning, the company’s main profile was the designing and commissioning of various controlling PLCs. Due to their simplicity, they can work almost faultlessly, even for decades. Later, they acquired special skills in SCADA systems that supervise structures and collect data from PLC-controlled equipment. The next level was, based on the needs of their existing clients, the development of a complete, customised Manufacturing Execution System (MES). The continuous development entailed the gradual growth of the client base; consequently, they increased their sales revenue by 10% every year. Among the key activities, the company now gives priority to intralogistics, i.e. the internal material movements in factories, because this field offers enormous development opportunities all over the world, and it is worth investing in further developments if one has a solid base to rely on, as a significant portion of the revenues of the company is from this field already.

Gamma, a company that applied the Industry 4.0 principles in time, has always had a good intuition for using and further developing state-of-the-art digital technologies. In this spirit, the highly-qualified and motivated engineering team had new ideas that could keep the company on a track of growth on the long run as well. One of the teams has already started to work on the spectacular further development of the already-mentioned SCADA systems, while another group has designed special data-collecting units and monitoring systems for large, automated industrial warehouses. In addition, these structures communicate independently, without internet or Wi-Fi access, through their own devices, which adds to the robustness and reliability of the Gamma Digital systems.

To support their innovative and future-oriented mindset, they set up a separate R&D team in 2017. The most spectacular development of the company is the control system for self-driving forklifts (AGV). They are now developing the second series, a joint development project with the University of Óbuda and the Péter Pázmány Catholic University in Budapest. Due to the increasing labour shortage, clients are becoming increasingly interested in this solution, which can, on the one hand, perform manufacturing and the intra-warehouse supply chain tasks in an optimised, transparent way, without a driver, and, on the other hand, operate with a high degree of security, completely eliminate crashes, satisfying the needs of manufacturing processes, all in a 100% automated approach. In addition to the entire fleet-controlling software, the company’s engineers also take part in the so-called firmware development of the vehicles, says László Szilassy.