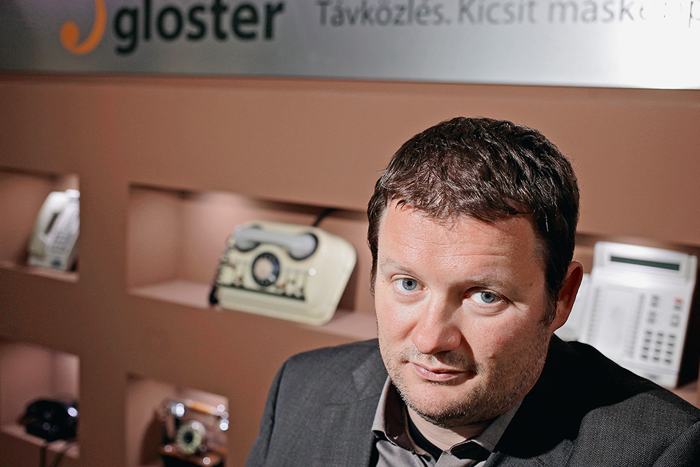 Viktor Szekeres, the owner of Gloster, started from nothing to build up his medium-sized IT & telecommunications company that now has a turnover of HUF 1 billion.

His father, and even his grandfather, used to be traders, so Viktor was exposed to business-minded thinking from his early childhood onwards. In his college years, he started working as a part-time salesman at Amtel, a small company where he sold telecommunication services that could considerably reduce the domestic and international phone bills of small businesses.

Once he started his career, he made much more deals than his colleagues and was much more agile. He soon wanted to implement his own ideas, so he found a telecommunications engineer and together made the following offer to their clients: they would streamline their processes so that all their employees can always make their calls through the discounted phone number. He soon realised that selling, installing, and maintaining corporate telephone exchanges was a much more profitable business than selling discounted telephony solutions, so he founded Gloster Telekom in 2002.

He and his specialist colleagues studied the functioning of more than a dozen telephone exchanges. Viktor’s strengths lay in getting the business and building up the company, while his partner was good at the technical and engineering aspects. By the time of the crisis, they had built up a small company with an annual revenue of HUF 60-70 million and three dozen clients, and were working in a 50 m2 rented office in the 14th District of Budapest. In 2009 however, their paths parted, because Viktor thought that the future would be about internet telephony (VoIP), while his co-founder would have kept the company in the domain of conventional telephony. “When the first VoIP solution came out in 2005, only the most daring and serious tech fans could imagine that the Internet could be used for phoning as well. The veterans of this profession did not really believe that this technology would take over the sector and push out old solutions so quickly and so spectacularly”, the owner of Gloster tells us, speaking of the background to this big change.

As a young dynamic manager he recognised that he could speed up the professional development and market expansion of the company if he backed the global IT giant Cisco. As at the time, Cisco (known for its network solutions) was looking for – amongst others – small partners like them all over the world. Among the small companies in this field, Gloster was perhaps the boldest. Accordingly, they got a lot of orders and access to a lot of major clients thanks to Cisco. The innovative attitude of the Hungarian company soon bore fruit. “Even today, I am very proud of my engineers because of the enormous amount of knowledge that they have accumulated”, notes Viktor Szekeres.

This development and the new market needs led to the setting up of various new business units: active networks, i.e. routers, switches, firewalls, company WiFi networks, IP contact centres, and then IT security as well. As a result, revenue grew from HUF 400 million to 1 billion in recent years.

According to the owner, they were not really affected by the crisis, because IP telephony was a new technology that reduced costs, increased efficiency, and that was backed by a very strong international brand.

Six years ago, to build their independent, modern headquarters (six or seven times larger than the small office in Zugló) in Nagytarcsa in an industrial park next to the M0 motorway, they applied for financial support from the state.

Their number of orders has grown very rapidly, thus their greatest challenge at the moment is not the acquisition of new orders, projects, but labour shortage. “Ten years ago, you were a good company manager if you were good at sales. Fortunately now orders are pouring in, but the bottleneck is finding somebody to do all the work. That’s why today, a good business leader has to be good at communicating with people, he or she has to be able to energise, motivate, and inspire them or help them learn to work together; meaning that a good business leader has to be a HR manager and also has to build up a management team that can retain existing workforce and attract new employees as well”, summarises Viktor Szekeres.

This practical-minded company owner, still agile today, translated this philosophy to the level of day-to-day operations: in early 2018, he appointed the sales director of the company, Tibor Kiss, as company manager. “Tibor came into my office and had the courage to tell me what areas of our company still have room for improvement, in our organisation and management, in terms of day-to-day communications with people. Over the last 16 years, he was practically the only person in the company who dared to tell me in an open and straightforward way what I was doing wrong, so I quickly recognised this opportunity and gave him the chance to finally show how it could be done better. His style of management is completely different from mine, which is normal, and I think it is good for the team. I now finally have time for strategic issues, top-level sales, so the company can be much more efficient”, explains Viktor Szekeres. He quickly adds that he sees himself as a lucky man, because his wife fully supports him in reaching his goals. She actively helps him, because Kata is a marketing specialist and a coach; so, in addition to helping to build up the Gloster brand, they are able to discuss the dilemmas regarding the growth of Gloster, which is very important in everyday life.

Although they have moved out from the downtown area, many employees are happy about that, as they do not have to commute long hours every day. And the always active, youthful manager simply does not stop. He is currently building a new, modern building (of the same size as the existing one) in the Nagytarcsa industrial park, as a part of a larger project to strengthen his SME with acquisitions as well. Strategic expansion started a few months ago with the first acquisition: they purchased a majority share in a small telecommunications company (with a construction profile) with six to eight employees that installs low-voltage systems, and that did the cabling of network equipment and telephones for Gloster in its buildings. This, however, was only the dress rehearsal, Viktor Szekeres wants to purchase more companies in the industry. His goal is to build up an IT company with about 40 or 50 employees, generating HUF 4 to 5 billion in revenues, and with an EBITDA of HUF 1 billion. This spectacular growth might draw the attention of larger competitors as well. This dream is, however, hard to accomplish with bank loans, so they are thinking about the Xtend market of the Budapest Stock Exchange and are looking for other capital market instruments instead of bank financing. The company is a committed fan of the BSE ELITE Programme, and their plan is to join it this year. This provides international training programmes on the international capital market and an international network for small and medium-sized enterprises who want an alternative to bank loans in their quest for faster growth.