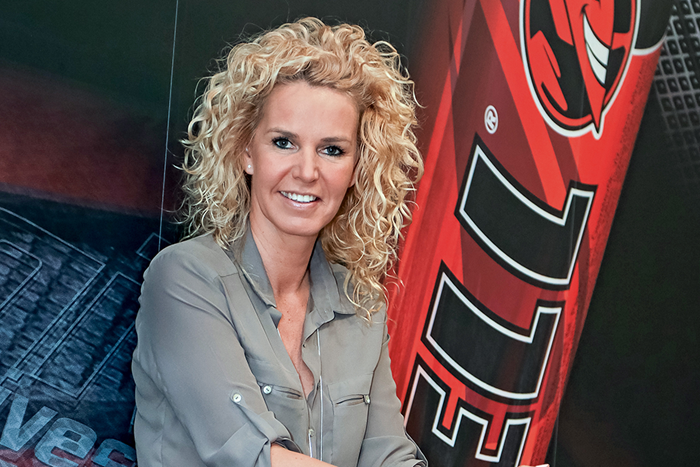 The owners of HELL ENERGY dared to dream big. They started from scratch and, in a few years, became leaders on the Hungarian energy drink market. The 100% Hungarian owned company makes 4.5 million cans of energy drinks – decorated with a demonic head – per day, and ships them to 50 countries around the world.

The visitor enters a futuristic environment in the HELL ENERGY Factory next to the town of Szikszó; the high-tech production lines and robots make the energy drink automatically, almost without any human intervention. This company in Northeast Hungary is very serious about development: they have become almost entirely self-sufficient in 10 years. In addition to the canning plant that has been running since 2011, they also have their own can-making plant, which is unique in Hungary. And there are no limits; they are continuously expanding their capacities, and will be making seven million cans a day in 2019. This means that they have a good chance of increasing their annual turnover above HUF 40 billion.

HELL ENERGY was started as a family business a bit more than 10 years ago, back in 2006. Then it became a multinational family corporation, still in 100% Hungarian ownership, said Eszter Anna Tóth, the PR manager. The owners, who are also siblings, take part in the day-to-day work, keeping decision-making quick, a characteristic of family businesses. They have, however, grown so large that they have had to integrate the efficient operating processes of multinational corporations into the organisation. Today, they have more than 700 employees. This includes the offices in Miskolc and Budapest, their representatives abroad, and 400 workers in their factories.

Being at the right place in the right time is very important for starting a business, but it is not enough. The owners used to have a confectionery and chocolate wholesaling business in Miskolc. To expand their portfolio, they started to sell energy drinks as well, and it turned out to be a good decision. The new category became so successful that they decided to give it a go and make their own energy drink brand. This was the point where many entrepreneurs would have failed, because most people would want to be completely in charge of production and to make the greatest profit possible with the least possible investment. HELL’s key to success however was that its owners were thinking big and were perfectionists. Their business approach focused on providing the best quality, searching for new things, and having a global impact in everything. Right in the first year, they contracted the AT&T Williams Formula 1 team to establish a basis for the international reputation of the brand. And recently, they won a world star for the brand: Bruce Willis opens a can of HELL in the company’s advertising campaign.

Success required precise goals and continuous development. Their target was the market niche below the price level set by the Austrian company that created the category of energy drinks, and their goal was to be present in as many shops and supermarkets as possible, right from the outset. Today, their distribution ratio is above 80% in Hungary, which is outstanding on the market. The opening of their own canning plant in 2011 was an important milestone in the history of the company. They had used foreign suppliers to can their energy drinks, which was not profitable in the long run. They reached the output of 2 million cans per day in 2016, so they installed a new canning line. This year, they are commissioning the third canning line, so they will be able to make 4.5 million cans a day, which will then increase to 7 million cans a day.

The two energy drinks are very different, even though most of them still have the classical tutti-frutti flavour. HELL uses pasteurisation to ensure the shelf life of its product, i.e. they do not add any preservatives to their energy drinks. They quickly assuage any doubts regarding unhealthy ingredients, as HELL energy drinks do not contain anything that we would not consume, such as – in addition to sugar and caffeine – vitamin B, carbonic acid, or acidity regulators. The most important and most expensive ingredient is sugar, the source of energy. In addition, the standard 250-millilitre can contain 80 milligrams of caffeine, or the equivalent of one cup of medium-strong coffee. It is an interesting fact that they do not add taurine to the HELL cans sold on the Hungarian market due to local tax laws, but they do so for most of the cans destined to international markets.

These millions of cans have a great many destinations: beyond Hungary’s borders, they are market leaders in nine countries and ship to a total of 50 countries. In many countries, they are represented by distributors who must meet strict criteria: they must make HELL one of the top three energy drink brands in the country within one year, then the brand must become the market leader in three years. A large majority of their output goes to international markets. Their biggest markets are Romania and Azerbaijan, in the latter, they have become so popular that HELL has almost become the national drink.

The basic flavour of the energy drinks is the well known tutti-frutti, which continues to be the most popular type. HELL introduced the first, alternative (red grape) flavour back in 2011, and it was very successful. Later, they extended the range: their drinks are available in sour cherry, kiwi, or white peach flavours. They pay a lot of attention not to change the flavour of the product if they buy from a new supplier: new raw materials are thus always subjected to strict tests. One of the reasons for their manufacturing in Szikszó is that the water tastes different anywhere else, so the final product would not be the same if their location were to change. Water from their own wells makes up 90% of the drinks.

And as for their own water – HELL also owns the large piece of land next to their current factory; land which they want to use for the expansion of their empire in the next 10 years. With regards to expansion, it is not enough to talk about the energy drinks alone. Their portfolio has a much wider range. HELL is also the owner of Avalon Park, a chain of hotels, restaurants and entertainment units, just like the unique and quality design Angel Petrol station next to the motorway under construction and the Angel Station car wash and garage.

They are well ahead of the market in terms of innovation as well. They have patented a can tab which can be opened with the fingertip instead of the nails, and won an innovation award for this. They now make most of their drink cans using this solution. They not only apply the highest standards in their manufacturing processes, but have also developed a ground-breaking logistics solution: a completely automated, 30-metre-tall warehouse is under construction right next to the factory. Pallets and the goods on them will move on a closed-track, computer-controlled system here; so the operator will only have to enter the order quantity and the target country, and the system will select the cans, their filling and packaging, and will even will load them onto the trucks as well. After that, all that is needed is for the drivers to step on the gas pedal.