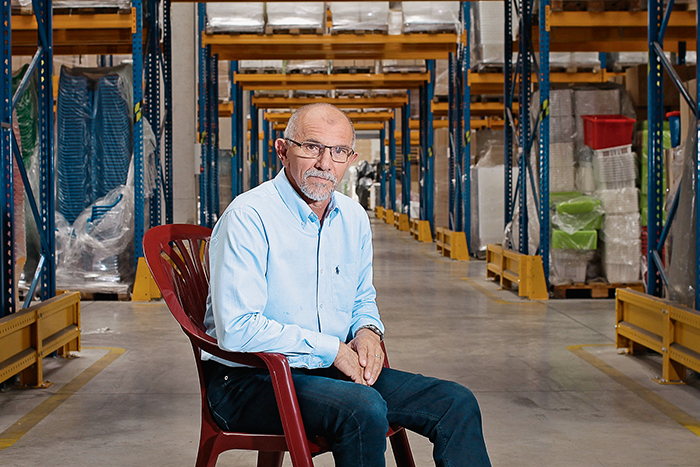 It took a great deal of industry knowledge, and just as much precision engineering, passion, and business acumen for Star-Plus Kft. to become one of the biggest Hungarian-owned plastic processing enterprises that has been continuously profitable since it was founded 27 years ago.

His father had been the village smith – this is how György Tóth explains that he got used to hard work early in life and learned the value of being your own boss in your own company. He started studying languages in primary school. In the 1960s and 1970s, as everyone was talking about plastics and their increasing use, he chose this as his university major. He studied for a degree in plastic processing engineering in the GDR on a state scholarship. Upon returning to Hungary, he found employment at the Borsodi Chemical Plant. In 1986, he also obtained a university degree as an engineer/economist with a specialisation in foreign trade. He continued studying, earning a degree in management with a specialisation in financial analysis and an MBA.

He was always interested in becoming self-employed. Then, when the regime change happened, he “left the company Audi and executive directorship without a second thought, getting a used Lada from my parents instead”, and bringing it as capital, founded his own company with an Israeli partner in 1990, then bought out his partner in 1994. First, he rented injection moulding tools from Israel, using Hungarian processing capacities, producing items in short supply at the time in large quantities: high-quality household items and garden furniture. In 1994, he bought his own production factory in the town of Nyíregyháza and gradually ceased to use sub-contractors. The second factory at Felsőzsolca was opened in 2000. Expansion was continuous, and they bought the Dutch company Flair in 2006, along with its entire product selection, manufacturing equipment, the corporation’s Hungarian companies, production base, and the brand rights.

As they excelled at predicting consumer needs from the very beginning, the first couple of years were fantastically successful. By starting their own production, and given the decrease in opportunities for renting equipment, they put more and more of their own products on the market, and had to increase their capacities. This required a significant amount of money compared to the company’s size at the time, therefore they were soon faced with the fact that the Hungarian market of 10 million would not be enough to make these investments profitable over a reasonable period of time. Therefore, as of the mid-1990s, they had to find export markets, which required cost-efficient, high-volume production. Today, they regularly export to over 30 countries. While their biggest markets are Germany, England, Denmark, and France, the other countries in the region are also important.

In the Western European countries, they had to make up for the transport cost over 1,200 to 1,500 kilometres, which accounts for approximately 10% of the EUR 10,000 to 20,000 value of the products carried on one truck. As injection moulding machines were very expensive in Europe, György Tóth bought equipment from Asia even back in 1994: first from Taiwan, then from South Korea. After a few more years of searching, he decided on a good value Chinese manufacturer of injection moulding machinery. Today, they also buy the auxiliary devices from the region. First, the entrepreneur had to deal with the reluctance and prejudices of his employees. He had to convince them that they had to trust themselves with the operation, maintenance, and if needed, repairs of the machines, as spare parts could be acquired from anywhere in the world in a matter of days. They are now so comfortable with these tasks that it only takes them a few days to put together and install the machines that are often shipped disassembled. The machine manufacturers respect their expertise so much that they have tasked Star-Plus with machine installation, maintenance, repairs, and operator training for multiple countries.

György Tóth, the company’s founder and executive director foresaw the future in time: since the early 2000s, the motto of the Miskolc company has been “robotisation”. They started to replace their existing machines with new injection moulding devices that could communicate with robots, and they installed them along with the robots. This way, they could plan production better, product quality became more stable, and they could become the European suppliers of international trade networks. Today, they often receive orders for 16 to 18 countries, two-week time frames, and lots that fill 40-80 trucks.

For ten years, they have been using their knowledge and capacities in the production of electronic goods, supplying both Hungarian and multinational corporations. For some, they also offer just-in-time services on an ongoing, 24/7 basis. Electronic products currently account for half of Star-Plus’ revenue. They are careful not to become overly dependent on any single partner; none of their clients provide more than 30% of their yearly revenue. The company did not really feel the 2008 crisis either; given their turnover of billions of forints, their revenue “only” decreased by HUF 200 million. According to György Tóth, they managed to get through the crisis relatively unscathed due to their good product portfolio. Production of own-brand and OEM products is relatively balanced: 60% for own-brand products and 40% for customers, and they intend to keep it this way.

Today, more than 340 people are employed at the company, but in the past, this number has sometimes exceeded 400. This is where the biggest issue of Hungarian society, the labour shortage, comes up – it is especially an issue in plastic processing, a field that requires many manual and skilled labourers. High employee turnover has a detrimental effect both on quality and on the need to constantly increase efficiency. As the biggest local Hungarian employers, they have a good relationship with the University of Miskolc: many students do internships with the company or write their thesis with them. They recruit two or three freshly graduated engineers every year. Regretfully however, the executive director notes that they rarely “stick”, as spending a couple of years at Star-Plus is considered a good jumping board into the profession, and they can easily find employment in other cities, at other companies afterwards.

The last 27 years have brought both Star-Plus Kft. and its founder a lot of recognition. The Europe’s Top 500 membership invite, awarded in 2011, the AAA bisnode rating they have held for years, the Top 100 Economy Prize, the 2012 Entrepreneur of the Year recognition, and the 2016 Pro Urbe Prize all confirm that they are on the right path, and other market players respect their performance.

György Tóth sums up his motivation as the desire to build a recognised, distinguished, reliable business that works well, “that the world needs”, and that provides workers with not only a livelihood but also an opportunity for self-actualisation, so that they can proudly say to their friends that they work for Star-Plus. He adds that this should still be the case in 5, 10, or even 100 years. The company receives acquisition offers, but Star-Plus itself has three or four acquisition negotiations every year. In the long run, he does not rule out the possibility of adding a partner if this brings stable growth and a new, secure market background – that is to say, the direction of future development is still open.