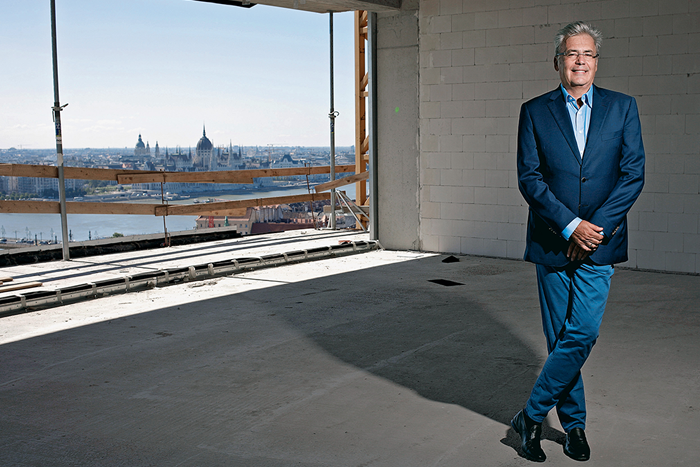 Attila Tóth regards his nearly 30-year-old business as an intellectual workshop, which is also expressed by its name: CÉH Planning, Investment, and Development Plc. As a community of people who think and do the creative work together, they were able to emerge even stronger from the crisis that hit the entire construction industry.

One could even call it the grey eminence, although CÉH is one of the largest architectural & engineering design offices in Hungary. Though they are involved in many grand architectural projects, attention at the opening ceremonies of iconic buildings usually focuses on the constructor who implemented the whole project and not the architects and designers who dreamed up the whole thing nor the engineering work that implemented the project. The wide range of competencies is well exemplified by the new MOL Headquarters near the Danube, the transformation of the SZOT recreation facility (a large abandoned, unfinished building from the communist era) into a luxury condominium complex or the 3D building scanning of the Opera House – the first project of its kind in Hungary. Their portfolio covering 13 market segments – all branches of the construction industry – is unparalleled among Hungarian architectural and engineering design offices. They work on different private market projects: they have conventional real estate development projects (residential, retail buildings, and offices), industrial and logistics buildings, as well and tourism facilities. They have a long list of orders from public organisations: they design and manage cultural, education, sport, healthcare, and transportation projects. The company was founded at the outset of the political changes in 1989-90, in at the end of December 1989, remembers Attila Tóth, CEO of CÉH. At the time, most of the new businesses lived from day to day, as the businesses of self-employed people. For their company, this phase lasted until 1995. That was when they decided that they did not want to remain a business of self-employed people who create jobs, but wanted to take a long-term approach instead. They transformed the young office into a joint-stock company, setting up the organisational structure and the divisions. This was the time when they extended their architectural engineering services beyond design to include project management as well. A period rich in orders and challenges came, when they had many nice projects despite the economic austerity. They were awarded the 2002 Europa Nostra prize given for outstanding monument restorations in recognition of their repurposing of the Millenáris industrial monument complex near Széll Kálmán square in Budapest. Looking back on this period, the company manager also has fond memories of designing the Megyeri Bridge in Budapest, as bridge-building is considered to be at the very top of architecture. As he said, the creation of such a new structure is an opportunity that rarely comes up in an architect’s life.

CÉH developed an unmatched close partnership at that time with Westel, which later became T-Mobile, and which was then growing into a large corporation. CÉH did the architectural engineering work for all their facilities, the office buildings, shop network, base stations, and telephone exchanges.

Then came October 2008, and the domino effect started, as the global crisis hit, especially in the real estate development industry. The five-year crisis had its impact on CÉH as well: nearly half of the architectural and engineering design offices closed. They had weeks when orders worth HUF 500 million were cancelled, which caused serious losses. Attila Tóth believes that the crisis had a positive impact on the company, as they learnt a lot from it. Diversification, having a broad portfolio, and considerable reserves proved to be a good strategy. Industrial developments also helped to survive this tough period. A good example of this is the design project of the Kecskemét Mercedes Plant or the order from the Bridgestone tyre factory. They opened up towards foreign markets, primarily towards the Arabic countries and the former member states of the Soviet Union – especially in Azerbaijan, where they designed a 24-floor hospital in Baku. This is their reference for managing the 120 metres high new MOL Headquarters under construction near the Danube river in Budapest. In the opinion of Attila Tóth is that, while there is no tradition of high-rise construction in Hungary, selecting the right site can add to the development of Budapest.

Another important lesson they learnt from the crisis, in the view of the company manager, is that one must know the processes going on in the industry, the economy, and in politics, because this is the key to preparing for the future. He is proud of the fact that they did not have to lay off any of their staff. Efficiency and cohesion in the organisation improved a lot at the time, as employees and management were forged into a strong alliance. The company philosophy is an important element of this togetherness, though it falls far from the dry engineering mindset, CÉH believes in a style of management based on caring and trust. These fundamental principles must be adhered to not only when everything is going well, but also in hard times. Attila Tóth believes that a company must define its common values when the number of people sitting around the table is increasing and even the number of tables is increasing.

After the recession, the Hungarian construction industry regained some momentum in 2015. Then, after a short downturn, it has come to the point where it is now, that is, highly overloaded. In the opinion of the company manager, while the sector should normally expand at an annual pace of 10-15%, it has grown by almost 30% over the last year. The company plans to continue development all while ensuring that increased workload does not result in a deterioration of quality. This also means that they do not take on projects “at any cost”.

The company is looking for opportunities beyond Hungary’s borders as well: it is building strong partnerships primarily in Norway and Finland; but also has many German clients and works for Turkish, Arabic, and Indian clients as well. All this was supported by their decades of experience regarding the mindset and professional approach of the different countries. Attila Tóth thinks the Hungarian architectural and engineering culture is closest to that found in Germany, due to the great number of German partners, but the Anglo-American mindset is also becoming an increasingly serious requirement in Hungary as well. As he said, Hungary has an interesting mix, as it is a meeting point of different worlds, and requires familiarity with Russian, German, and Anglo-American standards. Projects designed for foreign sites are responsible for 10-20% of the company’s turnover, and they want to strengthen their international presence in the future. The impact of the company’s services is well illustrated by the fact that they can manage HUF 150-250 billion investments with their HUF 4-5 billion turnover per year.

Digitalisation, automation has been spreading in the everyday architectural and engineering work, and has been reshaping processes. Hence, CÉH has been a forerunner of BIM technology in Hungary. As they “sell ideas” that materialise into new systems, ground-breaking industrial solutions and creative ideas, studying the future is extraordinarily important for the company. When the company says that it is always looking ahead, it is not a mere empty phrase: they prepare five-year advisory forecasts on expected trends in the construction industry and development opportunities in their architectural and engineering activities so that they can better calibrate their own activities and make the most effective contribution to their clients’ profitability.