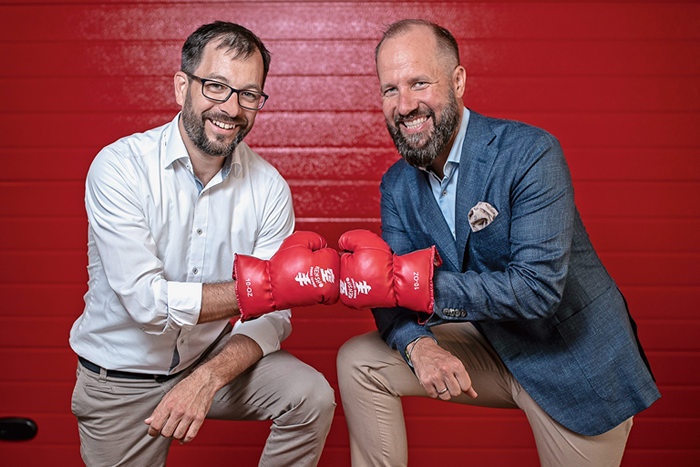 It’s not science fiction, though it sounds like it: concurrently with industrial processes, the workforce is also becoming digitalised all around the world. The founders of CodeCool believe that, as anybody can learn to read and write, you don’t have to be a math genius to become a programmer: the opportunity is there for former liberal arts students, police officers, pianists, but also career starters who want a “future-proof” career.

When we hear the word “programmer”, most of us picture a guy with a ponytail, glasses, and a checked shirt. CodeCool however seems to be breaking down this stereotype. This programming school, scarcely over three years old, has four European campuses and more than 300 alumni – one-third of whom are girls, and who are, in the opinion of József Boda, one of the founders and managing director of CodeCool, actually more motivated and more focused.

At their four locations (Budapest, Miskolc, Warsaw and Krakow), they currently have 450 coding students, a number which is growing continuously: the number of participants is expected to double over the next year, just like the number of their mentors. In a few years there will, foreseeably, be ten to twelve CodeCool Campuses, because this IT training scheme, which is different from conventional higher education methodologies, is now starting to spread throughout all of Europe, points out the other founder, Balázs Vinnai. The demand for such education in Hungary is well illustrated by the fact that there are more than ten times as many applicants as their are spots in CodeCool courses – meanwhile, media news reports claim that tens of thousands of IT jobs are vacant.

Good timing is a basic for the company founders who are familiar with ground-breaking projects: they discussed the details of the future business during a cycling trip in 2014. As they were cycling through a mountainous landscape and uphill at that exact moment, they limited their communication to what absolute minimum. By the end, József Boda “couldn’t say no, so he said yes” to the offer of Balázs Vinnai, i.e. to build up and manage the alternative, European-standard educational facility he had in mind. Their trust in each other is based on their long friendship: previously, they worked together in IND, selling this Miskolc-based company that had developed banking applications and which was one of the first successful Hungarian fintech exits. Getting to the summit, they took a great momentum and plunged into this greenfield business. Though their lack of educational background was an issue, they decided to look at the positive side of their situation. They saw it as an advantage that they started to build up the institution with the approach of newcomers, without any preconceptions. To start from scratch, they needed competent professionals, mentors who know how to build up a business, are familiar with IT, and can train the kind of IT specialists that they would want to work with, explained Balázs Vinnai. Today, anybody who goes to a CodeCool training centre (the one in Nagymező Street, Budapest, for instance) wouldn’t be able to tell that it is a school: there are no classrooms, desks, or blackboards, and it is difficult to tell teachers and students apart, as there is no hierarchy, and there is little difference in age. This is not the only thing that distinguishes the CodeCool methodology from conventional education. Conventional frontal education is virtually non-existent here, as students learn in teamwork or lifelike projects that simulate a real company environment.

They have a lot of career change stories, because CodeCool is for the broadest range of students: there are many stories of people from a great variety of walks of life who managed to find their path in coding. Even an average IT salary can ensure a pretty good standard of living in Budapest; hence, it is no rarity to see somebody come back to Hungary for the training and use their skills in the country. A good example of this is the married couple – a lawyer and a musician – who used to live in Austria: both found their own programming jobs in Hungary while also being able to continue their previous professions. The husband, the musician, put it very succinctly, saying that he can now focus on that part of music he really likes, and no longer has to play at weddings to earn a living. Another good example is the Miskolc police officer who works in Abu Dhabi, at one of the largest consultancy companies of the world, McKinsey, developing the mobile wallet of the First Abu Dhabi Bank. Many students come from a below-average background. The credit provided by the company to cover course costs is a great help at the outset: students only begin paying it back after they have found a job. Every newly graduated programmer has the chance to do that, as the school guarantees them their first job. Although CodeCool students must also go through the multi-round hiring procedure if they want to join a company, experience has shown that they do not face any difficulties. The certificate they get here is a very good reference and the programme also prepares them for the job interview.

As there are so many applicants for the course, they make selection a priority. Motivation is crucial, but it is also impossible to do the 12-month course and the 6-month internship without logic skills and some English as well. Viktor Bálint, the other managing director and investor of CodeCool, thinks that independence is also important, as the training model is based on self-learning, i.e. students study and practice from the given material at home for an entire week, then they spend another week together as a team, applying the knowledge they have acquired. Contrary to the system of conventional education, CodeCool continuously starts courses throughout the year. Thus, students learn at their own pace: one can, for instance, complete this 12-month course in 9 months, or slower learners can take 15 months to do so. The students develop an important network among themselves and with the teachers as well; this is one of the most important added-value aspects of the course, in the opinion of József Boda. They create a community, and a work culture that will be the basis for these good relationships; hence, they give their students a network, which is one of the most valuable “skills” in today’s world.

The businesses who offer students jobs represent the widest possible range of industries. In fact, any company digitalising its operations is considered to be a potential partner. They work together with more than 60 companies which come from a wide range of fields: from the automotive industry and banks to the FMCG sector, but they also cooperate with many conventional IT companies as well. 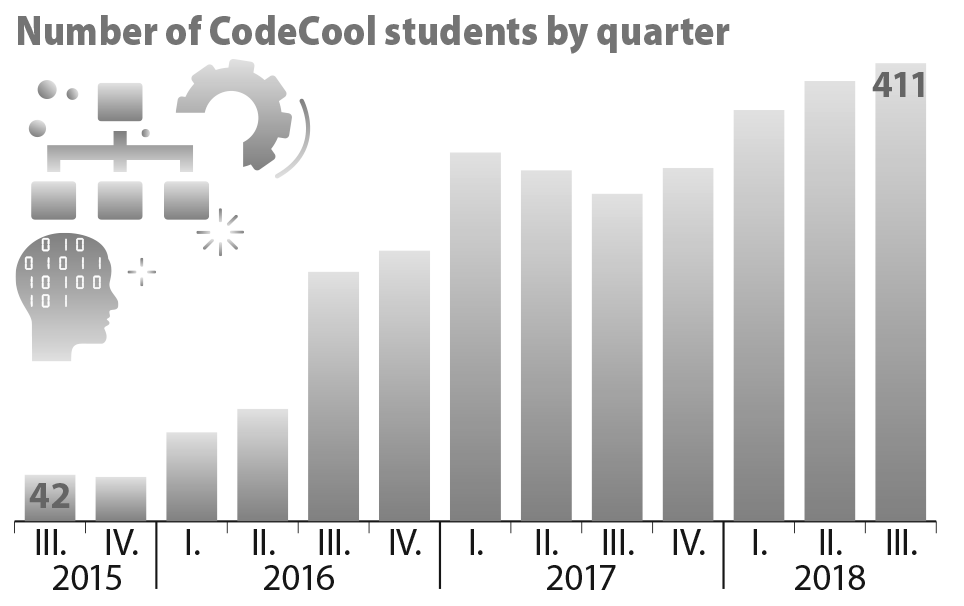 The unique aspect of their business model, and also its most difficult side, is the pre-financing of their courses. Contrarily to most of the companies, they turn money into intellectual knowledge – a process for which it is almost impossible to secure credit, as there are no financial products designed for this purpose. Their growth therefore depends on how they can solve their funding curve in the most effective way. They do not need to go far: in addition to the fact that Balázs Vinnai is a successful investor and is considered a celebrity among angel investors, the largest Hungarian bank is also interested in the company. Last year, PortfoLion Regional Private Capital Fund, a member of the OTP Group, invested EUR 2 million into CodeCool, supporting the international expansion of the school. They are lucky: national economies are booming, there is a great need for similar, alternative players on the education market, and this is a situation to be exploited, underlined Balázs Vinnai.

As CodeCool is a regional, CEE story, the current trend of nearshoring, i.e. moving large corporations towards locations nearer to their main markets, helps a lot. A reason for this is that offshoring is not an economical option under a certain business size due to the different time zones and the cultural differences. In addition, Southeast Asia and India have already lost their cost advantage (in terms of payroll cost primarily) to the CEE region. Their strategy is no less than becoming a factor in the decision-making process of large corporations when, for instance, they are looking for a location for their new tech centre. What they want to achieve is to make the availability of a CodeCool school in a town a major advantage when such decisions are made. They are doing exactly what the Hungarian economy needs in the increasingly fierce global competition: creating an important added value, “digitalising the non-digital workforce”.