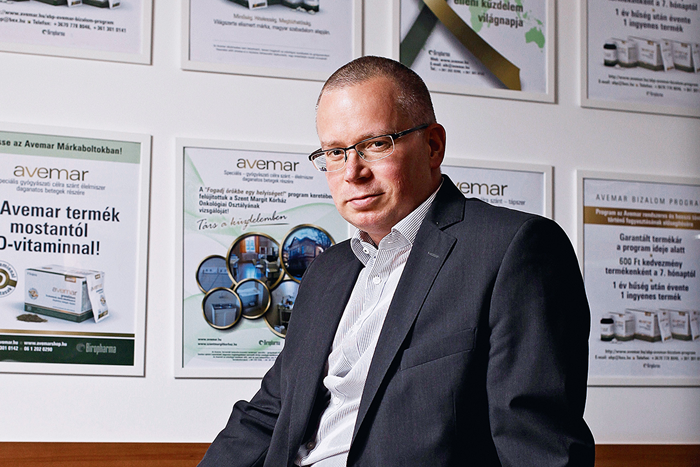 The manufacturer of Avemar is launching a new product on the market. The anti-enteritis agent – also made of wheat-germ extract – can expect almost limitless market opportunities.

The story of the creation of the company is like a fairy tale, says Mr. Attila Pechtol, general manager of Biopharma Kft. First, there was an inventor, Máté Hidvégi, who had the wherewithal to patent his idea and turn it into a mass-production business. All this was at the beginning of the 1990s. At the time, Máté Hidvégi started to research drugs that prevent the development of tumorous metastases: he is the one who developed Avemar, a fermented wheat-germ extract. The compound is a special medicinal foodstuff for cancer patients. They began mass producing it in 1998, in the company’s plant located in Kunfehértó (Hungary). The product’s formula has not changed ever since. The company is proud that it manufactures the patented invention of a Hungarian inventor in Hungary, with Hungarian workforce and from Hungarian raw materials. The Kunfehértó plant was one of the first in Hungary to prepare plant extracts. It was created in 1986 and the current owners took control of it after many transformations.

Máté Hidvégi always says that Avemar is his child, but that it already has its own life, and that he is just watching it grow. This mastermind was later bought out by two individuals, Viktor Nyíri and Ferenc Szabó, they are the managers of the company now. They still have an excellent relationship with the inventor.

Although Avemar is not the company’s only product, it still generates a HUF 600 billion share of the total annual turnover of HUF 700-800 billion. Due to its classification, the product cannot be advertised. It is, however, already a great advantage that the company can say that the product is designed for cancer patients. This statement is supported by many publications, and renowned international universities have also tested the product. “We were also surprised when we received positive feedback from Germany, the US, or Israel”, said Attila Pechtol.

Avemar is different from other special medicinal food preparations, because no other product has such a solid scientific background. The marketing strategy is based primarily on consumer trust in the product. They want to be present in the media, so that potential consumers get to know the product. Customers can also find a lot of information in the customer leaflet. The company has sold approximately 1.3 billion packs of the product and only very rarely – almost never – receives negative customer feedback.

Keeping production in Hungary is a priority for the Company. “We receive offers from time to time, but we insist on keeping production in Hungary”, explains Attila Pechtol. Trust in Avemar is showing up abroad as well, as almost half of their turnover comes from exports. One of their largest partners is South Korean, but they also ship to Australia and Canada. They have been present in Taiwan for years, and a major event of the last six months was that they could penetrate the Chinese market as well.

“It is easier to list the countries we don’t ship to than the ones where we have a presence”, says Attila Tabán, sales and marketing director of the company. For example, they do not ship to Africa and South America, but the product is especially popular in Asia.

Exporting the product is, similarly to marketing restrictions in Hungary, subject to a number of official authorisations. They do not only need to prove that the product is not harmful (as it is the case with foodstuffs), but also that it has a therapeutic effect. This takes time. In Malaysia, for instance, registration has been going on for thee years, while in Turkey, after four years of preparation, the product can now be launched on the market.

In addition to cancer, gastrointestinal complaints are also very common types of disease. Enteritis has become a lifestyle disease, both in Hungary and in the Western world. This name of the disease is an umbrella term for several health issues for which available treatments only treat the symptoms. In addition, it often happens that the disease behind the complaints of the patient is not recognised. Meanwhile, the medication for treating the symptoms is quite expensive. Biopharma has developed a compound that is also based on wheat germ, similarly to Avemar. (However, the technology used is completely different.) “Results of the animal tests showed that our product induced the same effect the best drugs did. It is possible that, in Hungary alone, hundreds of thousands of people could be suffering from the condition, meaning that it could be worth trying to break into this market with a new product”, says Attila Pechtol. After the animal tests were successful, they patented the product.

A clinical trial in Szeged, which is testing the product on humans, will end early next year. Half of the patients participating in the trial are getting a placebo, while the rest are taking the new product. Even the doctor does not know who is getting which. The aim of the test is to have the product placed into a category like that of Avemar’s.

“In fact, it is the opposite of the usual situation. Our aim is not to penetrate a niche with the optimum solution. We are dealing with a large market now; the only limit is determined by the funds we have to promote and distribute the product”, explained the general manager. International markets also offer a lot of opportunities. The company’s conventional strategy, however, (i.e. expansion by own resources) does not work for the new product. This is where the idea of raising capital from outside comes in.

When putting a product on the market, marketing and setting up the distributor network are the biggest jobs. This product is different from Avemar, so a new distributor network has to be set up, as it is not subject to the limits imposed on the previous product. “Cancer has be treated completely differently than inflammation. In case of the latter, you can actively contact people; while in case of cancer, clients have to come to us, public opinion and the press are much more sensitive, and regulations are much more complex. For Avemar, we have a webshop, we are present in pharmacies, and consumers can find the product on their own – the brand is very much trusted”, explains Attila Pechtol. The new product requires the same trust, but there is a much broader range of opportunities and methods.

The company is not afraid of production capacity problems, as the Kunfehértó plant can be further expanded. Trust is their trademark, and in their case, this is not mere lip service. The company gets this trust not only from patients, but from its employees as well.