Their knowledge is their strength - Transmoduls Kft. - Bet site 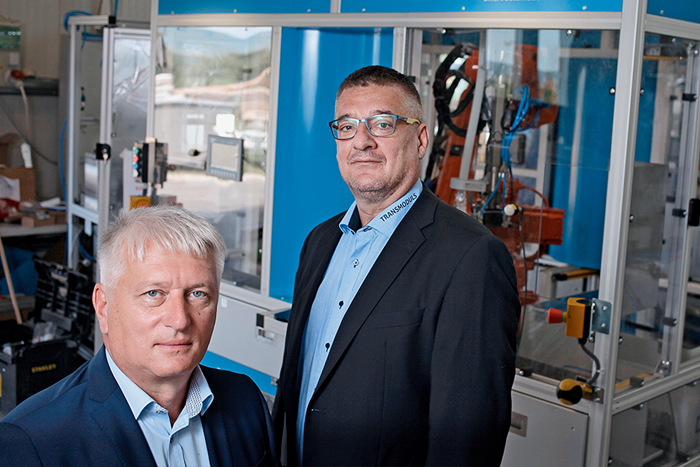 The Veszprém-based industrial automation and machine manufacturing company Transmoduls Kft. is growing rapidly. Their number of employees may even double within five years.

Transmoduls Kft. was founded in 1991 by Lajos Sári and Márton András Maár, along with two former colleagues. For a while, the owners worked on all work phases themselves. They produced safety coatings, foil packing machines, and transport and mounting tables in their garage workshop.

In the first years, growth was slow. One day, one of their multinational customers announced that the devices produced by Transmoduls had to be boxed up and re-installed in China. It was then that the owners realised that this was only the beginning, and a new world had arrived: one in which virtually all easily produced devices would be designed and produced in Asia.

This was when they decided to turn towards higher-level services. Their primary focus was the automotive industry. They started supplying major companies with highly automatised, complex, integrated machines, factory lines, as well as manufacturing, measurement, and control systems, using a combination of advanced industrial technologies.

During the financial crisis about ten years ago, developments in the sector worldwide had stopped, and companies were cancelling their contracts with Transmoduls Kft. one after the other. Still, the company stood its ground through these hard times. They did not want to give up their greatest asset – the accumulated know-how of their experts – and thus did not lay off any of their 36 employees at the time. This proved to be a good tactic: in 2011, they increased their turnover by HUF 500 million compared to the previous year. In addition, due to this dynamic expansion, they managed to open a new, 1,200 m2 manufacturing site in 2014.

“Our sector is very particular: when customers first approach us, we do not offer them ready-made, off-the-shelf solutions. Trust in business depends on whether they believe that we can make their ideas a reality. This is only possible due to our earlier achievements”, says Márton András Maár.

One indication of the pace of their development is that their first job worth EUR 1 million was a big deal a few years ago, but that today, as an important supplier of Industry 4.0 solutions, they have jobs worth EUR 2-3 million.

One of the keys to their success is how well their managers complement each other. Lajos Sári is an IT expert, while Márton András Maár is a mechanical engineer – two fields that have to work together in harmony, now more than ever. Due to the fourth industrial revolution, the importance of the IT team in the planning stage is increasing. Foreign multinational companies often expect that the machines supplied to them will be able to communicate with their internal IT networks. Thanks to their advanced IT solutions, Transmoduls has an easier job providing services: they can calibrate software remotely, even from the other side of the globe.

This is especially important as their presence beyond Hungary’s borders is increasing continuously. In recent years, the share of export in their entire business grew by 5% every year; last year, it accounted for more than a third of their revenue. They are members of the international cooperation Smart Automation Group, and they have their own independent company in Shenzhen, China, but have also exported to Mexico, France, the US, Spain, Romania, and Poland.

Their international role is constantly increasing, but they do not intend to take their know-how abroad. Their Veszprém site remains the company’s knowledge centre.

For major jobs, they usually take between a year and 18 months. According to their calculations, their capacity may double within five years, and the only limiting factor is the lack of qualified employees. One of the ways in which they are addressing this issue is through with dual training programmes. They do not only cooperate with universities: students of vocational schools may also apply for job experience at Transmoduls. They also consider that the value of free time has increased for Generation Z – thus they strive to reorganise their work processes so that young people get what they want at the company.

Although they have approximately 150 employees today, the company still has a family atmosphere, where employees feel free to share their problems with managers. And they try to find tasks that better match the competences of people who do not work out in a given job. This care is clearly showing results, as employee turnover is low, around 5%.

The question however is how to retain this family atmosphere while completely restructuring the company? Management started thinking about this four years ago. Since then, they have implemented a matrix organisation that is a better match for project-based operations. Before, the owners had handled every important decision, but in the new organisation created in 2014, there also is a place for a strong middle management segment.

At Transmoduls, investments are almost constant: they recently bought cutting-edge equipment for HUF 500-600 million, and they are also about to open a new R&D&I centre.

Regarding their future plans, they intend to decrease their dependence on the automotive industry (which currently accounts for 85% of their turnover), bringing it down to under 70%. It is also important to them to avoid taking on excessive debt, allowing a maximum of 40% loan ratio for financing developments.

They also plan to open a new manufacturing site in three or four years; they have already bought a 3000 m2 lot near their headquarters.