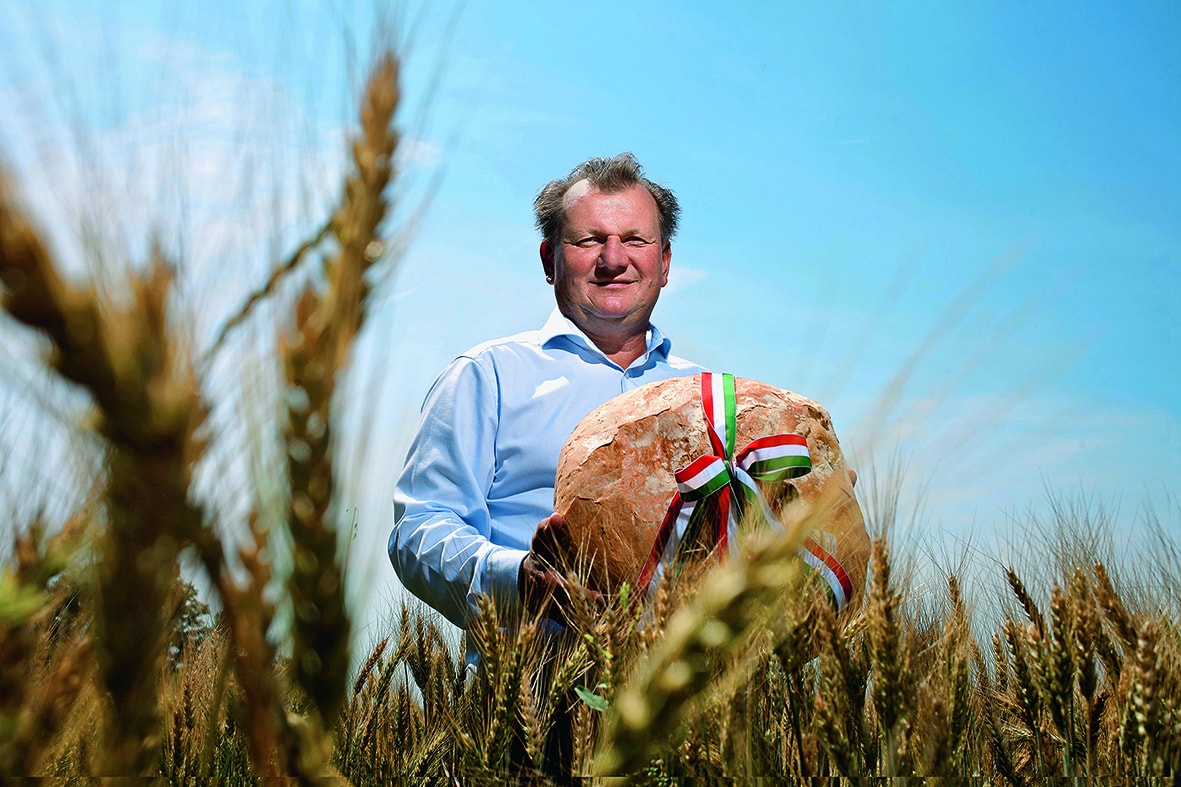 József Péter Tóth, Founder and Owner of the Lipóti Bakery

They’ve come a long way: the Lipóti Pékség (Lipóti Bakery), now a nationwide network, started out with their first bakery workshop at grandma’s back in Lipót, a village in northeastern Hungary.

Transylvanian potato bread, 3-kilo farmer’s bread, chocolate croissants—most people find even the names of these typical Lipóti products mouthwatering. József Péter Tóth, founder and owner of the Lipóti Bakery, knows that a business is good if everybody gets what they want from it—fresh high-quality products for the customers, and returning customers for the shop.

For nine years, Péter Tóth worked at the counter of a butcher shop and in a grocery shop, which was the work he had trained to do. In 1988, just before the regime change in Hungary, he went into business for himself, running three meat shops for three years at three different locations. He was, however, not completely satisfied and wanted to develop and end his commuting. He wanted to open a grocery and sell other products as well. Long story short, he wanted to offer something more for the customers. The idea to set up a small bakery popped into his mind during a trip to Budapest, and somehow he just couldn’t stop thinking about it. As Hungary was an economy of scarcity in the early 1990s, anyone who had ideas like this was bound to face a lot of challenges. Getting proper ovens and equipment was no easy task. Around that time, Tóth came across a periodical from the baking industry with an advert in it for expensive Swedish ovens. Fortunately, a family that emigrated to Sweden in 1956 was living in Lipót, a town which was and still is famous for its thermal spa, and who were able to inquire on his behalf about the original price of the equipment. They found out that the ovens were 30-40% cheaper if bought in Sweden. Tóth wasted no time in thinking about it, and quickly resolved to drive to the Göteborg area with a small trailer. Although he was not yet able to strike a deal because of the language gap, his trip took a very fortunate turn: the Swedish seller knew a Hungarian businessman in Norway, whom they called to interpret for them. When Mr Tóth took the phone and asked what he did, he told that he sold second-hand and new baking equipment. The very next morning, he was in Oslo, where he met the Norwegian-Hungarian businessman who had left his homeland in 1956. With his 30 years’ experience, he suggested that he should instead set up a small bakery and deliver his wares to the nearest village. He also shared a great deal of his expertise in baking. His best tip was to find the two best bakers in the area and learn the trade from them. Péter Tóth took his advice and set up the Lipóti Bakery in Lipót in 1992—in his own house, in a workshop set up in the grandmother’s room, as it happened. The tremendous amount energy he invested and his return to the roots of the trade paid off. The huge demand for their goods right from the beginning meant that they could overcome the first major challenge of turning a garage business into a true enterprise. They outgrew their current capacity every six months and added an extra 50, 60, 100 m2 to the “oven”, i.e. grandma’s room.

Their second turning point came in 2005 when they already had 60 to 70 people working for them. They realised that the expansion of multinational supermarket and hypermarket chains was forcing small shops out of business. Following the trends of the time, they also saw what it was like to be a supplier for these multinationals. “We can thank our competitors for all our improvements”, said the founder, sharing his wise conclusion. It was then that he decided to stop competing for the lowest prices and focus instead on quality and uniqueness. He took a deep breath and opened three bakery shops in Győr on 20 January 2006, a day which has since become a historic one for them. One could say that he had hit the jackpot: customers were queuing in front of his bakeries. After a mere three months, he saw that this would be their future. He drew up a master plan: to quickly open 20-25 bakery shops in the region before competitors could appear.

“A good entrepreneur does not have problems to face but tasks to solve”, says Péter Tóth. When he could not come to an agreement with the owner of a shop in a highly-frequented spot in Győr, instead of giving up, he offered them a deal they couldn’t refuse: a new franchise construction in which the owner runs the shop and Lipóti Bakery delivers the goods for a certain margin every day. This form of cooperation proved to work for the shop owner as well, and this success story became instantly popular. As potential franchise partners were soon beating a path to their door, they decided to go on expanding their franchise network and focus only on production. In one year, they opened 25 bakeries in the region, each one situated about 70 to 80 km from the others, meaning that they had a ribbon-cutting ceremony every other week. They could keep up this pace later too, and now there are 250 Lipóti bakeries all over the country. 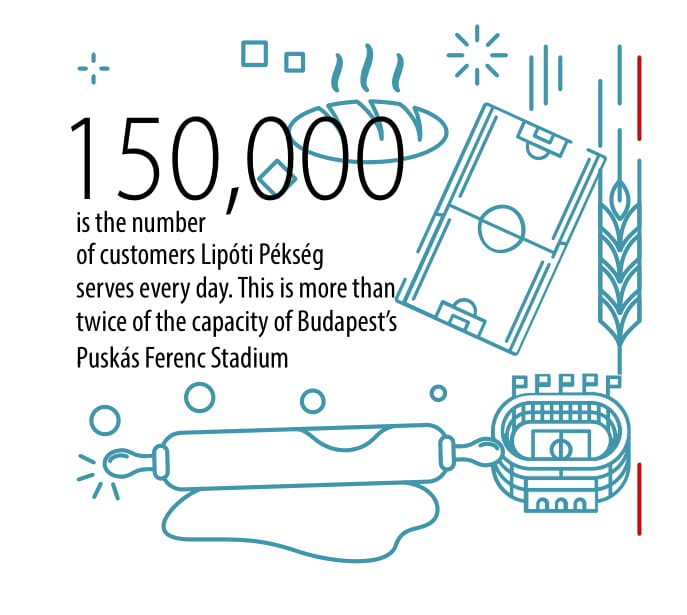 The next turn came in 2007 when they acquired a large-scale bakery in Tatabánya. This acquisition was a big move because it meant 150 new employees in addition to the 100 in their plant in Lipót—but they were happy to integrate the two. This was an important moment also because Tatabánya was closer to Budapest, where they now have 70 bakeries. When they outgrew their capacities again, the new opportunity came as if it on cue. They contracted a production plant in Kecskemét, giving them access to the Hungarian Plains region—meaning that they had covered 70-80% of the country in a couple of years. Their goal was not to get everywhere at all cost, but to make already running shops more efficient and to move them to better locations to increase the number of customers and the value of shopping. They could not rest on their laurels when they were satisfied with the results in this field. The next, and so far biggest, move in the Lipóti story was the introduction of automation.

They had been preparing for the workforce crisis, which, according to the founder, will be their toughest test ever. Although it affects everybody in almost the same way, bakeries are more exposed to this problem than the average, partly because of the demanding nature of their job and work shifts. This is why Lipóti decided that it was time use machines to increase efficiency in parallel with their current labour-intensive plants. They did not start small: they have invested HUF 10 billion in building a new modern plant in Hatvan where they will produce frozen and daily fresh products. They will achieve this with a technology that is competitive even by international standards and that can produce much higher quantities. The figures speak for themselves: in three or four years, they will have a new ultramodern plant that quadruples their current capacity. They have also developed a new sales channel to sell the output thus produced.

The current share of Lipóti Bakery in the market of daily fresh bakery products is 2.5%. The investment in Hatvan will allow them to increase that to 10%, and they will accomplish this not by targeting multinationals but smaller towns and villages. They have already started to work together with Hungarian-owned shops in small villages, and the results so far are promising. All three sons of the founder work in the family business. Tóth also has a young daughter still in school.

Péter Tóth is not “only” the founder and owner of Lipóti Bakery, but has now also served three terms as the mayor of Lipót. He thinks that a mayor and the municipal council should have three main goals, all of which he has accomplished in his town: providing jobs, high-quality education and sports opportunities. What he is personally most proud of is the Hungarian-English bilingual primary school that was established with the support of Lipóti Bakery eight years ago and has its first graduating class this year. Their sporting facilities are certainly top-notch as well: they have a football field with thermal-water ground heating and a sports centre. It is no wonder that several Hungarian and foreign football teams hold their training camps in Lipót for its quality infrastructure—and they do not need to go far for fresh bread and pastries either.