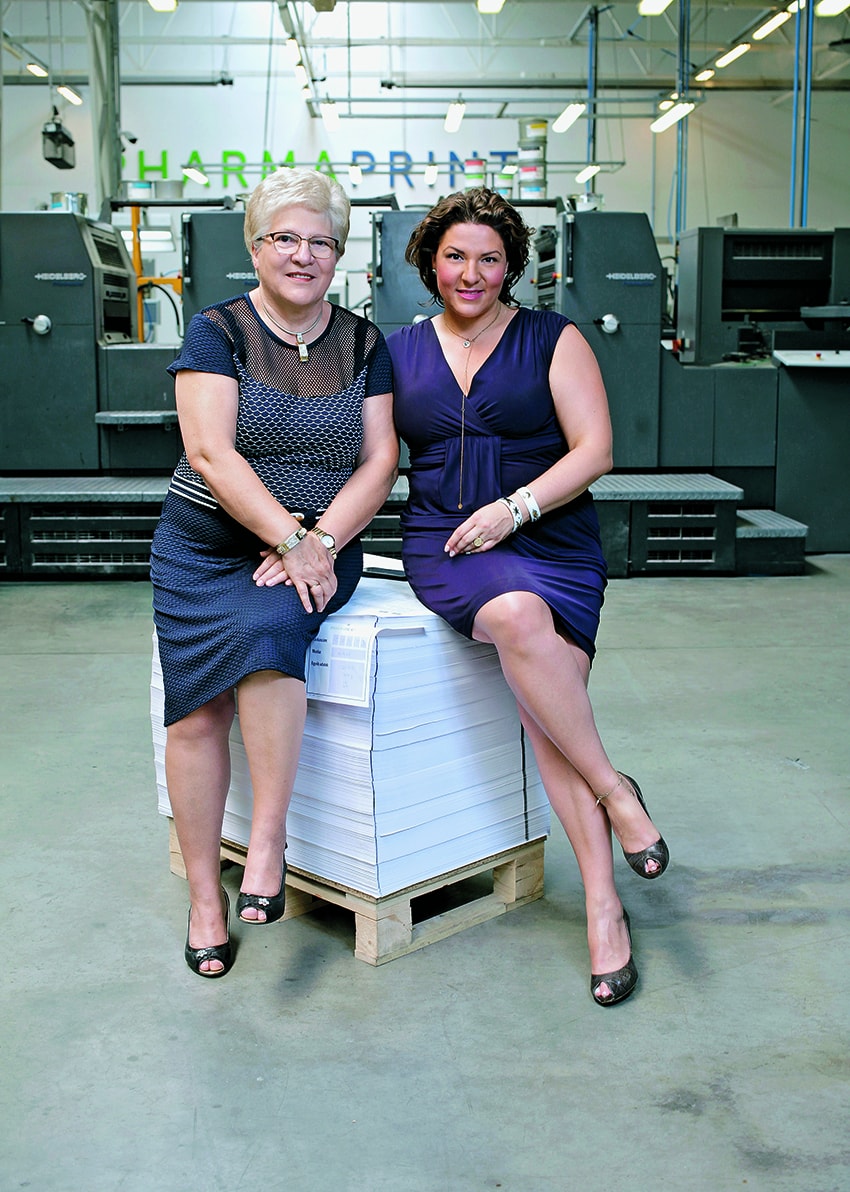 This family business started as a small, agile printing house, but nowadays it only prints patient information leaflets for major international pharmaceutical companies. This medium-sized company in Debrecen, a city in eastern Hungary, has over HUF 1 billion in revenues, over 50 employees, and exports its know-how and its precision zero-defect technology (unique at a global level) to Germany and Switzerland, among others. This translates to an extraordinary advantage for Hungarian and international pharmaceutical companies.

Before 1989, Dr János Karancsi and his wife, Erika Karancsi, were merely two ordinary citizens of Debrecen. Today, they have a successful medium-sized enterprise. Their daughter, Dr Lilla Karancsi, is now responsible for the operating aspects of business development and sales. She says her parents are incredibly hard-working, and although they have passed the age of retirement, continue to play an active part in the life of this special printing house that employs 65 permanent and dozens of temporary employees. The company has had revenues over HUF 1 billion and decent annual profits for quite some years.

The company’s history is exciting partly because the parents were not always entrepreneurs. The father had law degree, while the mother had studied chemistry. When they were young, neither of them would have thought that they would once have their own printing business.

The mother, Erika, was the procurement head at the Biogal Pharmaceutical Company, the father was the legal and human resources director of the Hajdúsági Építőipari Vállalat (Hajdúság Construction Company). Already before the regime change in Hungary in 1989-1990, Erika often faced the great challenge of finding a printing house that could provide quick, efficient and quality printing services for the patient information leaflets—an indispensable element of medicine packaging—needed by the pharmaceutical plant in Debrecen. “Just as today, printing houses tried to avoid this kind of job. It’s picky and complicated work that requires a highly meticulous approach. Also, it doesn’t produce a result that’s showy and impressive like a nice book or a fancy colourful company catalogue or brochure”, says Lilla Karancsi as she recalls their early years.

It came in handy in the beginning that the father, working as a manager at a construction company, had been given the task of managing the company’s hardly used printing press.

Thus, when the regime change came, Erika secured the client, Biogal, and János brought some practical printing and lithographic experience to their business, which they ran as a second job for quite some time. Then, in 1995, they established Ónix Nyomda Kft., the predecessor of today’s medium-sized enterprise, Pharma Print Kft.

In the first few years of course they took on all kinds of jobs, so as to utilise the capacities of the expensive printing machines as much as possible. At the same time, every year pharmaceutical companies made up an ever greater share of their clientele, because hardly anybody wanted to do this “highly meticulous work”. In addition, patient information leaflets are so-called secondary packaging materials that do not come in contact with pharmaceutical pills, liquids or other materials directly, but are still governed by the strictest of regulations. For example, even the raw materials used to make them have to be regularly tested for bacterial contamination. The paper Pharma Print works with is so contamination-free that it could even be used in operating theatres or other clean rooms, says Lilla Karancsi.

In the 1990s, other big companies, such as the Hajdúsági Iparművek (Hajdúság Industrial Works), Curver, or—a few years later—General Electric, also had strict requirements. This small but quickly growing company was, therefore, not only forced to ensure comprehensive compliance or transparency, but was also required to constantly deliver uncompromising quality.

Later, at the time of the “big printing purge”, when hundreds of small family-run businesses went bankrupt, outstanding quality was a huge advantage for Pharma Print. Lilla Karancsi is still very proud of their zero-defect operations.

By 2008, the pharmaceutical industry already accounted for more than half of their revenues, and it was also this sector that helped Pharma Print, with revenues of nearly HUF 1 billion, weather the economic crisis.

The big turning point, when their growth really began to accelerate, came in 2010-2011. At this time, they launched a development project worth nearly EUR 1 million, partly from subsidies, buying their own site in the Debrecen Innovation Park. More importantly, they put new production lines, worth nearly HUF 400 million, into operation and thus increased their capacity considerably.

This, however, also meant greater responsibilities, because capacities do not automatically mean revenues and profits—those still had to be earned. Despite the subsidies, they needed clients. Even cutting-edge printing machines are mere idling hardware without sales. Lilla thus moved to Berlin for awhile to scout out some opportunities.

Her philosophy is that if you have to go where the money is if you want to find some. This why she decided to take on the impossible on her own: according to conventional wisdom in the industry, the German pharmaceutical market is an impenetrable fortress. But Lilla is not the type who gives up easily. She went to professional events and conferences, and in a mere two months, got the chance to present the Karancsi family business—as a the only woman among conservative professional German men. Slowly but surely, Pharma Print was admitted into the trade. Nevertheless, truly valuable accomplishments take time, and it was only six years after this presentation that they were able to deliver the first major order, proving that there were some grounds to the myth of impermeability after all.

Interestingly, it was a Greek pharmaceutical company that first placed an order with them while they were besieging the German market. Their cooperation with this company gave them a sound experience in supplying international customers and excellent references; factors which accelerated their sales in the German and Swiss markets they wanted to penetrate.

The success of their strategy to open towards international markets is demonstrated by the fact that nearly 50% of their revenues are generated by international transactions. They deliver to Germany, Romania, Russia, Greece, Slovakia and Switzerland. In addition, their clientele includes Aenova, GSK, Richter Gedeon, Sanofi, Mylan, Egis, HBM Pharma, Genepharm, Rafarm and Pharmathen.

Meanwhile, they of course continued to develop. This year, they are increasing their capacities again with another investment of nearly EUR 1 million. This will theoretically enable them to print twice as much as their current volume of 250 to 300 million patient information leaflets.

Even more interestingly, Lilla, aka LLL, has meanwhile created her own luxury jewellery brand under the name PorzeLLLan: Fine Porcelain Jewellery (www.porzeLLLan.com). Her creations are 21st century virtuosic interpretations of Hungarian high culture and the traditionally renowned Hungarian porcelain crafts.

Lilla and her parents are also committed to being socially responsible. As responsible entrepreneurs and prominent members of the civic community of Debrecen, János and Erika are one of the main donors to the Debrecen Baptist Congregation. Erika’s generosity is legendary: she is the head of the committee for social affairs of the Baptist Congregation as well as a beloved singer in its choir. János is a true host, who dishes up his own homemade goulash and stew for congregation events. His personal record is 500 well-fed guests. The leaders of Debrecen have awarded János the prestigious “Patron of Debrecen” title for his philanthropic activities in the arts world.

Following in her parents’ footsteps, Lilla is happy to share her international experience. She is a founding member and enthusiastic sponsor of the TEDx Nagyerdő Conference, which is celebrating its seventh anniversary this year.