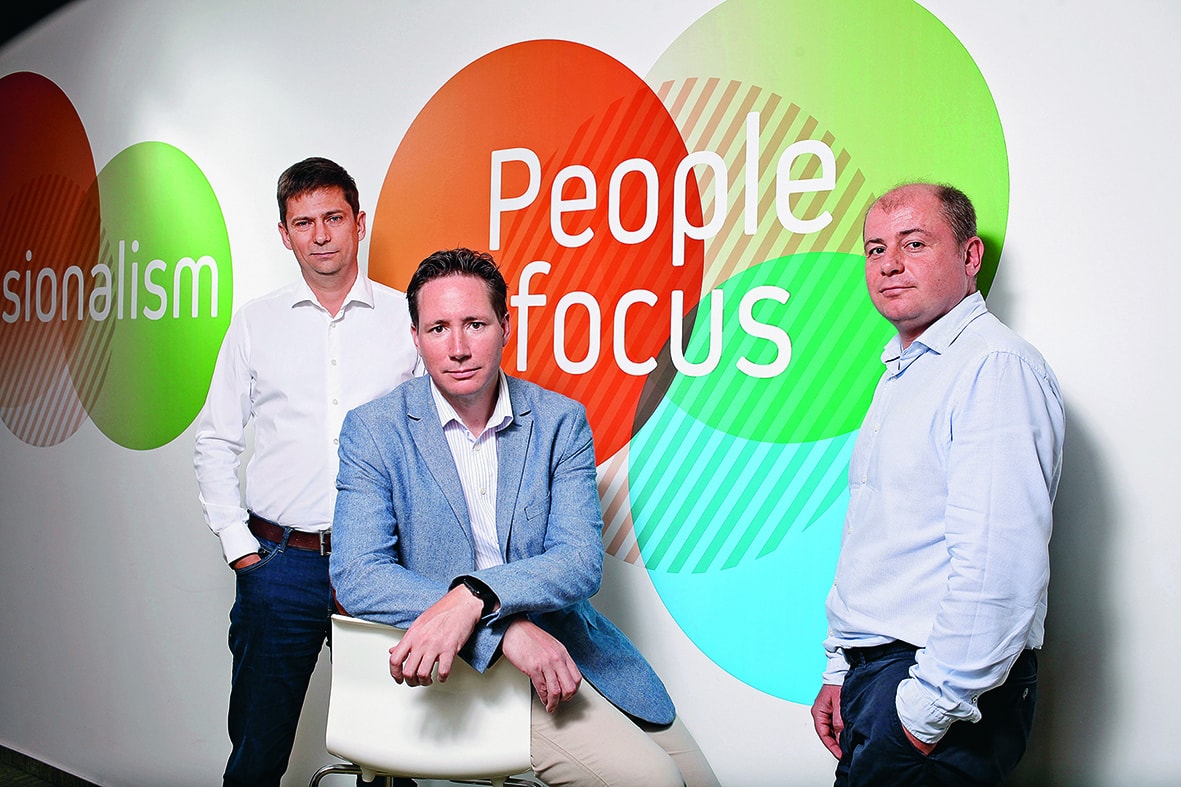 What started out as two small IT consultancy and software-development companies has gradually developed organically, step by step, into a group generating around HUF 2 billion in revenues and employing over 170 professionals.

Zoltán Beke spent the first ten years of his career as an IT consultant. Around 2002 when he was in his early 30s, he had what he calls an “early midlife crisis”. In other words: he got tired of making plans that only ended up gathering dust. He wanted to actually implement the ideas and proposals that others ordered from him. This is the story that led to the establishment of Mortoff in 2004, a company that started taking on complex consulting and project-management projects, initially with a small team. Almost at the same time, András Szőnyi and Gergely Berecki, Zoltán’s future business partners, started up their entreprise for similar reasons. András had been an IT consultant at Ernst & Young between 1999 and 2004, and he first met Zoltán on account of a Pannon-GSM order. They later worked on several projects together. As the two companies complemented one another perfectly, they decided that Mortoff, which had 40 employees at the time, András’ company, I-DEAL Kft., would join forces and continue as a stronger group. This was a huge expansion: not just in physical terms but also in the eyes of their major corporate clients. Indeed, by joining forces, they were able to hit the magic number of HUF 1 billion in revenues in the early 2010s.

They got their first major order from Pannon-GSM, Telenor’s predecessor. At the time, a huge American accounting scandal, the Enron scandal, had led to the imposition of strict rules on listed companies, including the then owner of Pannon-GSM. Zoltán Beke and his team then implemented the appropriate processes and set up software support solutions that could handle these complex requirements well.

The company was taking on more and more IT projects, but its big leap forward came in 2007, when a major German industrial company was looking for a Hungarian partner, and happened upon the founders of Mortoff. The German client-to-be wanted to visit their team, which at the time numbered only four permanent employees working in a small office in a rundown office building—when they were not teleworking, which was more often the case. They just could not welcome the delegates of Trumpf, a medium-sized company in Germany but a big company in Hungary, in a cubbyhole in a shabby office building. So, they rented the house of a friend (it happened to be available) in the 11th District of Budapest for one day, deciding that if they got the deal, they would stay. They rushed to IKEA and bought a conference table, a fridge, some fancier office furniture, and prepared this “Potemkin” office in half a day to welcome the German client. When they were showing them the office, they of course told them that they were in the middle of moving there. Luckily, they got the job and did simple project testing in the beginning before getting much more complex projects. So, they moved eventually really did move there. Nowadays, Mortoff is responsible for all the software-testing processes of this German industrial company as a business process outsourcing service, and they also support them in tackling the challenges of digitalisation through software development.

The post-2008 financial crisis period was hard for many companies, but only offered further opportunities to this dynamically developing IT company. It was at that time that big companies started to work with small and flexible IT companies offering good value for money, which is how Mortoff was also able to secure prestigious clients like General Electric. András Szőnyi and his colleagues were especially strong in the insurance industry, which is where they grew. Thus, the unified Mortoff Group had what Zoltán Beke always wanted to offer: meeting all of a client’s needs in an IT project, from start to finish.

The next big leap forward came with the aforementioned GE project over three years and with a budget of over HUF 100 million. Because of the intensification of outsourcing among big companies, this project and other similar ones ensured that they could profit from the crisis instead of struggling. It was around that time that the implementation and testing of customer relations management (CRM) systems became one of Mortoff’s featured services, and that they decided to start working in another field: business intelligence (BI). This strategy was supported through the acquisition, in 2014, of Processorg BI Kft., a small company with a dozen employees and specialising in this area. This acquisition also demonstrated that the group, carefully and deliberately built up since its beginnings, was able to welcome a new member of the group that perfectly fit into the strategy of this medium-sized IT company. 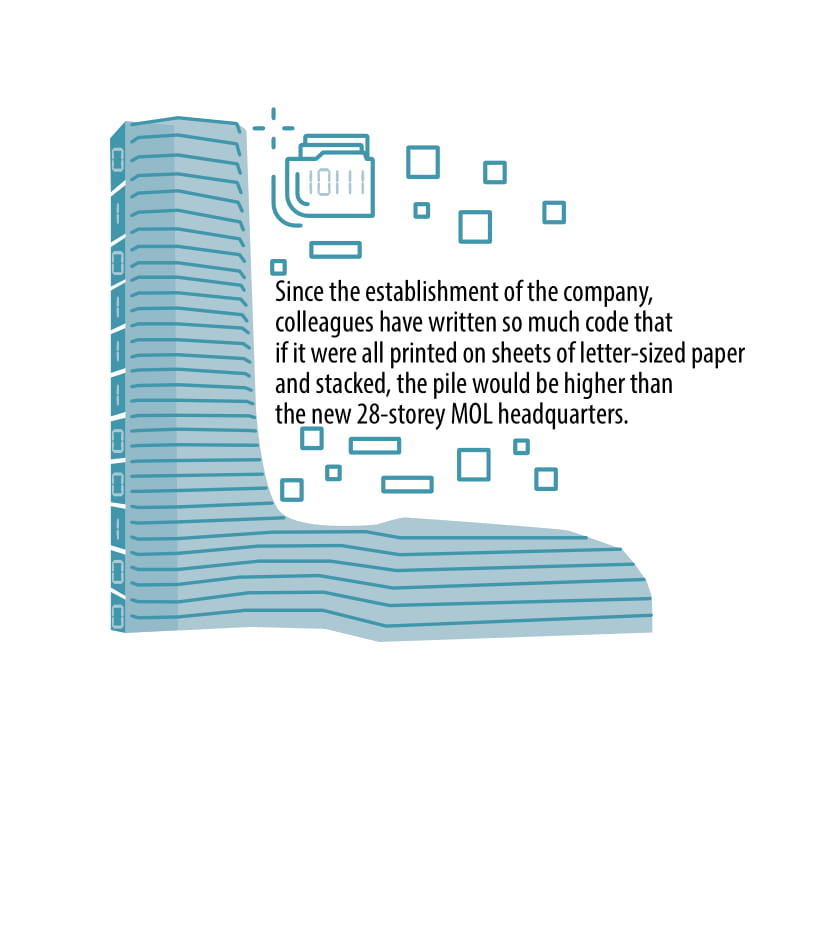 By then, their headcount was already far above 100. BI has witnessed the emergence of Big Data, which means the rapid processing of vast data quantities. This is significant primarily for major financial, telecommunications, and industrial companies—clients of the Mortoff Group. A few years ago, they prepared and helped implement the Big Data strategy of a major Hungarian telecommunications company. In recent years, they passed another milestone: Zoltán Beke realised four or five years ago that running a medium-sized company with over 100 employees was getting to be too much for him alone, or even in conjunction with his partner András Szőnyi. Accordingly, he started to look around and came across the former CEP of AAM Tanácsadó Zrt., Sándor Dobozi, who gained his leadership experience at an IT consulting and development group with peak revenues of HUF 4.5 billion, over 200 employees and operating in ten countries. Sándor has recently taken over the operational management from the two owners. The latter are still active in the company’s management and strategy, but with a headcount of 170, the company needed this move.

This was so partly because they had opened an office in Sfântu Gheorghe, Romania in 2016 and another in Veszprém in 2017, and partly also because they had invested considerable amounts and a lot of time in several spin-off projects, the most remarkable being their Industry 4.0 solution: Reach Solutions. This system is intended to digitalise a conventional factory down to the last nuts and bolts if necessary—improving its operating efficiency, quality, and cost effectiveness by obtaining data from machines and sensors. This is obviously yet to come—for the time being, the aforementioned more conventional projects (software and data-warehouse development, data visualisation, Big Data solution, software testing and IT consulting) generate most of their profits. In 2019, they plan to increase their revenue above HUF 2 billion again, and their 2021 target is near HUF 3 billion. To expand, they must by all means strengthen their international presence. Their primary target markets are German-speaking countries, Nordic countries and the Benelux, but they have already been contacted from the US as well.

Coming up with a new and innovative IT solution for their clients is an important element in their strategy. Correspondingly, they place a strong emphasis on various fields of automation and robotisation—more specifically, process automation with Robotic Process Automation (RPA) solutions and software-testing automation, for which they have developed a proprietary product. Needless to say, the company is active in social responsibility as well. For over a decade, they have been supporting the Bátor Tábor summer camp project that offers life-changing experiences, strength, tools for life and healing for seriously ill children and their families.

They began backing this initiative years ago, even when it was virtually unknown. They also sponsor an orphanage near Budapest, while Zoltán Beke and his fellow managers regularly take part in charity auctions.