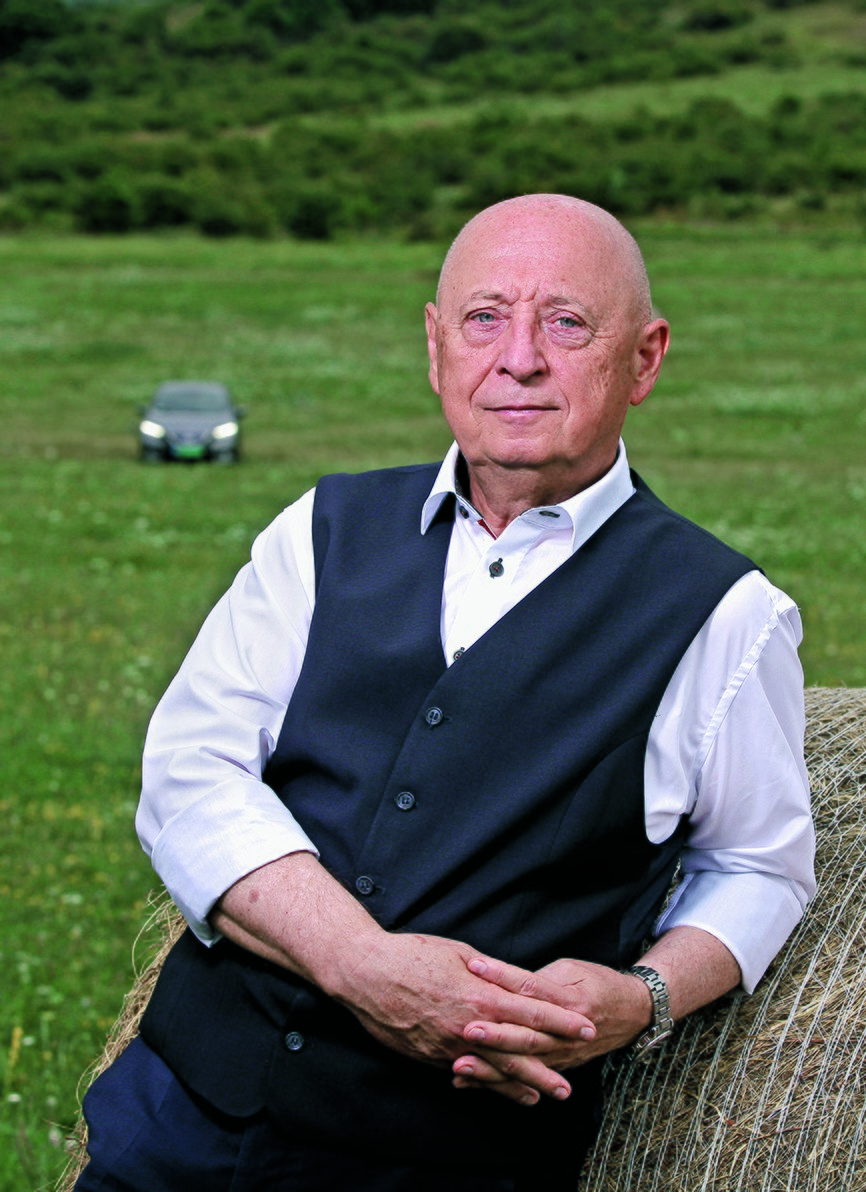 Gábor Gablini, who started out as an apprentice car mechanic, is now the CEO of a company group that sells the car models of six manufacturers.

In the early 1970s, Gábor Gablini worked as a surveyor at Uvaterv, Hungary’s state company in charge of transport infrastructure. Expulsed from college as the result of a disagreement, he used this opportunity to make his dreams come true. A car enthusiast since childhood, he decided to make his passion his profession. The first car he had the chance to sit in was a Soviet-made Pobeda with squashy seats, back in 1957. He got permission from the No. 4 ART garage to learn how to repair cars, and he was ready to start at the bottom and work his way up. He learnt to assemble and disassemble engines, running gears, and gearboxes of most of the models popular at the time in the biggest overhaul garage in Hungary of that era.

“Nowadays, there’s nowhere you could learn the little tricks they taught me there. Things like bearing scraping or piston-ring fitting. I really enjoyed it. I was just absorbing all the knowledge and promotions came one after another as I continued to learn the trade. Two years later, I was reassigned to the service centre garage. I was sent to training courses abroad where I had a chance to visit the Skoda, Wartburg, and even the Volvo headquarters. The Swedish brand came to Hungary in the mid-1980s and was sold for foreign currency. In 1983, I was the team leader of the main-piece workshop of Spirál, the biggest garage complex of the Central European region”, explains Gábor Gablini, owner and chief executive officer of Gablini Vagyonkezelő Zrt. He repaired many engines, but also made sports engines and self-locking differentials with his colleagues. News of his skills soon spread, and he started taking jobs at home as well. After a few years, his clientele had become so big that he decided to build his own garage. He and his father-in-law transformed a chicken coop into his first garage—unheated, but with a service pit. In 1988, they built a family house aligning with the now-heated garage on the bottom floor. This garage had a service pit with lighting and exhaust gas extraction, a unique amenity at the time. It was also at this time that he became an independent entrepreneur with the principle that he would not accept tips.

“There were not that many other small garages as modern as mine. So, once the time of Eastern Bloc cars was over, Peugeot immediately gave us a service and dealership licence. I started working with two colleagues. The demand for Peugeot cars soared, and we worked on scores of imported Peugeot cars from all over the country, because we could repair even the rarest defects. Our clientele grew so much that by 1991, clients wanted to buy their new cars from me. I wasn’t focusing on sales at the time. Those who really insisted on buying from us could do so from a colleague of mine who worked in a garage rented from my neighbour. That was the extent of our sales activities in the beginning”, Gablini added.

He bought the neighbouring lot in 1993, where he set up a tent that could show six cars. By 1995, he had sold more cars there than all the regular Peugeot dealerships in Hungary. However, the director of the French automaker gave him an ultimatum: he had one year to build a decent dealership, or he would not be allowed to deal in Peugeot vehicles anymore. As this coincided with the austerity package of Finance Minister Bokros, it was rather difficult to secure financing. They got it eventually, but at 33% interest. They opened their first car dealership on the site of the former socialist electric equipment repair service, GELKA, with 23 employees. The regular HUF devaluations announced in advance meant a higher price margin on the imported cars, so they could repay the loan in 30 months. By then, they had also outgrown the site, and started to build their state-of-the-art Peugeot Gablini M3 dealership in 1999. Designed with a so-called Blue Box layout, it is located in the outskirts of Budapest.

“The closed-box layout makes the customer check out almost all the cars displayed in the dealership before he or she could deal with what he or she has come for originally. I proposed to let in more natural light into the building than originally planned, and that we could also build a gallery. The building was then finished by 2001. This project made a name for us in the history of the Peugeot brand, as it was their first new-concept dealership. Incidentally, the changes we proposed were so much appreciated that our model was copied by subsequent dealerships all over the world”, added Gablini.

Hungarian car dealerships grew dynamically over the subsequent years. Although 2004 saw the introduction of 0% down-payment foreign currency loans, the Gablini Group did, however, not apply such sales tactics. This meant a lot of criticism for the company and the loss of sales. However, it also meant an increase of customer trust and that the 2008 financial crisis had less of an impact on them. Around that same time, however, Peugeots began experiencing some quality problems. This compelled Gábor Gablini to look to another automotive manufacturer. As Nissan was looking for a partner who was experienced in selling big quantities, they became a multi-brand dealership. Since 2006, the year they included the Nissan brand in their portfolio, the Group has been led by a professional management team that includes several younger members of the family. It is also these younger family members who will eventually take over the position of the current owner and chief executive officer.

In 2008, they also bought a former Nissan dealership, Summit. In the meantime, the Gablini Group has begun started to deal in Kia and then Hyundai models as well. In 2009, they obtained a license to import Nissan’s premium brand, Infiniti. In the summer of the same year, they also announced that the Gablini Group would import Aston Martin cars to Hungary and the West Balkan countries as of 2020. Gablini believes in encouraging his colleagues at the Group (which currently has 200 employees) to continue learning and in offering them career advancement opportunities.

“The Hungarian market volume of new cars (without re-exporting, i.e., cars actually registered and used in Hungary) is about 140,000, while 160,000 used cars are imported. If vehicles were taxed based on emission, there would be less old (older than 15 or 20 years) and highly polluting vehicles being imported. This kind of tax would also expand the new-car market by 5-10%”, said Gábor Gablini. He also thinks that the normal share of used-car imports would be between 20 and 25%, compared to the new-car market.

He thinks that new-car dealerships have another 20-25 years, but no more. Online sales and electric cars are bringing about considerable change. Given the low maintenance requirements of electric cars, he thinks that the current garage network will not survive in the age of electric cars. It is, however, still true that their extraordinary acceleration owing to the promptly available full torque means that 90% of cars end up with dents, which will secure work for body ironers and polishers. “The automobile industry is changing at an incredible rate. We are also watching new technologies and are pioneers in electric car sales. In fact, we’ve already sold 1,000 Nissan Leafs already. In the future there will be fewer but bigger dealerships, which forces us to increase our efficiency. It is important that manufacturers need us in our role as dealerships. We can achieve this if our clients and partners are satisfied with us”, said Gablini.

Their success is not only measured in figures but also in the extent to which they are able to contribute to important societal issues. Due to the nature of their operations, the company focuses a great deal on environmental awareness, but also makes it a priority to help sick children. They work together with the Beteg Gyerekek Alapítvány (Foundation for Sick Children) and have recently donated life-saving equipment to Budapest’s Heim Pál Paediatric Hospital.