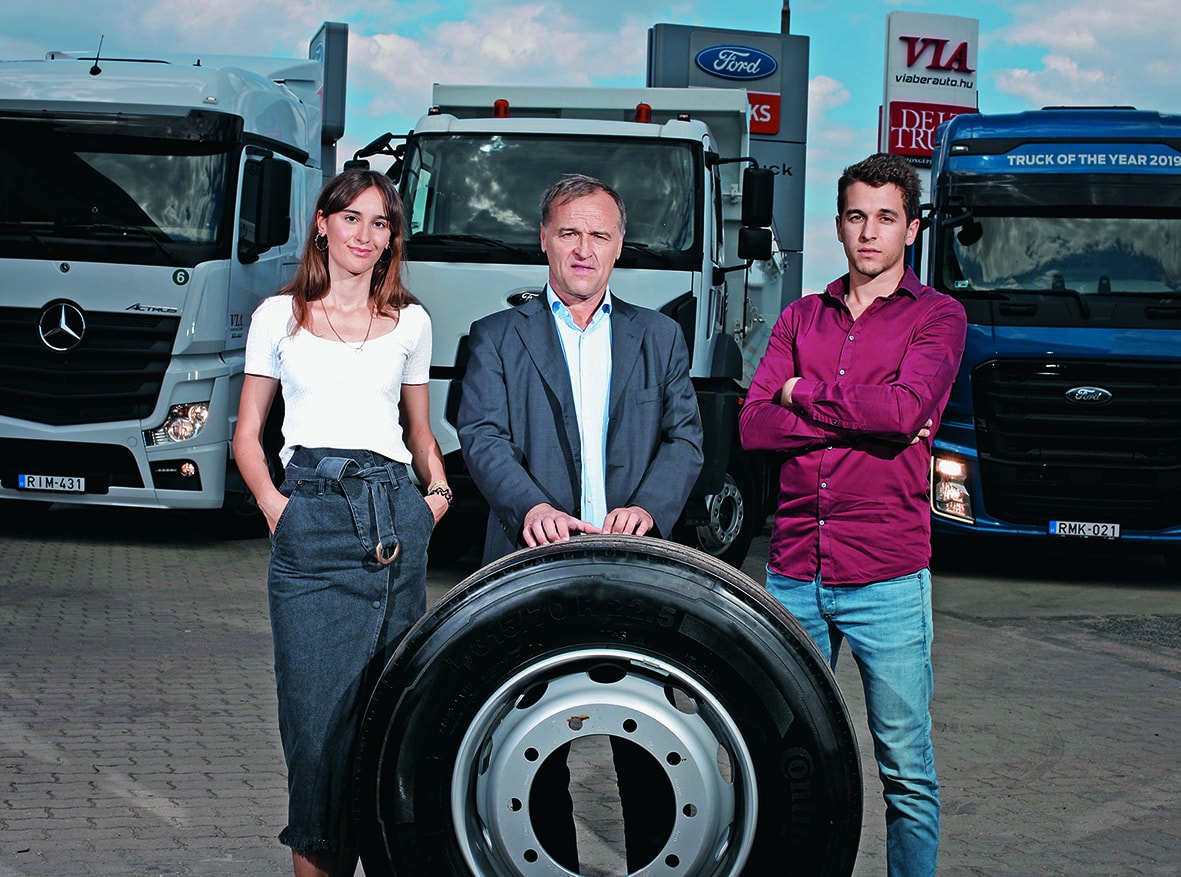 The dynamic duo of Delta-Truck Kft. and Via Bérautó Kft. has achieved a lot through their systematic approach by taking the chances offered by the market.

Delta-Truck Kft. and Via Bérautó Kft. have started expanding regionally, said Péter Stefkó, the leader of the group established by these two companies. These two deal in, sell, lease, and repair small, medium, and large cargo vehicles at their sites in Budapest, Szigetszentmiklós (a town south of Budapest), and Bratislava—meaning that the leading company of this industry has already taken the first step to entering the markets of the surrounding countries. The company plans to continue expanding into the Czech Republic, Austria, Serbia, and Italy. They have several models in mind. Depending on the specific market, acquisition, company establishment or setting up a franchise system (which the management finds most attractive) are their options. The management knows, of course, that cross-border expansion requires a solid IT and financial background. It thus comes as no surprise that they have started to implement the SAP integrated business software and that they will target the Budapest Stock Exchange in the not too distant future. They are so committed to the latter project that they have joined the ELITE Programme of the Budapest Stock Exchange, where Boldizsár, Péter Stefkó’s son, and another company employee soon will have the chance to start preparing in London and Budapest for this big step. Boldizsár—quite unexpectedly—got his employment contract as a “present” from Péter for his 22nd birthday almost a year ago and has been systematically trying himself out in the various units of the company to learn about their activities ever since. Currently, he is working in sales.

When Péter Stefkó, a fresh graduate from the College of Telecommunications in Győr, established Delta-Truck Kft. with a couple of friends to import and repair second-hand trucks in 1991, he never would have dreamed that, under his leadership, the group would simply outgrow the Hungarian market 28 years later. The company was always flexible in adapting to market opportunities right from the start: in 1992, for example, Delta-Truck became the exclusive dealership of Renault trucks in Hungary. Business was off to a roaring start, and the company’s momentum kept right on going even when Volvo bought the trucks department of Renault and ended the cooperation with all European dealerships, including Delta, a few years later. The next twist came in 1995, again from France, because they introduced the common business model in Western Europe, i.e. renting trucks instead of leasing them to transport entrepreneurs, through Via Bérautó Kft., a joint venture established with a French company. Delta-Truck bought out their French partner four years later, and Via Bérautó has belonged to the Group completely ever since.

The two companies divide the tasks between themselves as follows. Delta-Truck, which is in the majority ownership of Péter Stefkó, does the sales and servicing, while Via Bérautó, as his name implies (Bérautó means rented car in Hungarian), rents the vehicles. Nowadays, they sell more than 1,000 new and second-hand vehicles each year, and their 1,500 rented cargo vehicles drive on the roads of Hungary and Europe. Boldizsár Stefkó agrees with his father and also says that the future is about renting. This is also implied by the structure of their revenues and profits. In 2018, renting generated between 50% and 60% of the group’s HUF 550 million profits after taxes, while the majority of their HUF 18 billion revenues per year are generated by sales. Péter Stefkó says that renting is much more flexible than leasing. Vehicle-related paperwork is a burden for everybody, from bakers to construction contractors. And the burden gets heavier as the fleet grows. Via Bérautó provides a comprehensive service package with the rented vehicles (insurance, taxes, replacement of winter and summer tyres, repair, maintenance, consumables replacement, replacement vehicles). Clients commit themselves to Via Bérautó predominantly for a long term; however short term rentals, even for a single day, is also an option.

The group owner recalls how good it was during the 2008 financial crisis that they had already had between 250 and 300 cars for rent. Their industry was hit very hard in the recession, as entrepreneurs did not dare to lease vehicles and even returned previously taken leased cars to the lessors. Meanwhile, they had no problem with renting vehicles for shorter terms, sure that nothing could go wrong with that. Renting ensured their being one of the two survivors among the twenty competitors in the industry, although their over HUF 10 billion turnover dropped to HUF 3.5 billion to 2009. As soon as they climbed out of their slump, the CHF/HUF exchange rate skyrocketed. The company had loans in Swiss franks for 120 of its trucks—therefore, they started to manage loan contracts manually and, when necessary, sold a car or two immediately. It took them three years until they were really out of the woods, but it was nice challenge, says Péter Stefkó. However, they never could have achieved any of this without renting.

The next big challenge is recruiting fresh talent. Although they have a dual education collaboration with vocational schools in the 9th District of Budapest and Szigetszentmiklós, but even the 18-year-olds graduating from those schools won’t take a job for a net monthly salary under HUF 300,000. Their trucks, however, keep on rolling, and have even geared up over the past three or four years. This is in part because Delta-Truck has secured an exclusive dealership agreement with Ford Trucks for Hungary and Slovakia, and partly because Hungarian transporters who thrive on the EU market are renting more and more new Volvo, Mercedes, DAF and Ford trucks. Meanwhile the headcount of the two companies has increased to 110, and they have set up a team of 10 in Bratislava, which moved to a bigger site on 1 June. In response to the question of what he thinks is the secret to success, the managing director lists the following: the work of the management, their professional staff, and the good organisational structure of their group. They have five business units, including one for new and second-hand vehicle sales, and renting is divided into departments for small and big trucks. Repairs also makes up a separate unit. The five business unit managers, Péter Stefkó, and Boldizsár Stefkó discuss day-to-day operations on a weekly basis—which is increasingly an opportunity to talk about what has to be done to set up the regional bases.