ELME Automatika believes in prudent, carefully considered growth. This 28-year-old company is one of the key machine builders in the automotive industry.

Dr István Kovács started working on product-development and machine-planning projects as soon as he ended his studies. He did his best to stand on his own two feet even before the political changes in 1989-1990, applying for and obtaining a private designer licence from the then Ministry for Industry in the early 1980s. Eventually, he established ELME Automatika Kft. with three colleagues in 1991. But their ownership structure changed not much later, as two of the founders left them soon after their start. The first few years were tough going.“Our operations were characterised by lots of work and little income”, reminisces Dr Kovács.

Most of their turnover came from machine overhauls and tool repairs. Their former colleagues and friends began working for newly established industrial companies around the city of Székesfehérvár, which provided them with a wide range of contacts in local companies. Thanks to their extensive networks and reliability, and albeit slowly at first, the company began to gain momentum. Back in the 1990s, they had several clients in the food industry who manufactured capping and bottling machines. But they soon realised that they would not be able to rely on this sector in the long run. It was not generating enough orders from them, as most companies did not order locally manufactured machines but imported them from Western Europe.

The two owners’ fundamentally different visions also presented an obstacle to the growth of ELME Automatika. In 2004, the other owner withdrew from management, and the Kovács family became full owners of ELME Automatika in 2006.“When I announced that I would buy out the other owner, everybody wanted to talk me out of it. Not only my lawyers, but a financial advisor as well. But I was confident in the future”, relates Dr Kovács.

As their customer based included several automotive manufacturers in the 2000s, the 2008 financial crisis hit them earlier than it did most economic operators. This is why they experienced their biggest downswing already in 2007. It was at this time that they extensively reviewed their cost structure and defined a survival strategy. They took every job they could in order to cover their operating costs. After six months of hard work, they got a contract that marked the end of their troubles. “When you’re in a difficult situation, the only way to find a way out is to stay calm. The worse the trouble, the calmer you have to be in decisionmaking. It’s worked for us so far”, says the managing director. 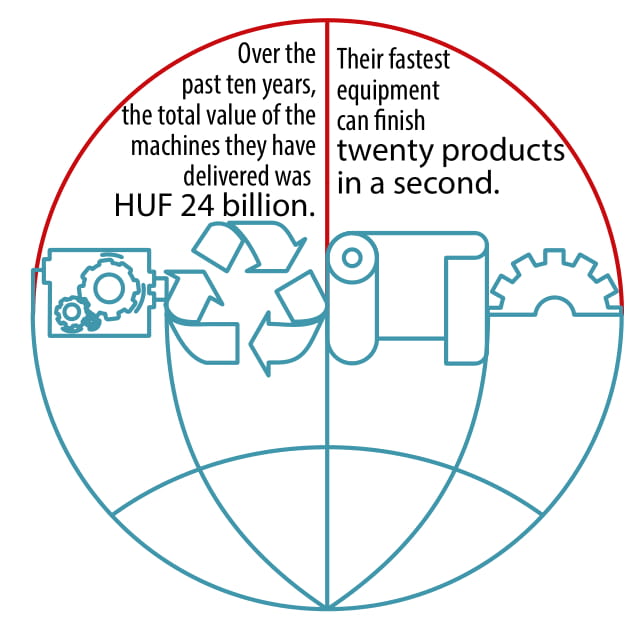 After the 2008 financial crisis, they started a range of investment projects. They improved their site, bought manufacturing equipment, and hired more engineers and production specialists. Project scopes were increasing in parallel with their capacity growth. Now they not only make minor machines, but also partly or fully automated complete manufacturing and assembly lines for the automotive industry. Sometimes this company of 110 employees finds itself working on five or six major projects at once. Making machines that are of the highest technical quality as well as ergonomically and aesthetically outstanding is a priority for them. When looking for technical solutions, they always prioritise elegance as well. Some of their clients have installed their machines for use abroad. Exports generate 30 to 40% percent of their turnover. Their currently strongest exports markets are Germany and Romania (on account of its ethnic Hungarian Transylvania region), but they have a significant presence in China as well. Their turnover has recently begun to grow rapidly, growing almost one and a half times between 2016 and 2017 to reach HUF 4.3 bn.

They are cautious when it comes to financing. Although the framework contract with their bank offers them the opportunity to develop faster, they still use their own resources to finance their operations. They only use external funds and loans for certain major projects, and only to an extent that does not make them overly dependent on the lending institution. At any rate, there is not stopping them in 2019 either. After further increasing their existing 2,750 m2 production capacity, they began to use their second manufacturing hall this year, which is now 1,500 m2 roomier.

In addition, they strive to promote environmental awareness in their manufacturing and designing. For example, they use geothermal energy for their buildings’ air conditioning system and also have an internal waste management policy that is subject to audits. They do not take care of the environment only. Their corporate social responsibility activities support disadvantaged children, like orphans, through organisations ran by the municipality of Székesfehérvár. Intergenerational succession has also become a cardinal issue for ELME—just like for many other companies were established around the time of Hungary’s regime change in 1989-1990. The managing director laid the basis for takeover in time. His son and daughter have been working for the company for 10 and 7 years, respectively. He is gradually handing over management duties to his children.“I don’t even go to meetings anymore. I’m only involved in strategic projects. The company could virtually run without me”, explains Dr Kovács.

The company has kept its flat organisational structure and an extremely low rate of employee turnover. They even once had a former employee come back to them after a brief stint at a competitor, bringing some new colleagues along. Partly because of their competitive wages and good working conditions, and partly because of their trainings, Hungary’s widespread labour shortage has had scarcely any effect on ELME.

To further increase their efficiency, this year they joined the ELITE Programme, the international business development training organised by the London and Budapest stock exchanges to support medium-sized enterprises in getting to the next level.

Constant development is crucial for them as the automotive industry undergoes continuous transformation, such as the new technologies and manufacturing methods brought by Industry 4.0. The company makes every possible effort to adjust to the changes, an aspect which is clearly appreciated by their partners. Orders are pouring in, and by the first four months of the year, they already have their whole year’s work planned out for them. Now their goal is to get to the upper segment of Hungarian medium-sized enterprises.