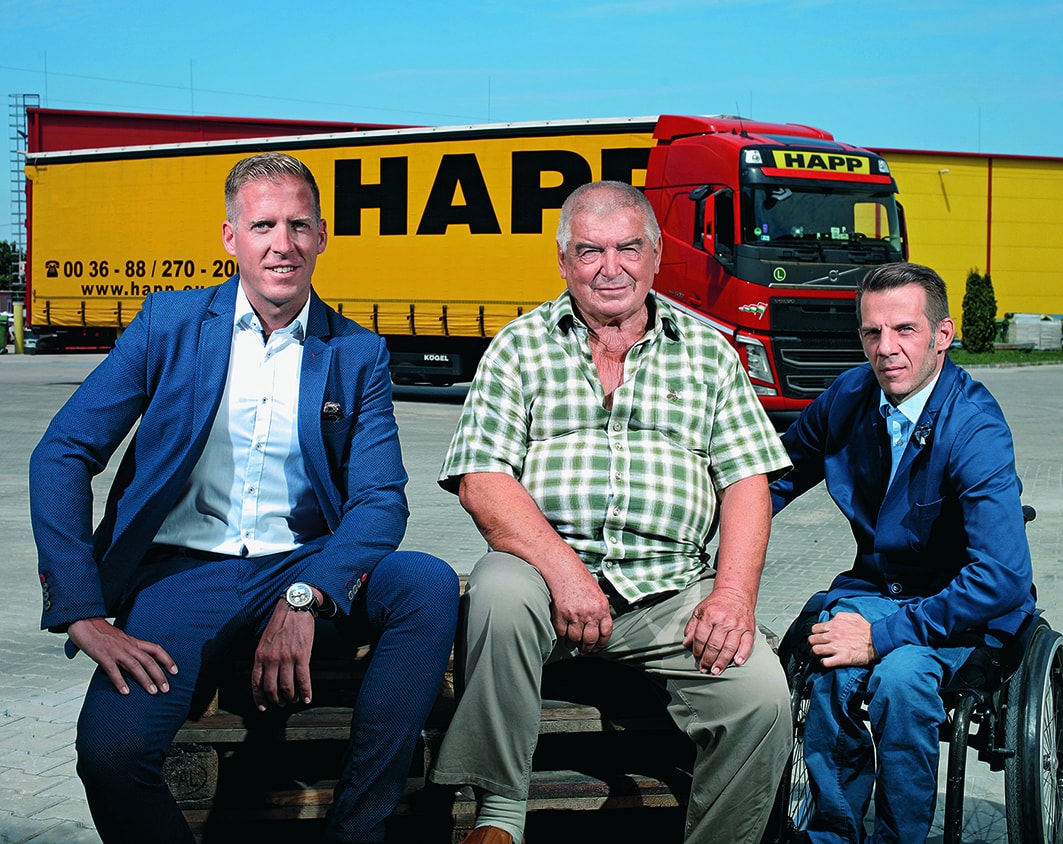 International and inland cargo transport and warehousing company Happ Kft. started out with just one Avia lorry, but now has sixty vehicles.

The story of Happ Kft., a transport and freight-forwarding company, started in 1991, in the sitting room of János Happ, in Márkó, a village in western Hungary. The company founder transported cargo as a second job with an Avia that he bought on money borrowed from his family. First, he transported for multinational companies setting up sites and offices in Hungary. He immediately started with international transports. His first cargo was for an electronics company which is still their client today, and a strategic partner at that. The value and the reliability he offered brought clients after another, so he did not have to advertise. Three years later, they had four cars. The founder quit his job at the petrol station and turned all his attention to his enterprise.

After Hungary joined the EU in 2004 and permit application ceased to be mandatory, they started to dynamically expand their trailer-truck fleet. It is true though that they were awarded a permit to purchase two trucks in 2003. Back then, there were still limits on the number of such vehicles in Hungary.

The son of the founder, Olivér Happ, was brought up together with the company. He was a car mechanic apprentice during his school years, then, after getting his B driving licence, he started making deliveries with a van. He began working in the office after finishing secondary school, and after his college graduation, he started his full-time career at the family business. Olivér Happ has focused mainly on sales. It is partly for this reason that their turnover has increased from less than HUF 1 billion to HUF 3 billion. His brother, ten years older, also works in the family business and is responsible for technical matters and for selling and buying trucks. János Happ, the founder, still comes to work at the company every day, but his sons have already taken over the operations.

Nowadays, they are also active in inland freight transport and warehousing. Their main clients are from the electronics and automotive industries. They also get quite a few orders from second-tier and third-tier automotive industry suppliers. “We’re the central distribution warehouse for a 50-shop Hungarian retail chain. They use our facilities to put the orders together, which we then take to the shops. We serve many Hungarian SMEs as well. Our development is based on our own resources. We’ve hardly ever used external funds, because we’ve always reinvested our profits. We don’t have any loans, though we leased a few vehicles when the Growth Credit Programme was started”, Olivér Happ says.

They built their first 5,000 m2 warehouse in 2012, and now they have a 15,000 m2 high-shelf warehouse. Their last-year’s developments in this business unit are worth HUF 1 billion, and, although funded with credit, it will all be paid back this year.

Their fleet now counts 60 vehicles, and they offer a broad range of services. They have minivans, refrigerated vans, and tarpaulin vans. Their fleet has everything from category B vans to trailer trucks, the common vehicle type used in international transport. Half of their vehicles are vans, while the other half are trucks. Of their orders, 80% are from international clients, and 20% from within Hungary. They replace their vehicles continually, every three to five years, each one driving an average of 120,000 kilometres a year. Usually, they replace 10% of their fleet. Some 70% of their transports go to Germany and France, and the rest to other destinations all over the European continent.

Although they also work with subcontractors, they are still able to satisfy almost all the market demand on their own. They usually transport dry goods, bringing shipments to and from Hungary only, not within the territory of other EU countries. 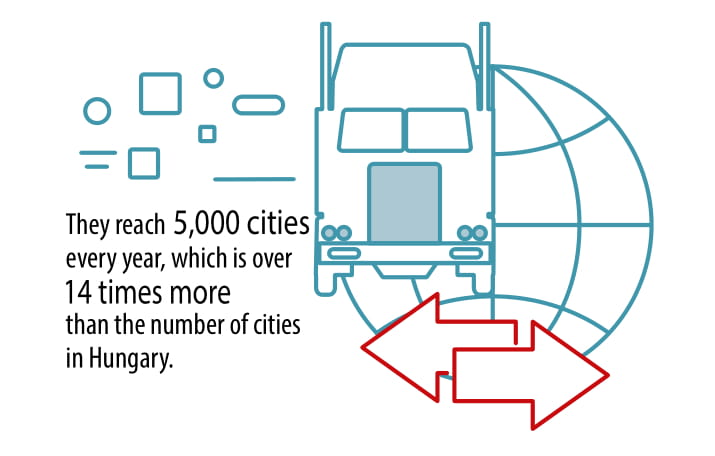 “Our 2,000 client list ranges from multinational companies to small enterprises with a few colleagues only. We started with one worker, but now we have 80. Being not too big for small businesses and not too small for big ones is one of our competitive advantages. The biggest part of our transport volume comes from the multinational clients, but we can provide quality services to our manufacturing clients as well, for which they are ready to pay more. This optimum size means that we’re now in the 60th or so place on the top 100 of our industry. We don’t want to get too much bigger on the long run either. We want to grow, of course, but not too quickly. We are now somewhere between an enterprise and a corporation, and we want to keep this balance and our family-like culture. We’re very accessible and flexible in our service provision, and have extremely direct communications with our clients”, emphasised the managing director.

“Our market has never been an easy one, and there’s always been an oversupply of shippers. Operators who have survived the past few years under the same name and with the same tax number have, however, grown used to the competition. The labour shortage limits our ability to expand our capacities. We try to overcome this with employee trainings. We pay for the higher-category licence application procedure for staff members who drive our vans with their category B licences, and they typically stay on with us afterwards. Employees who spend two or three months driving vans and like this way of life generally stick with the company for the long term. We make sure they can have a private life as well: our international drivers can also stay home for two or three weekends every month. We also organise many company events. Our cooking contests and bicycle trips bring the team together”, explained Olivér Happ.

The company pays attention to employees not only at the workplace, but in the broader environment as well, sponsoring sports events held in Márkó, where their site is located. They provide trucks to serve as event stages and also help with any delivery work for these events. Another cause they have donated to is a project to publish a book about the village.

Olivér Happ expects that self-driving will appear in cargo transport in a few years, and that it might well bring major changes. He drew attention to the serious social implications of self-driving vehicles, as it could mean that many drivers would lose their jobs in the sector. For that matter, wages at Happ Kft. have doubled over the past eight years. It took them about a year or two after the 2008 financial crisis to start to expand their assets and to hire a new workforce again. Now their drivers earn an average of HUF 500,000 to 600,000 per month.