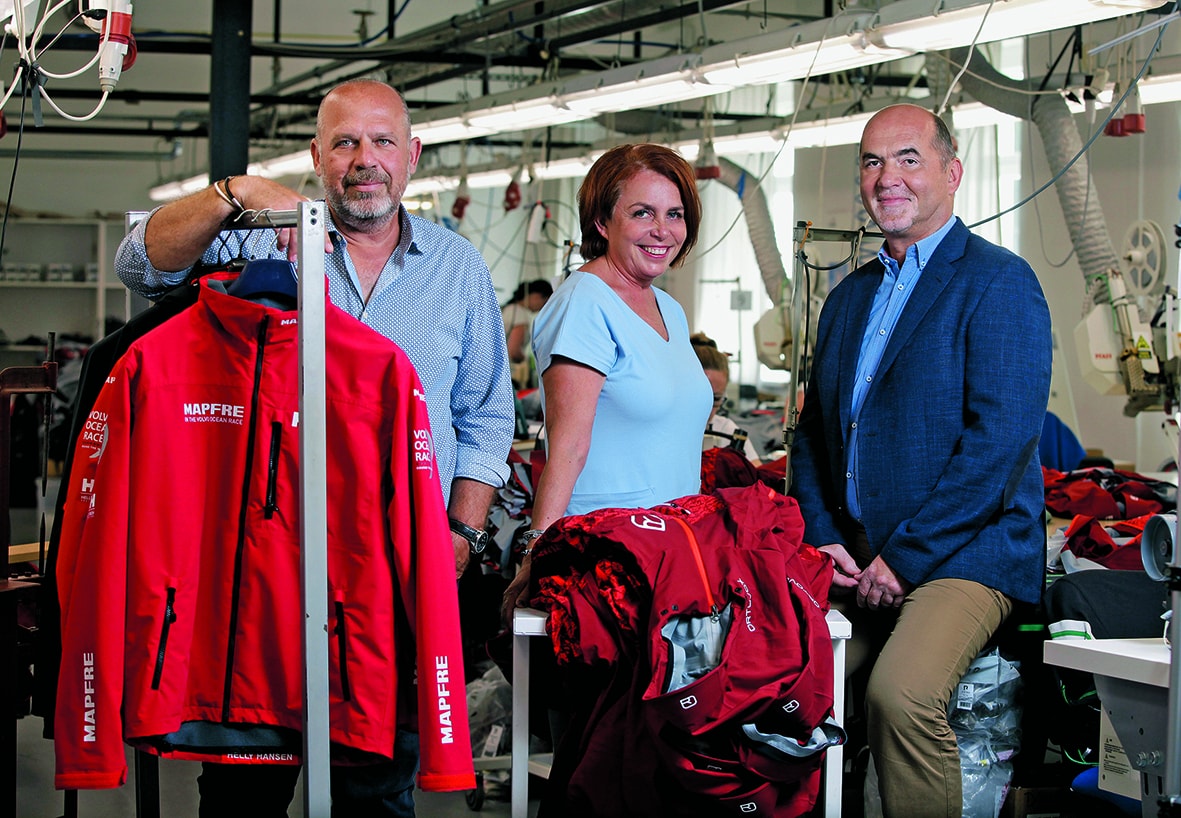 This company in Komló, a town in southwestern Hungary, conquered two segments of the international textile market with its extreme-duty protective clothing.

PI-ER’s life jackets and technical clothing end up in even the most dangerous places on earth—and that’s what they are made for. They provide maximum protection for yachtsmen and -women or hikers and mountain climbers going above 8,000 metres. The appeal and great design of their professional clothing make some of their other products, such as their impermeable sailing jackets, widely popular. Most people do not know that the life jackets aboard their yachts, or their ski suits they wear when gliding down the he Alps are made by PI-ER—because PI-ER has not built its own brand. But if you buy the life jackets of the Norwegian Helly Hansen brand or the German Secumar brand, then you will most probably get a product made by PI-ER, just like when you buy technical clothing made of the Swedish Tierra or British Mountain Equipment or Austrian Löffler Gore-Tex material, for bigger outdoor adventures. The Hungarian armed and law enforcement services buy from them quite often. The Hungarian Defence Force placed its first order with them in 2008 for the development of impermeable clothing, and the company has recently supplied clothing for Hungary’s Parliament Guards and National Police Headquarters. Hungarian border patrol officers protect the country’s southern border in gear made by PI-ER, and they also make workwear for British and Tyrolese mountain rescuers. Their figures also reflect the interest in their products. In 2017, their revenues increased by 64% to HUF 6.2 billion, and their EBITDA increased by 110% to HUF 537 million on a year-on-year basis.

The owners of PI-ER attribute their success primarily to their entrepreneurial spirit and bold decisions. They say they have never hesitated to take advantage of opportunities. Three of the four owners, Ferenc Erdősi, István Pidl and Katalin Szalánczy, met and became friends as economics students at the University of Pécs. It was then natural that, in 1995, they started their textile business in a rented building at the site of the failed Carbon Clothing Company in Komló, after its liquidation and the auctioning of its real estate assets. This was the time when Mrs András Pelyhe, a qualified and seasoned expert from the garment industry, joined them and became the fourth owner. They first they worked with subcontractors—just like everybody in the Hungarian clothing industry—, but soon realised that this approach was not for them. They wanted more independence. Fortunately, they did not have to wait long for an opportunity, the Norwegian Helly Hansen, already a well-established brand of sailing clothing at that time, contacted them in 1997. They delivered the first order of workwear still with the help of subcontractors; but in 1998, when PI-ER Kft. and Helly Hansen entered into a long-term contract for life jackets, they developed a new model in which PI-ER was responsible for everything from material procurement up to manufacturing and the delivery of finished clothes—i.e. the entire supply chain. It was at this time that PI-ER Kft. took out its first considerable bank loan, as they had to pay in advance for the materials they purchased. It is said that the clerks of the bank still have the piece of graph paper bearing their first business plan—which, incidentally, they accepted. The cooperation model with the Norwegian company turned out to stand the test of time, and they adapted it to their other business relations as well. In accordance with this model, they make the cutting diagrams and prototypes based on the model sketches sent by the client, and start to purchase the materials and to manufacture them upon approval. 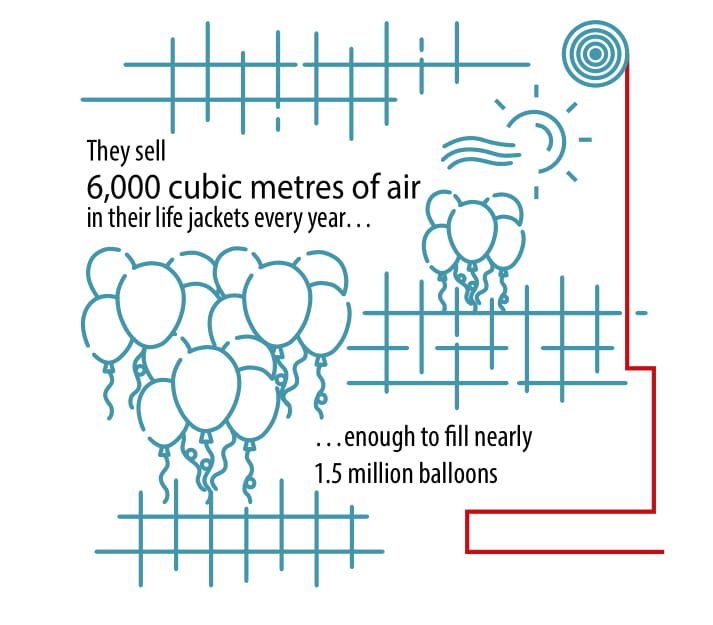 When order quantities started to increase, they had to hire more and more employees, and eventually started to outsource operations abroad. First, they established a company in the Hungarian-speaking region of Ukraine. Three years ago, they found a suitable supplier in Vojvodina (Serbia) and ultimately contracted another subcontractor in Romania. The company currently has 250 employees in Hungary, in Komló and Sellye, and their subcontractors have between 700 and 800 employees.

They’ve come a long way, but it hasn’t always been easy. The current state of the textile industry is far from ideal: wages have soared, and young people are not particularly interested in the trade either. But the owners still believe in the future of the company. They have managed to establish themselves in a segment where they can generate high added-value, and there is little competition within Europe. There is more to success, though, than just making good decisions quickly. Products ordered must meet top quality standards, and the manufacturer must take responsibility for this. Both of PI-ER Kft.’s product lines are based on trust. A life jacket must be functional in case of emergency, whether if it is on a private yacht or a luxury cruise ship. This is especially true of their self-inflating life jackets. Their technical clothes also have to perform under extreme conditions. In the Gore-Tex test laboratories, it is not permissible for even one drop of water to get under the impermeable clothes. It was not easy to get a licence to manufacture the three-layer products of this American company. They have also obtained an ISO certificate and the NATO qualification. They have a development department with 40 employees in Komló for product development and innovation. This allows PI-ER to compete with its Asian competitors which have better conditions owing to lower wages and locally available materials. The company buys 80% of its raw materials from Asia and only 20% from Europe, although it was the other way around 20 years ago. The long distance increases the company’s credit expenses, customers pay in 60 days—and this long financing period is further extended by the manufacturing and delivery lead times.

The faith and optimism of the owners are well illustrated by their latest plans. They regard organisational renewal as the most important and have divided into two parts. The first part is about strengthening their middle managers by giving them more autonomy, which implies more responsibility and risk-taking. The second part is about involving their children into the company’s activities. Two of the owners’ children, Réka Erdősi and Máté Pidl, both in their twenties, have already started to work at the company. The company has also started a logistics development project in Komló—together with some other businesses and the municipality. They need the space, because the 500,000 life jackets they make every year would fill 80 semitrailers. In addition, they want to add motorbike gear to their product range.

PI-ER Kft. is happy with their locations in Komló and Sellye, and enjoy good relations with the local communities. For years, they have been sponsoring Komló’s annual choir festival as well as the town’s handball team. They feel that they have an obligation to provide employment until retirement age for those local employees who helped them get started. Although the future has some more challenges in store, they are ready for it. Life-jacket production is shifting towards robotisation, new materials are coming up all the time, so this area is also full of developments. The main innovation focus is on breathable fabrics that allow perspiration to escape, besides the development of more durable clothing.