Rationality with a touch of intuition - OXO Group - Bet site 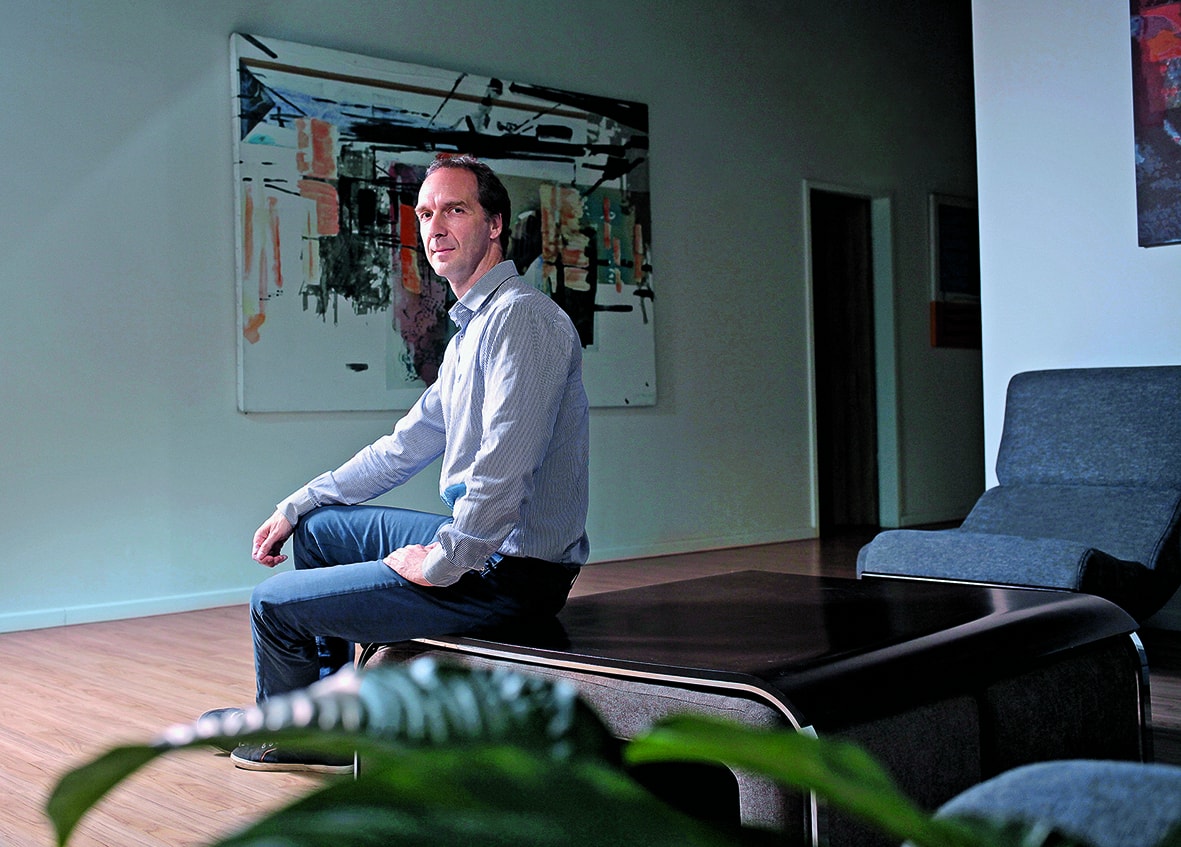 Péter Oszkó, Founder and Owner of the OXO Group

The OXO Group finances and develops technology startups from their early stages through to expansion and buying-out stages. They also want to go public in the future.

Péter Oszkó—leader, founder, and owner of the OXO Group—started building his own company in 2014 with the knowledge, experience, and social capital he had accumulated so far. Before that, he had worked in consulting and risk capital investment, areas which he enjoyed then because he found them diverse, dynamic and inspiring, and he still does today. As he wanted to deal with innovative, emerging, and special technological developments as well as enterprises changing the market and business practice, he started to work with teams that were in the process of turning ideas into businesses. Later, when they become appropriate targets for investment, he would be the first to invest in them and then he would bring in other investors as well.

The first company of the group, OXO Labs, started as an accelerating and consulting company and aided startups. The first investment company of the group was established in 2015, and from then on they were “angel investors”. “Many started to adopt a similar mindset and open to novel business ideas at the time, so I was able to make contacts with several co-investors as well as quickly build up our team. Several angel investors invested in the high-risk but innovative technological projects, and we concluded that we would do better if we built a bigger and more balanced portfolio by pooling our financial resources and business knowledge. Our original goal was also to start with private investors, then to involve their institutions, and to eventually go to the capital market. We have now reached the point where the latter is a realistic objective”, said Péter Oszkó.

They have seen themselves as pioneers from the start: they were the first to set up an angel investment company of several independent private investors in Hungary, but they also want to continue their pursuits by getting listed. They want to introduce an instrument found on stock markets in the English-speaking to the Hungarian market by listing their technology investment company that deals in risk capital investment. Thus, investment would be implemented not only within a closed group, but also through the purchase of publicly listed liquid investment instruments. Oszkó also added that for many investors, liquidity renders the risks of high-risk technology investments manageable, and also allows them to share in the growth opportunities of this industry, all while distributing risk over a bigger portfolio. He emphasised that this type of investment is new in Hungary. The only options private and institutional investors have had so far were either getting a share directly in the technology companies or investing in private and closed-end institutional funds with terms of about eight to ten years.

Their investment policy is to be active in essentially all fields of technological innovation. Given the characteristics of the Hungarian markets however, they invest more in technology innovations with a B2B business model. At the beginning, they invested between HUF 30 to 50 million in each company—nowadays, this amount is around HUF 150 million, which they plan to increase further. Involving institutional investors means that they can appear in the HUF 1 to 1.5 billion segment as well, i.e. they can also back companies that are in a more mature stage of growth. This also means that they can assist the companies in their own portfolio to develop further. Besides investments, they also want to introduce buyouts—the first of which took place last year. They secured an agreement for the purchase of a complete technology portfolio in a single transaction. They expect that technology companies that suffer liquidity problems after one or two investment rounds will become increasingly typical of the Hungarian market. These companies often have investors handling public funds who are often forced to leave them, and OXO wants to select the companies in this situation that deserve further funding. In addition to investing in the early and growth stages of startups, they also want to be active in buyouts, which would also ensure market funding for startups brought up from public money.

It is never easy to decide which company they should work with. When they join a company in earlier stages, the staff tends to be a decisive factor. That is the reason why a company undergoes a great deal of changes from its start to until it launches a specific product. Consequently, they have to assess the adaptability of the company founders—because they often invest in products and markets that do not even exist at the time of the investment and also evolve continually. Thus, they rely mostly on their intuitions in their decisions concerning early-stage investments, although they can make more specific market analyses to assess companies that are at a more mature stage.

“We can address an increasing number of investors, we can build an increasingly growing portfolio, and we can provide funding for more and more mature companies. Their write-off rate is lower than the industry average. Only 3 of our 28 investment projects so far have been closed; the other 25 are, however, still active, and we even have several projects where we’re negotiating potential buyouts or even a complete sale of the company”, added Péter Oszkó. He added, with justified pride, that the average investment term of their entire portfolio is 18 months, and that their latest portfolio evaluation showed that it was worth three times as much as the investment value.

“We have many favourite investments, like a company offering classic hosting services and running steadily with a 20% profit margin. But we also have a company operating an online recommendation system and generating billions of forints in revenues, or another one dealing with designer concrete products. To mention an example at another extreme: we also have an early-stage ecological housing project which we started to support when the first product was still in the design phase. The product has since then entered the market and the company shows a promising sales trend and a completely self-sustaining business model. Another example from our diverse portfolio is an agricultural innovations company that has developed a mobile app that improves the weighing operations of livestock companies. We also have a nicely growing company that develops HR apps to support recruitment processes with software and AI-based solutions—and we could go on with similarly promising projects. All our companies face challenges, of course, but we actively help them in overcoming these challenges so that they can emerge from these tough situations stronger than ever”, added Péter Oszkó, who believes that success is the best source of motivation, but that difficulties are the best learning opportunities.

Their want the holding they will establish with their co-investors and several institutional investors to go public at the Budapest Stock Exchange in two years. This will help them raise more funds, by opening up towards institutional and private investors who do not plan for the longer term (usual for startups), but want to benefit from their growth potential opportunities for only one or two years. This holding will take over and continue to build the portfolio, including all their current 25 companies. Moreover, they also want to get some exits over with by then in order to assist future evaluations. “Economies of scale is our advantage, as only public or partly EU-funded organisations have bigger portfolios, and external investors cannot join them. A considerable portion of the money we risk is our own. Our group has been in the industry for five years and our professionals have decades of experience”, explained Péter Oszkó.

The total value of the capital invested in their angel investment company so far is HUF 650 million, but this amount also includes a subsidy from a fund assisting incubation-phase investments. Recently, an independent company evaluated the total investment worth HUF 950 million at nearly HUF 2 billion. The holding company has a HUF 2.5 billion in subscribed capital, and they want to raise similar funds with the next offering. Their concept does not only offer an opportunity for short-term, high liquidity investments in the tech sector, but also an innovative risk distribution solution by investing in multiple companies. This eliminates investor exposure to individual technology companies, as the combined performance of the portfolio determines future yields.

“I have more than 20 years of consulting and investment experience, and during the one year I served as Minister of Finance, I also had to work with crisis management. I have never been good at running well-established organisations and activities. My strength is adapting to new environments, market building and transforming companies that are going through a rough patch. My stint as minister was not about ordinary budget management either, but about coming up with a functioning government budget during the worst period of the 2008 financial crisis. Continual adaptation, crisis management and problem solving are important aspects of my current job as well. In doing so, I can greatly rely on my relevant management experience”, stressed Oszkó, who attributed these phenomena to the general idea of developing world-changing solutions from relatively little money.

“If we want to become serious tech investors internationally as well, then we have to increase our assets to over EUR 100 million, because this would offer more growth opportunities to the companies in our portfolio that have the potential to expand internationally. On the long term, we would of course be glad to increase our assets to the optimal level of EUR 500 million, which would make us one of the biggest regional players, and of course I also wouldn’t mind doubling even this amount at some point in the future”, added Péter Oszkó.