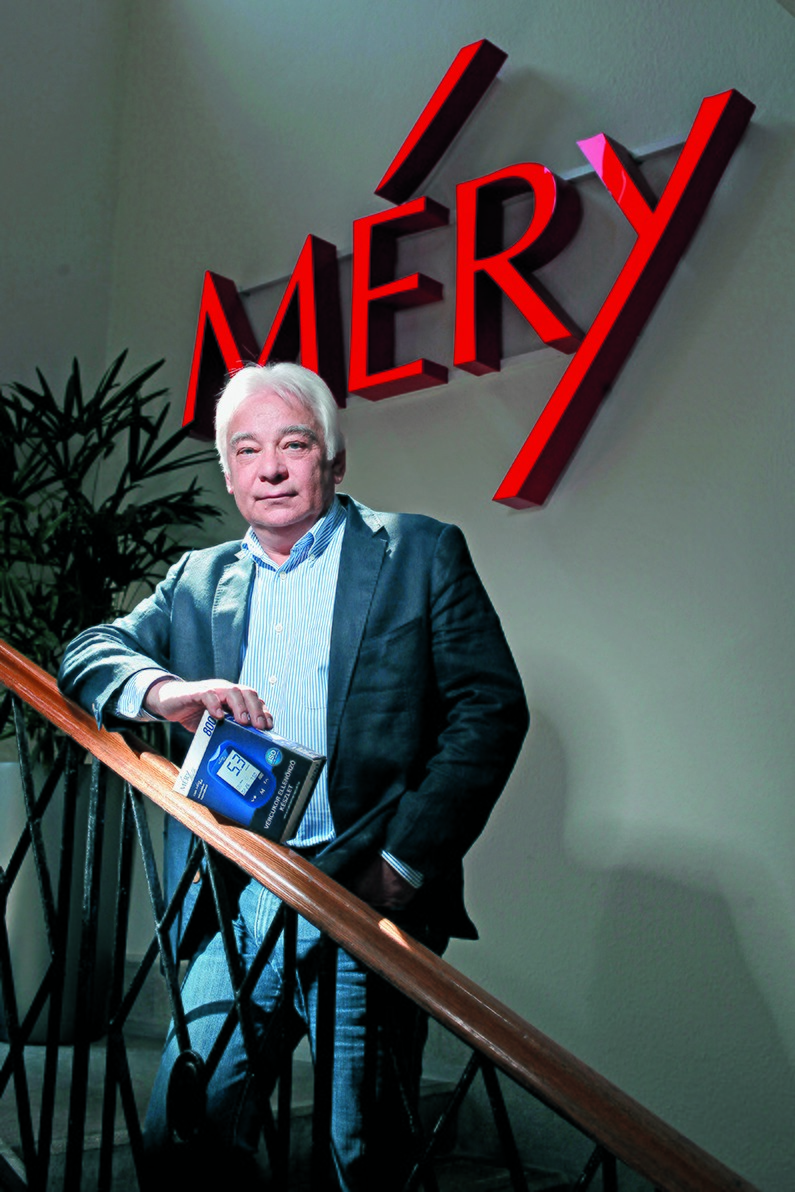 The story of Di-Care Zrt., a medical equipment manufacturer, started exactly ten years ago, during the 2008 financial crisis. They have since then covered one quarter of the Hungarian market with their Méry brand blood-sugar meters and test strips, products that have facilitated the lives of tens of thousands of diabetics easier every day. Their international expansion is also imminent.

“Some stock market gurus say that you should start your business during a crisis, because it will rocket afterwards”, says Béla Tímár, CEO of Di-Care Zrt. They are the living example of this approach, as they entered the Hungarian market in 2010 when the financial crisis was still raging, and banks were not willing to lend money. Their first few years were not easy. But the first three founders—seasoned at predominantly American multinationals—trusted the experience and business idea of the chief executive officer who is a chemical engineer, a doctor as well as an electrical engineer with an IT degree. His idea was to put a software-supported blood sugar meter onto the market. Ever since, they have continued to believe that digitalisation would be the future of the medical equipment market. An important factor of their start was that their extensive network in the pharmaceutical industry convinced a financial investor (with previous healthcare investments) to become their fourth founder. Later, a venture capital investor bringing EU funds helped them overcome their initial funding difficulties. In the meantime, they have bought out this partner, taking Di-Care completely in their own hands.

When they made their initial study of the blood sugar meter market, they noticed that it was not very segmented. A Hungarian company had an 89% market share, while a multinational (the market-leading test-strip supplier) held 10%, and three of the so-called Big Four key players had not yet entered the Hungarian blood sugar meter market. This meant that they had found a market niche to gain a foothold. They were also lucky in being able to find a reliable partner in Asia. They contracted a Taiwan company to manufacture their devices bearing their Méry private label, and have been working together ever since. The devices were called Méry for their function—if pronounced in Hungarian, the brand name means “it meters” or “it measures” in Hungarian, which is made into a play on words in their slogan. The team at Di-Care is very proud to have developed the first blood sugar meter with a Hungarian menu structure, Méry Pille, and that its designers were also Hungarians. Device manufacturing is the easiest part of the process, while the difficulty lies in finding the cheapest and most efficient means for the uninterrupted manufacturing of high-quality test strips, explained Béla Tímár, as they contain a special enzyme that reacts with blood sugar. Only a handful of companies produce this enzyme, and test strip manufacturers buy that as a raw material. 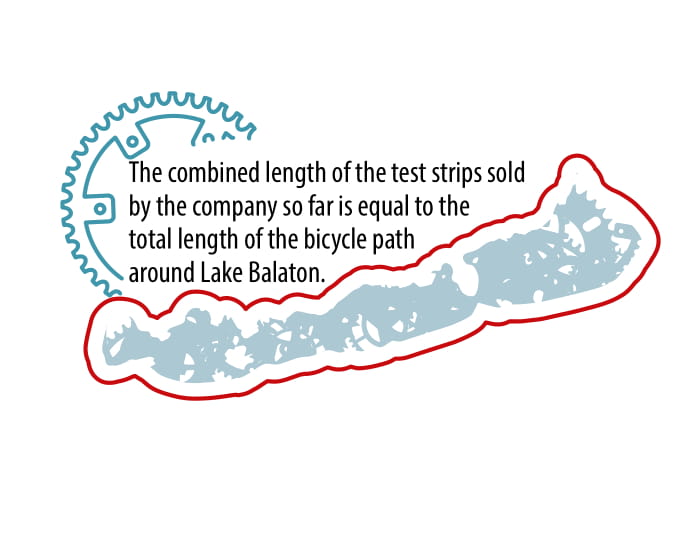 The start was difficult because the founders were not familiar with the medical equipment business. As outsiders, it was difficult for them to gain a foothold, as some market players tried to push them out, recalls the CEO. At the beginning, the founders first travelled around the country and visited doctors themselves, presenting their devices and business model. This personal contact and their direct style worked, and, although the first three years closed with losses, they were able to break even by the end of the fourth year and from then on, the business was off and running. Having worked together for several years, they were able to secure better payment terms from the Taiwan manufacturer, which was soon reflected in their profits. They currently hold 26% of the Hungarian market. Their first business plan aimed to reach 30% within five years, but things took another turn: a new competitor appeared in the third year and took 8%. The CEO does not see this as a mistake, but rather as confirmation of their plans. They are also convinced that precise planning is crucial for their results, which means a detailed business plan with a monthly breakdown for each year. They manage to perform this plan almost perfectly each year.

Most of the turnover of blood sugar meter manufacturers is not generated by the devices themselves, but the test strips—like major printer manufacturers who generate their profits on continually sold brand-specific toners. For those receiving insulin therapy, the Hungarian national health insurance fund covers 80% of the reference price of these 50-dose boxes, meaning that patients have to pay the remaining 20% (about HUF 540).

The amount covered by the national health insurance fund would not increase if they increased the price, and they would lose customers. Accordingly, there is not much competition on the test-strip market, as a price increase would cause Hungarian price-sensitive consumers—who chose from the same-price strips based on habits, sympathy and meter operability—to change brands.

Increasing measurement frequency would facilitate therapy customisation, reduce the frequency of complications and save money for the national health insurance fund, explains Béla Tímár. Some results have shown up: patient cooperation and responsibility are improving. Ten years ago, average daily measurement frequency was 1.4 for those receiving insulin therapy, now it is 1.64. Patient attitude has also improved, although the standard expected by the medical community however would be two measurements per day. The company provides patients with every possible assistance in this respect. For instance, the packs contain data cables to display meter data on a computer with a free app. Still, only 1.8% of patients have used this option so far—although the WHO reported that two-thirds of the data in handwritten blood sugar journal were false, i.e., there was no measurement, or the patient had manipulated the data. The situation is no better outside of Hungary: British data show that less than 2% of patients monitors their blood sugar levels.

This is why patient-independent data communication is becoming increasingly important, i.e., physicians should not have to struggle with unreliable handwritten journals. Di-Care solves this problem by providing doctors with a SIM-card communication box and a tablet to evaluate data downloaded from the blood sugar meter. This allows doctors to see blood sugar fluctuations, trends, measurement habits, and lifestyle changes so that they can adjust the treatment and the insulin dosage during consultations. They now receive the data of 45,000 patients on a continuous basis—with, of course, the patients’ consent, the authorisation of the Hungarian National Authority for Data Protection and Freedom of Information and in full compliance with GDPR requirements.

The future is clearly about digitalisation and automation. Béla Tímár believes that they must develop towards digital data carriers, data forwarders, analysis and therapy-support systems.“Like it or not, this is reality”, he said. Di-Care’s new DCM system can collect and display data in real time, even when the patient is at the home of a relative or at the doctor’s office. The system uses the smart-home metering technology (used in power, natural gas, and water meters) along with a GSM card optimised for low data traffic. After metering, the meter promptly uploads the data into the cloud, from where it can be downloaded and viewed in the system’s digital journal in a graph/spreadsheet layout. Di-Care was the first Eastern European company to buy the user licence of this display interface, the standard interface in the US and Europe since June 2019, in step with major companies like Abbott, Dexcom, Johnson & Johnson, Medtronic and Roche. The data now available do not only include measured blood sugar levels, but also allows for insulin dosage monitoring with a button on the insulin pen. This sends dosage data after injection. As an extra service, it also warns the patient to avoid making a repeated injection, which might be lethal. Prospects from several European countries are interested in the system. Clinical trials are currently pending, which, although they are not required for the CE label (which allows for sales in the European Economic Area), the company still wants to perform in order to prove the system’s usefulness.