Another forty years on the market - Márka Üdítőgyártó - Bet site 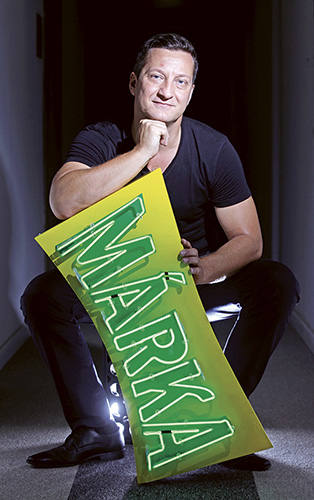 For enhanced productional and distributional independence, Márka Üdítőitalgyártó Kft. Has embarked upon a development project of three billion forints.

It was as early as the beginning of the ‘70s that the first 0.25 dl bottle of a grape-flavoured soft drink branded Márka rolled down the production line of Délalföldi Pincegazdaság. In the following years up until the ‘80s, this beverage, just like other domestic soft drink products, was bottled at several locations of the country. Although the product disappeared from the shelves for a certain period of time, the brand – with four decades of presence on the domestic market – is regarded a real survivor to such an extent that by now Márka is the only Hungarian company on a fiercely competitive market dominated by large international producers. Around the millennium, Tibor Pécskövi and his brother re-started the operation of the successor entity of a formerly state-owned bottling plant besides seeking trademark protection for the brand. A couple of years later, they set up Márka Üdítőgyártó Kft. in 2007, by purchasing the trademark.

The process did not quite go smoothly, for the legal dispute in connection with the brand could not be settled for years, which however did not affect the family-owned company in terms of product and business development, nor in strategic planning. Right from the beginning, the owners identiﬁed continuous renewal and innovational approach as the major principles of their market strategy. This was – after a short period of stagnation – duly conﬁrmed by the reported gures: in 2015, the company doubling its performance from four years earlier, reached net sales revenue of 2.6 billion forints with nine large partners, over one thousand three hundred points of sales. Their presence on the domestic market is predicated upon a market share seven times as large as their initial one percent. They anticipate sales revenues to exceed ﬁve billion forints in two years’ time. Expenditures on development and innovation deﬁnitely have a good return – says Tibor Pécskövi.

Today, more than ﬁfty different products of the company are on the shelves. Their decision to diversify products beyond the category of ﬁzzy drinks has also proved to be successful, because the share of “still products” has increased to 35 percent within turnover. The key to Márka’s modern-day success lies, however, not only in the widely diversiﬁed product portfolio or in their distribution system with domestic coverage. They have also placed a great emphasis on communication and the re-positioning of the brand: they chose to take in the preferences of the younger generations, but they also managed to smartly capitalise on the so called retro style which they kept for the sake of brand identity. At the same time, the company’s further dynamic growth within the existing organisational structure seemed to be unsustainable, with their contract bottling activities clearly entailing a competitive disadvantage, often impeding the fulﬁ lment of demands.

As the owners expect a continuing trend in domestic market growth, and because they strive to beneﬁ t from the region’s impressive export potential besides extending their portfolio, therefore Márka Üdítőgyártó Kft. has opted for a green ﬁeld investment project in Felsőlajos requiring a capital expenditure of approximately three billion forints. The area stretching over several hectares will see the construction of a bottling plant – ensuring production independence in the future – as well as a logistics centre primarily aimed at reducing distribution costs, thereby providing employment for as many as ﬁfty people in the ﬁrst stage. Although the company is currently short of a non-refundable ﬁnancial grant amounting to six hundred million forints, it has started building the new centre deploying its own capital of six hundred million forints, an already awarded grant of five hundred million forints, and a bank credit of more than one billion forints. The entire activity of product development, various duties related to logistics as well as the multi-stage bottling operation will be all carried out in this single facility. The plant – stretching over an area of ten thousand square metres – will accommodate two state-of-the-art production lines fully equipped according to the current standards of the industry, which, if set to their maximum level of performance, could reach a total output of 100 million pieces of soft drinks per annum. In addition, the plant shall be suitable for contract bottling upon request.