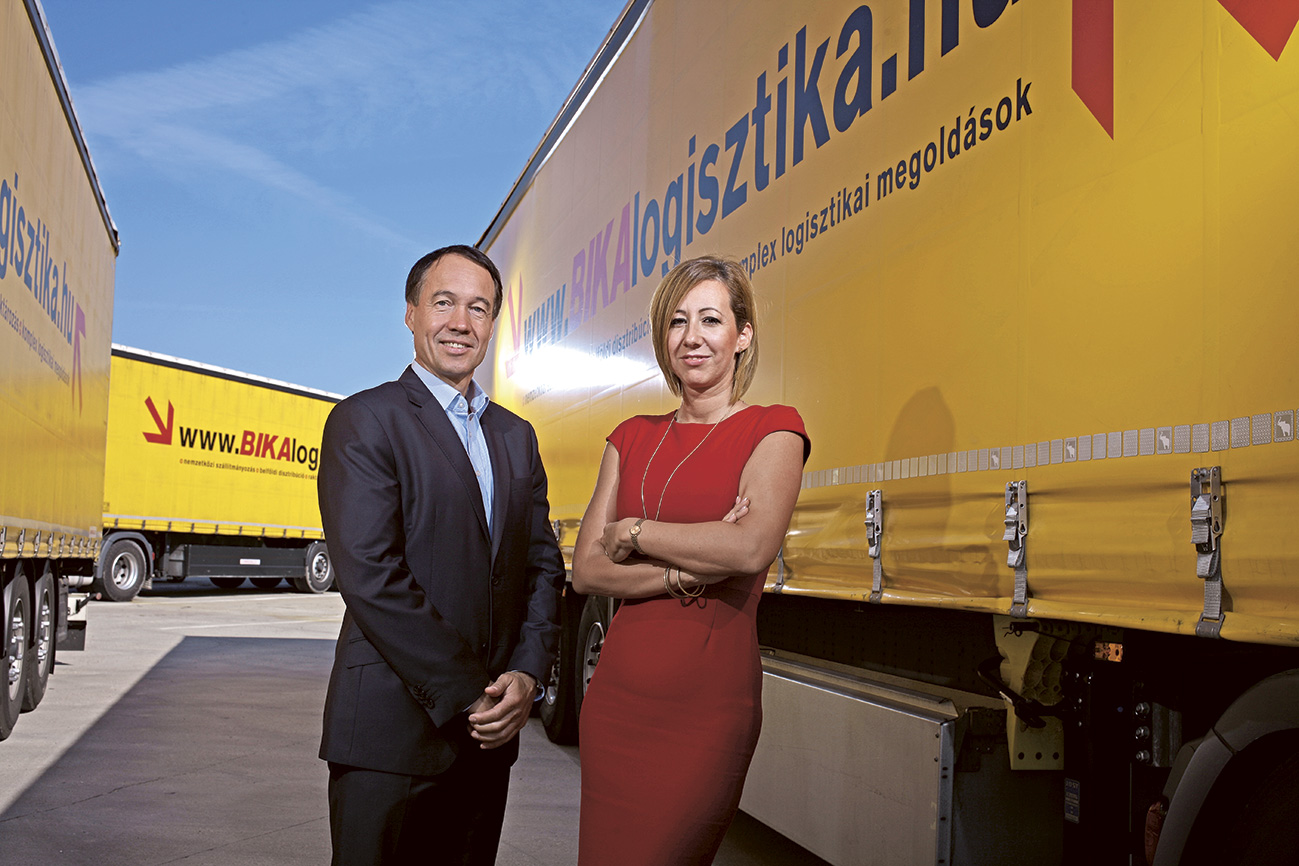 After an exemplary change of management, the Szolnok-based medium-sized company has successfully extended its activities to haulage by means of their own fleet of lorries. The founder’s children have also been engaged in the operation of the business.

I have no assistant, nor a desk anymore. It was a strange experience, this is how dr. György Karmazin, managing director of BI-KA Logisztika, recalls the period when he handed over control of the company built by him to Gabriella Szécsi. In fact, the handover was so carefully planned that the founder is regularly invited to share his views on the process. ‘The executive officer - owner is often inclined to think he is irreplaceable, doing the job of three to five people, which can easily lead to an entrepreneur’s burnout or decline,’ the businessman describes a most unfavourable scenario typical of many domestic SMEs. By contrast, he had been resolute, right from the company’s founding, that he would hand over the control to someone else already in his forties. He no longer takes part in the daily decision making, however he does participate, as sole proprietor, when it comes to strategy alignment.

For the preparation they applied the results of a Harvard study, and the process took eight months to finish. And it was not quite the smoothest period: it all happened in 2012, which has been regarded as the last year of recession in Hungary ever since. Coming back to work from her maternity leave at the time, Gabriella Szécsi, who had been employed by the company for ten years by then, started to take over control of the business in the middle of the same year. The fundamental development of the sales department was badly needed – just one of the challenges the professional had to face when officially taking the position of managing director on the 1st of January 2013. Setting up the company’s own fleet of lorries was one of the most pressing issues she had to attend to, for the business had been employing subcontractors until that time. They approached business development in exactly the opposite way as compared to other players in the domestic sector: they started out with freight forwarding through contractors only to gradually open for the fully fledged haulage business. Their primary goal was to ensure stable and firm transport capacities, and to increase the flexibility of customer service.

A considerable share of their sales revenue is composed of international road transport and freight forwarding. Concerning road transport, they are chiefly focused on the markets of Austria, Germany and France, while their freight forwarding activity is targeted at the Southern and Eastern European countries up to Russia. Thanks to their sound network of customers, order volumes from the region including the Ukraine have not diminished significantly – despite the armed conflict and the embargo. The company of 150 employees operates an own fleet of 70 lorries, financed by a mix of long-term financial and operating leases. The company’s capital structure is more than stable, the past years have seen the dynamic growth of both turnover and earnings. According to this year’s financial plan, the company is anticipated to reach 6.5 billion forints in sales revenue and 400 million in profit. Continuous growth is a key principle of their corporate strategy. Dr. György Karmazin already expects that his equity and the bank’s financing capacity will not be sufficient to allow for another large development project considering a turnover of 10-15 billion, especially if such development is to take place abroad. Therefore, he does not exclude the possibility of opting for external financing, whether through an IPO or by other means, but he does not think it is likely to happen any time before 2020.

The businessman, who earned a doctorate degree two years ago, now sets his eyes on much broader horizons. What he has in mind are those Western European family businesses which prove successful throughout several generations. Business journalists refer to such companies as hidden champions, and that is what they aspire to be, too. His children still study at university, but they have already been involved in the life of the company. His daughter works for the PR and communications department, while his son is engaged in corporate IT activities and also acts as managing director of the family-owned advisory firm. In the future, they will be free to select among vast opportunities since a full holding structure has been established around BIKA Logisztika in recent years. For the time being, the haulage business remains integrated within the parent company, but a separate firm (BI-KA Trans Kft.) has also been formed for that particular purpose, with a fleet of 20 lorries. In addition to the aforementioned IT and advisory activities duly outsourced to Adversum Kft., another company (Pro-Business-Q Kft.) has been set up for the development and operation of property such as warehouses. This is highly expected to be another corporate unit which shall support the parent company in a way that it shall not impede the flexibility of the main business.