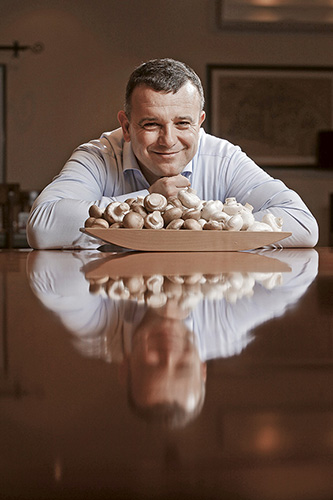 Throughout the blending of multi-generational farming tradition and transnational experience a regionally dominant agribusiness was born.

On a morning in the Kempinski he got scolded by his boss claiming that he is no team player. He went home, changed clothes, and showed up at the family business saying: ‘hey everyone, here I am’. That is how Árpád Mutsy recalls the day when he joined Bio-Fungi. Ever since, the company has evolved into East Central Europe’s leading mushroom company, producing ordinary white and brown button mushroom, organic button mushroom and oyster mushroom. Chemical- and pesticide-free cultivation is ensured by the application of state-of-the-art, computer-aided Dutch shelf-technologies.

He got familiarised with the entrepreneurial approach already in his childhood. He spent his youth years in Senta, Vojvodina where farming was passed on from generation to generation dating back to his grandparents’ ancestors – with his father extending the range of crops by mushroom. He graduated from the University of Horticulture in Hungary and started his career, in the early ‘90s, at a multinational company dealing with mushroom spawn production and distribution. During his 10 years at the company he successfully studied a large company’s culture and made a multifaceted network of business connections. His US bosses were already holding out the prospect of promoting him as director of the European markets, but his successes aroused jealousy among his direct superiors, leading to the ominous criticism. Ironically enough, the US businessman later acquiring the company got in touch with him, after reviewing old internal reports, and commented disapprovingly on the former management’s decision of letting him go, remarks Árpád Mutsy with humble pride.

When entering the company, Bio-Fungi operated as a small mushroom producing enterprise founded by his father, his younger brother and their childhood friend without citizenship and local knowledge. The company’s growth took many years. ‘As a result of the tremendous efforts the seed grew to a seedling from ’92 to 2000,’ summarises BioFungi’s first eight years of operation. After supplementing the company’s solid fundaments with Árpád Mutsy’s experience, business contacts and knowledge duly acquired in a multinational environment, the enterprise was finally placed on a growth track. Since 2003, turnover has been constantly rising and is anticipated to reach 8 billion forints, with an EBITDA of approximately 2 billion forints in 2016.

Apart from Bio-Fungi, the family empire – currently employing around 300 people – owns yet another business: Eurochamp Kft. specialised in mushroom cultivation reached a sales revenue of 930 million forints and an EBITDA of 232 million in 2015. In fact, 60 percent of Bio-Fungi’s sales revenue is derived from another activity, namely the production of compost as raw material. Back in the ‘90s, quality raw material was scarcely available, and that is why they chose to embark upon its production. In the beginning, they only produced for their own use than they started supplying an increasing number of producers, gradually becoming an incumbent on the market.

Compost production is an extremely timeconsuming process. Until now, the company has distributed no dividends among the owners for they keep re-investing their earnings. Larger capital expenditures are backed up by bank financing. In almost every year since 2003, the company spent an annual amount ranging from half a billion to one billion forints on capex, with some exceptional years, when they spent from one and a half to two billion forints. In addition, for the funding of a significant development project in 2004 and for the purpose of reinforcing the company’s capital structure, a financial investor from Western Europe was involved in the business. His presence required a reasonable level of transparency: he expected the management to file quarterly reports, he had a fair share of representation on the supervisory board, but he did not interfere with the day-to-day management of the enterprise granting absolute professional liberty. ‘The business worked like a small stock corporation,’ recalls Árpád Mutsy. The investor made his exit after 10 years, duly bought out by the company itself.

Having regard to the company’s impressive growth to its present size, the businessman is now closely studying the modern theories of organisational development and production management (lean, kaizen). He seeks to find the perfect blend of family and multinational business culture in order to create a proactive structure able to forecast and address challenges of the upcoming five-to-six years. They are proud of the fact that they manage to supply such a quickly perishable agricultural product within a radius of 500-1,000 kilometres. The compost is loaded onto the trailer within an hour following its completion, while mushrooms, once harvested, are delivered to the consumer’s table within the course of 24-36 hours.