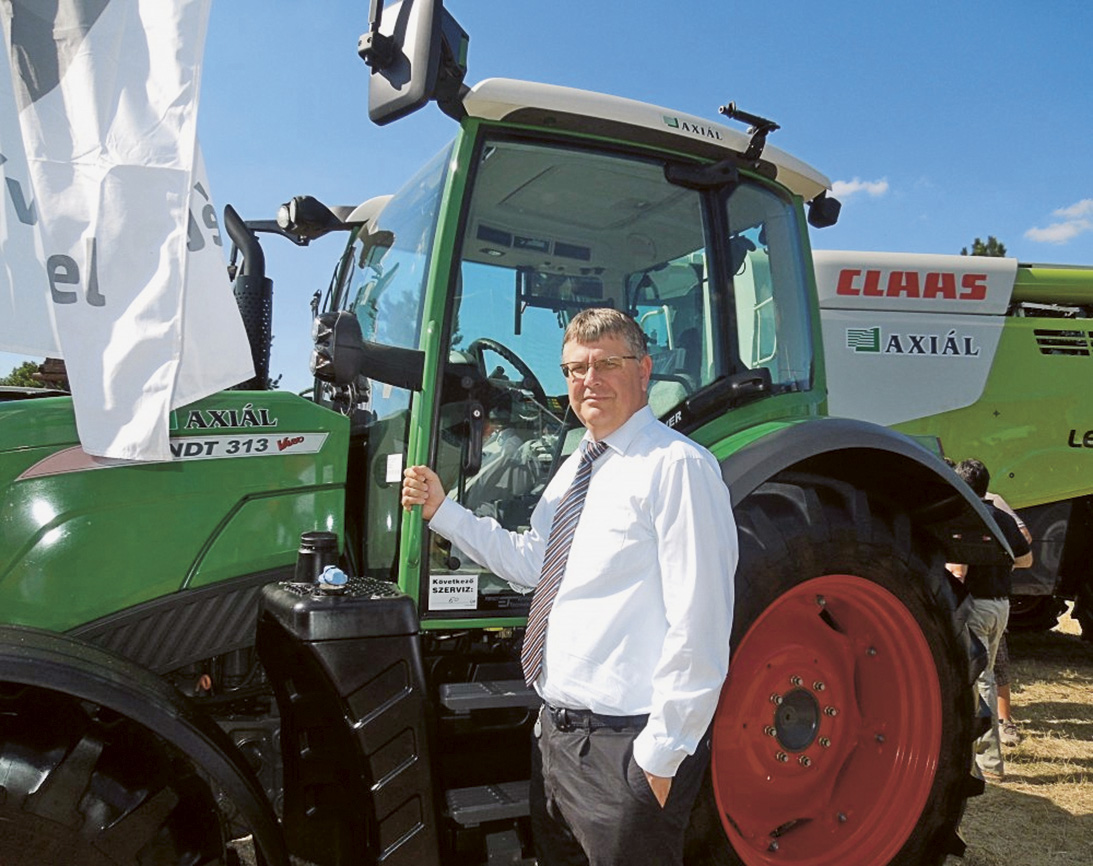 Zsolt Harsányi’s company, engaged in the distribution and maintenance of agricultural machinery and spare parts, has evolved into an enterprise of 700 employees, while still retaining its family character.

‘We would hold empty boxes on the shelves to show our abundance of goods,’ recalls Zsolt Harsányi of the old times. Back in 1991, he hired a room of 34 square metres which functioned as his office, shop and warehouse and started to sell IFA and Zetor parts imported from Czechoslovakia and Poland. The owner who trained as a mechanical engineer specialising in agribusiness, had worked as a service engineer at a company distributing agricultural production equipment from the socialist block countries - which were declining in parallel with the former regime. He compared the opportunity occasioned by the market gap with the deficiencies prevalent in the former supply structure, and founded – with a share capital of a hundred thousand forints – Axiál Bt., which operates today as a limited liability company.

Right from the beginning, the owner developed the company with a great deal of awareness. Although many echoed the old system’s paradigm implying that “workers are paid enemies”, he chose to pursue another school of leadership theory. Mostly due to this approach the 700-person company’s corporate culture is similar to that of a huge family business rather than a formally structured large enterprise. The point is that employees should enjoy what they are doing, otherwise they will not be able to serve customers at a high standard. There is no better proof of the success of the approach than the fact that workers are fond of promoting the company to their families and friends, thus ensuring that members of the next generation and other relatives are eager to join the company. ‘Father and son work together, that is a rewarding feeling,’ states the executive owner.

Axiál regards employee satisfaction as just as important as professional adeptness. The latter is supported by trainings held by their suppliers multiple times a year, and by the employees’ self-improvement. This and the professional customer service constitute the most important pillars of customer relations. That is how they have been able to build a stable network of customers, primarily large Hungarian agribusinesses, which is a key imperative for successful operation in this sector.

Although the last year brought more modest returns than the previous one, the company expects to grow significantly in the long run. Development could be considered rather steady than continuous which is peculiar to this sector. Demand is highly contingent upon such externalities as weather conditions and governmental subsidies. Axial strives to combat this volatility by offering high-quality auxiliary services such as maintenance and assistance services. The executive owner regards this as the key to their success, supporting his view by a classic quote from Henry Ford, namely: “It has been thought that business existed for profit. That is wrong. Business exists for service.”

In addition to his commitment to providing advanced trainings for the employees, Zsolt Harsányi, who reinvested all the profit into the business until 2011, is also devoted to improving the infrastructure of the company’s business locations. As part of a programme launched 5 years ago, the businessman builds new sites and also upgrades existing premises according to state-of-theart technological requirements. He deems this essential for growth. ‘One thing we know for sure is that change is certain, so that we have to keep adapting, improving and making progress,’ emphasises the owner.

What he identifies as the company’s most pressing concern now is the competition brought about by eastern agricultural producers. These companies constantly improve and launch an everincreasing range of products to the market. The gradually intensifying competition is reflected in performance figures and margins. Scarcity of labour is something they experience from close up. As chairman of the Hungarian Alliance of Agricultural Equipment and Machinery Distributors, Zsolt Harsányi contributes his fair share to the campaign Be an agri-engineer! and is committed – also as the owner of Axiál – to actively fostering young generations of high school students and undergraduates by means of scholarships and training programmes, thus ensuring the recruitment of market-ready employees for his company. After graduation, talented juniors chaperoned from their first academic year will be warmly welcome by the family-like community.