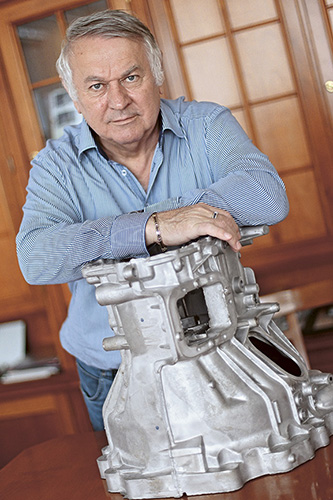 The CEO of the Békéscsaba-based Csaba Metál Öntödei Zrt. Directly supplying Volkswagen and BMW group expects an annual growth of at least 15-20 percent in the medium run. He got into car making through his german connections at the time.

It was in 1980 that Béla Majoros – originally trained as a mechanical engineer – working as a senior engineer at the Gyula-based Könnyűfémöntő és Betonelemgyártó Vállalat (a state-owned enterprise dealing with light alloy casting and the production of pre-cast concrete elements) became acquainted with the art of casting alloy from close up. Little did he know, nor could anyone be aware that this will be his profession for a lifetime. At the time of the German reunification he was already employed by a Baden-Wuerttemberg foundry. After spending three years abroad, he returned home in 1993. Duly supported by a business partner, he founded Majoros Metál Kft. in the same year, which was engaged in aluminium die-casting. Its customers in the automotive industry are largely due to his German connections. That is how the company has – via its German component making partners – become an indirect supplier a.k.a. “second-rounder”.

As order volumes swiftly increased, he decided to close Majoros Kft. and continue operations in his newly founded enterprise Csaba Metál Zrt. from 1999 on. In 2005, the company embarked on the production of metal constructions by acquiring the bankrupt Ikarus plant in Szeghalom. This is where Urbanus, the Hungarian Product Award-winning bus was developed, in addition to the production of chassis for various utility vehicles, superstructures, containers, spare parts, etc.

Csaba Metál, currently employing around 1,000 people acts as a permanent supplier of Volkswagen Group and is – since 2012 – a direct partner of BMW, with its cast aluminium parts being built, among others, into models of Audi, Peugeot-Citroën, Ferrari, FIAT, Ford, Jaguar, Mercedes, Nissan, Porsche, Renault, Toyota as well as Volvo. The company exports 80 percent of its production. The leader of the rapidly growing enterprise says that global hardships affecting the sector – including in particular China’s slow-down and the emissions scandal concerning the German car industry – had no adverse impact on the growth of order volumes. In fact, western car makers are inclined to relocate new projects into the East Central European region in an attempt to keep prices of human workforce at the lowest possible level. It is not unusual that system suppliers outsource their new orders to Hungary instead of China, often directly to Csaba Metál. The company produced 14 million pieces of spare parts last year, while expecting a growth of at least 10 percent for this year. As part of the company’s three-year programme of capacity expansion, launched in 2015, comprising a capital expenditure of 18 million euros, state-ofthe-art techniques and top-notch technologies are being integrated into the company’s production process.

Development will not, however, cease to continue upon completion of the investment project. ‘We have to keep on upgrading in order to fulfil the future demands of our customers,’ says Béla Majoros. In the presence of Hungary’s President János Áder, the CEO inaugurated – after two years – a brand new production facility in Békéscsaba, which was built by the This company as part of an investment project of 1 billion forints. It will be badly needed, for they expect another annual growth of at least 15-20 percent in the upcoming three years. For capital-intensive production and billionforint developments the company requires an increasing amount of credit and external resources, which is provided by partnering financial institutions along a rather strict financing strategy. The company – employing around 40 engineers – has been earlier granted access to several rounds of EU funds provided by the Economic Operational Programme for the procurement of new machinery as well as for improving corporate innovation.

‘At present, the business provides financial means for this long-term investment by utilizing one-off governmental subsidies and innovation tax relief in addition to equity funding and bank loans,’ says Béla Majoros who was elected by the jury as Role model at the Entrepreneur of the Year Awards of 2013 in recognition of his activity as a particularly innovation-minded entrepreneur.