Catching up to the leaders in the field - Alföldi Tej Llc. - Bet site 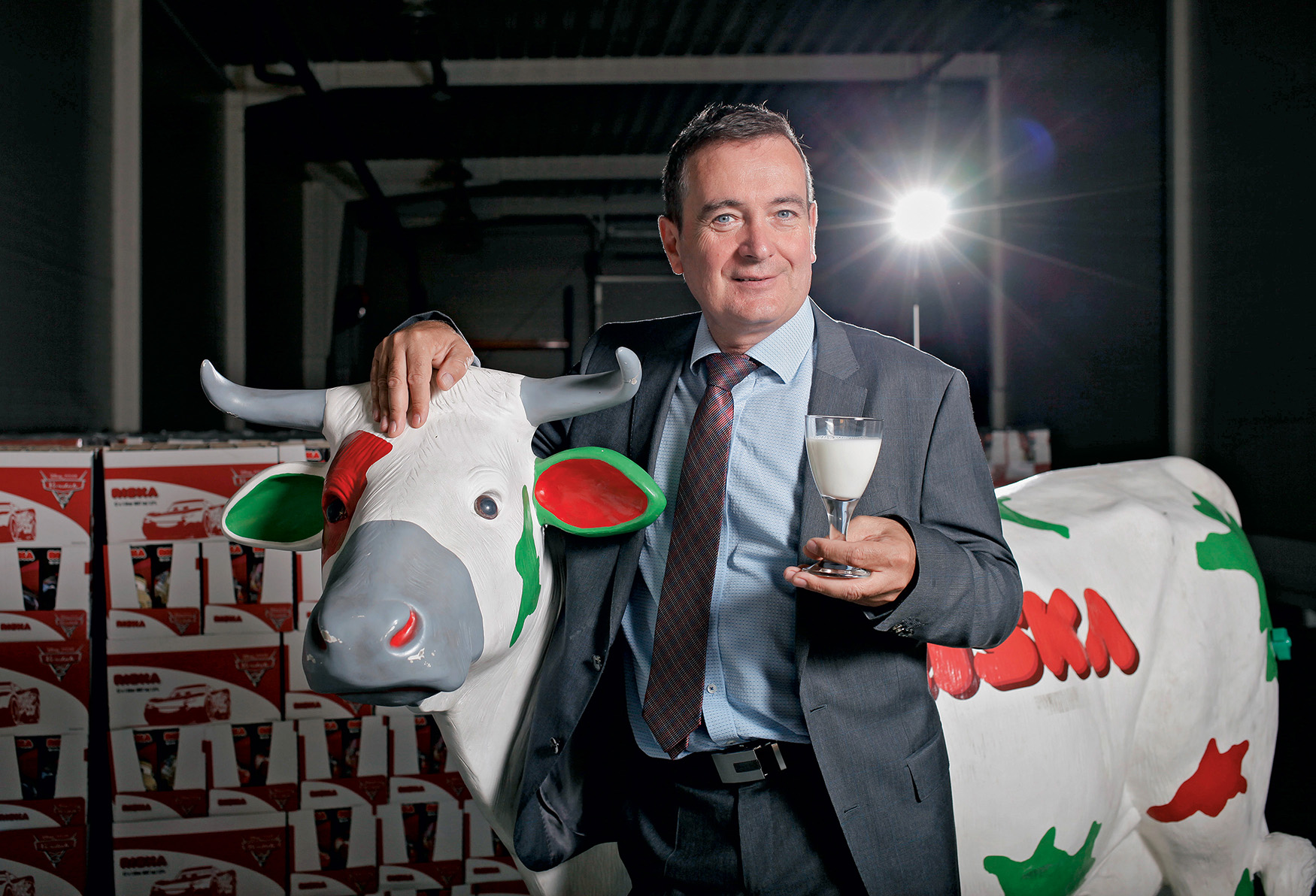 Year by year, Alföldi Tej has been growing dynamically and innovating continuously. The aim of its CEO is to create a procurement community from its members.

Agricultural engineer Tibor Mélykuti has been leading Alföldi Tej, a sales and procurement company, founded in the city of Debrecen in 2003 with 22 members. Two years later, at his initiative, they purchased the bankrupt Parmalat Hungária Ltd’s dairy product processing plant in Székesfehérvár. In November 2005, in the middle of the dairy industry crisis, the association founded with a registered capital of HUF 6.7 million and an annual production capacity of 85 million litres acquired the dairy plant entirely on credit, backed by a state guarantee. At the time, the plant employed 430 people, and processed 60,000 litres of milk daily – roughly one third of total production. To date, it has increased tenfold, with the proportion ranging between 70 and 80%. The aim is to utilise and sell the entire amount and every constituent element of milk. Since 2005, an investment of roughly HUF 9 billion has been made into the plant, including the construction of the logistical warehouse, expanded capacity as a result of purchasing new filling and packaging machines, and production of a full range of fresh products (for example butter, yogurts, sour cream, etc.). Sour cream, as an indispensable part of many national dishes, is a particularly important product for Hungarian consumers. Since 2012, their net sales revenues have grown yearly by 20 to 25%, and is expected to reach nearly HUF 52 billion in 2017.

Since its launch, the company has increased its equity by several orders of magnitude. According to Mélykuti, this is the secret behind their cohesion and success. It was the only way to implement the investments, as the state guarantee stipulated that the members must provide the company’s own contribution for loans, EU and other subsidies in the form of a capital increase. On the first occasion, in 2005, 104 members of a membership already numbering 160 contributed a capital payment of HUF 500 million. “Members include partnerships as well as small producers and self-employeds: some bring in 700 litres a day, others, 70,000”, says the CEO, who produces 4.3 million litres a year. “I cannot overemphasise the importance of the know-how and hard work of our top managers for our success”, he notes. Overall, the company’s employees are highly appreciated and fluctuation is prevented by means of above-average wages and loyalty bonuses. The Székesfehérvár factory has 506 employees, while the Debrecen plant purchased from FrieslandCampina in 2015 has a staff of 120.

Thanks to continuous improvements, lactose-free milk is also produced using state-of-the-art technology whereby milk is injected with the lactase enzyme after heat treatment, ensuring that the taste and texture remain the same. According to Tibor Mélykuti, the unique value of their products lies in the owners guaranteeing the high quality of the ingredients. The plant produces fresh and UHT products for the house brands of a number of retail chains. It is partner to most of these chains, but this currently only accounts for 35% of production. Half of the remaining 65% comes from the Magyar brand, launched in 2010, followed by Riska, available since 2012-2013, and in an even smaller share by Alföldi, which has been on the market since 2007. It also produces unique brands specific to a given chain such as the Mesés products for CBA, Anni-Panni for Coop or the Kokárda products for Aldi. “This concept also gives us a competitive advantage, helping consumers pick the product that they like off the shelf”, says the CEO.

Based on a case-specific government decision, they received a state subsidy of HUF 4.8 billion to support their major investment of HUF 12 billion to be implemented over the next two years. “The expansion of the Debrecen facility with its new cheese producing and pulverising section with a capacity of 7500 to 8000 tons, put it on a par with the biggest Hungarian dairy processors”, explains Tibor Mélykuti. The two plants cover 17 counties, and already account for one quarter of the country’s total milk production. On a daily basis, the Debrecen plant processes 350,000 litres of whey into a high-quality product which is sold as whey powder and desalted whey powder, for example on the international market as an ingredient for infant formula.

Mélykuti’s top priority is to set up a common procurement system. As he explains, the average fat content of milk in Hungary is 3.5%, but in Finland for example, it is 4.3%. “Building up the animal feed system would allow us to gain higher purchasing prices and 20% savings on costs, and would also ensure higher nutrient content values in Hungary as well”, he adds.

Also serving as chairman of the Milk Product Board since 2014, the CEO supports the smaller, artisan businesses of members to help boost the consumption of dairy products in Hungary as well as provide a broader selection.