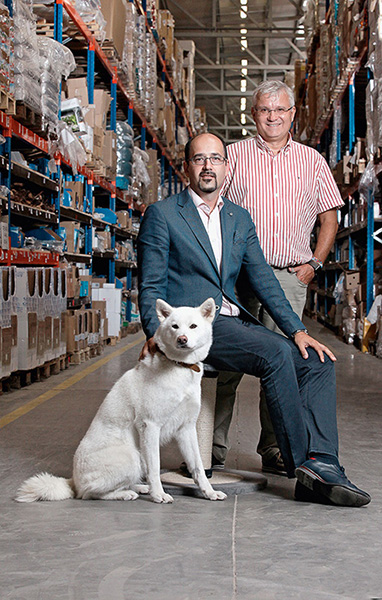 Versatile market leader Already in 2010, a survey by Hungarian financial weekly HVG named Alpha-Vet Animal Health Ltd. as one of the top 100 most productive Hungarian service providers. Currently, Alpha Investment Holding LLC., of which Alpha-Vet Animal Health Ltd. is a member, is a market leader in Hungary in the manufacture and distribution of veterinary medications and animal feed.

Veterinarian Attila Móré – owner of Alpha Investment Holding LLC., which in turn owns Alpha-Vet Animal Health Ltd. – built up this stable, autonomous multi-billion forint company group from virtually from the ground up over a period of many years. The story all began by him applying for the position of manager of the University of Veterinary Science’s Practice Clinic. In practice, this is an institution in the town of Székesfehérvár which is Hungary’s largest animal hospital with its 1500 square meters. At the time, it was suffering from financial difficulties. Attila Móré purchased it in 1993. This purchase set the company and its owner on the road to success, and was also motivated by the fact that the hospital was unable to sustain itself by providing care alone. Attila Móré, however, had the idea to look for other sources of funding, which included the trade in veterinary medications. A change in law enabled veterinarians who lost their jobs as a result of the dissolution of agricultural cooperatives to move into this sector. Attila Móré took advantage of this opportunity.

“In 1996, the company name was changed to Alpha-Vet”, says managing director József Málits. Meanwhile, the veterinary hospital, open 24/7 and only treating household pets, generates less than one percent of revenues. The remaining 99% plus comes from the other activities of the company group. “In addition to providing veterinary care, the holding is also involved in two key sectors”, explains the manager. One is the development of and trade in veterinary medications – in addition to the company’s own products, it also distributes under exclusive distribution licenses products from some of the world’s largest veterinary pharmaceutical companies – and the other is the retail and wholesale of animal feed and equipment (with over 30,000 products). Distribution of veterinary pharmaceuticals accounts for nearly 60% of revenues, while the remainder is generated by the sales of feed and equipment. “Alpha-Vet is the only company on the market with a retail chain and its own shops. It supplies pet shops, operates an online store, and is building a franchise system in the animal feed and equipment sector”, notes József Málits.

This dynamic growth required expansion, as well as an increase in warehousing facilities and logistics capacities. Alpha-Vet’s centres are located in Budapest, Debrecen, Sárvár, Székesfehérvár and Szombathely. They offer exemplary and outstanding service: any orders placed by 5 PM are received by the client the next day. However, the sector is often affected by epidemics and natural disasters, or tough market conditions, making life difficult for its partners operating in this sector. Alpha-Vet often supports good producers by allowing them to pay for products only much later.

Alpha Holding owns three manufacturing plants for pharmaceutical products, the feed supplement and plant nutrient solution sector. It produces its veterinary pharmaceutical products in Bábolna. The plant and the licence of the products manufactured there were transferred to Alpha Holding in 2010 and 2014 through a purchase and investments. This transaction was only the first step, as, with subsidies from the Hungarian state and the European Union, Alpha-Vet also modernised and expanded its Bábolna plant. In addition, they also began developing and modernising products. Though approvals involve a lengthy procedure, the company already has originator goods which have been approved for distribution in 8-14 EU countries. Nor does it shy away from more distant markets: one of its products is currently undergoing approval in Dubai and in Pakistan. Among the plant nutrient solutions, the products to stimulate the defence systems of plants are relatively new, they were only launched last year and this year – first in Hungary and then on the international market. Their bio-chelates, applied to the leaves, can be used to supplement micro- and macroelements in a wide range of plants such as grapes, fruit trees, cereals, and root crops.

Alpha-Vet collaborates with several universities including Semmelweis University, Szent István University, Pannon University, and the University of West Hungary, and also offers a scholarship program. Its employees are specially trained for their tasks and highly appreciated. The total value of the company’s completed and ongoing product development investments will soon exceed HUF 3 billion.

In addition to the European Union subsidies, Alpha-Vet is also providing an own contribution of HUF 1.5 billion from its own resources. As no rapid growth in the volume of livestock is anticipated in Hungary, both Attila Móré and József Málits see the expansion of their currently small exports as a key to the company’s growth, rather than selling to the increasingly saturated Hungarian market.

Including foundations, Alpha Investment Holding LLC. encompasses 33 legally autonomous companies. Another aspect of the story – and one which testifies to the owner’s foresight – is that separate companies have been created not only for the basic activities, but also for the additional services, from marketing to logistics. They are active FBN-H members, working on solutions with regards to intergenerational succession. At the same time, the current network structure allows for the group to either be sold or listed on the stock market without any particular difficulties. However, there are no such plans for the moment.