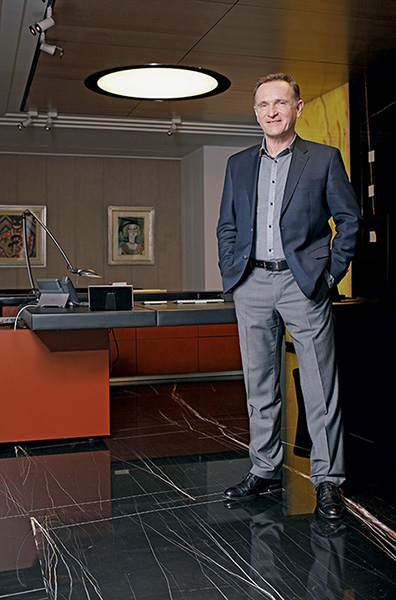 BILK Logistics Ltd. (Budapest Intermodal Logistics Centre – BILK) is only one of many concerns that testify to the success of György Wáberer. Striving for the optimal usage of resources for all of his companies is a sure sign of his entrepreneurial spirit.

Fifteen years ago, György Wáberer responded to the Hungarian Railways’ call for offers for a partner in building an intermodal terminal, which resulted in a cooperation between the two parties. The railway container terminal and the warehousing units of BILK Logistics Ltd. complement each other nicely in an area of nearly one hundred hectares – once just agricultural land. Modern, tall warehouses with storage units that can be stocked to nearly 12 metres high replaced the previous mostly one-storey warehousing facilities within the city.

“This opportunity comes at a good time, as the time is ripe for Hungary to also have the types of warehousing solutions and high-quality services used in Western Europe”, says György Wáberer. “Hungary is optimally situated within Europe, making it cost-effective to ship goods from here to the neighbouring countries of Austria, Slovakia and Romania. Several of our partners maintain a regional base here”, he explains. The BILK Logistics Centre is located in the southern part of Budapest, in the 23rd district within the area delimited by the Ócsai út section of the M0 motorway and the Budapest-Kelebia railway.

It is close to the intersection of all major international transit routes, and has its own exit from the M0 motorway. In addition to optimal public road and direct rail access, connections to waterway and air routes are also available within 15 kilometres (the Csepel Freeport and the Liszt Ferenc airport). In addition, the city centre can also be reached directly, including by public transport. A railway terminal and a container terminal occupies 10% and 20% of the land, respectively, while the remaining 70% is used by BILK Logistics Ltd.’s real estate development. “The warehousing units with a total surface area of 200,000 square metres have been built continuously to suit the increase in demand, operating at about 98% of their total capacity at all times”, says György Wáberer, explaining one of his business models for the use of real estate. This means the equipment and dimensions of their warehouse buildings are determined by their tenants’ requirements. Their first partner, Schenker, stayed for nearly ten years.

They often create long-term business relationships through intermediaries. As he points out, they always have to offer the very best, even if they are not directly negotiating with a client. “If we provide the same thing as the competition, we can win over the client by offering better prices.” The company operated at a profit even during the crisis, and the unfavourable economic climate was scarcely reflected in its bottom line. It provides its owners with stable revenue and a solid base for future investments.

Steadily low interest rates should be taken advantage of, Credit plays a role in all of the company’s concerns. Freeport of Budapest Logistics Ltd.

After 22 years, the businessman sold his share in Waberer’s International, giving up management of 6500 employees and day-to-day operational decision making. Today, he works with about thirty people directly within his businesses managed on a daily basis. Compared to the life he lead earlier, this is more relaxed, and, as he admits, he is able to rely on many more skilled professionals. He believes that the involvement of staff in decision-making is the secret of any successful company. In addition to logistics, he, along with his children, has also entered the office building business in order to diversify his business interests.

In addition to MOM Park, he is also working on setting up a 22,000 square meter energy efficient office complex. Another one of his ongoing projects is the construction of luxury flats on the site of the former SZOT vacation complex in Rózsadomb. Market Zrt. has already begun construction works. György Wáberer’s office in Kossuth Square won the “Office of the Year” award in 2015, which means he has some idea what the flats to be completed over a two-year period should look like. As he says, his life still holds challenges: new, much more carefully considered decisions have to be made in connection with both warehouse and office buildings, as well as in the luxury flat business. “I feel like a rookie in these fields”, he smiles. “Since I always strive to create the very best, ask me again in another 22 years.”