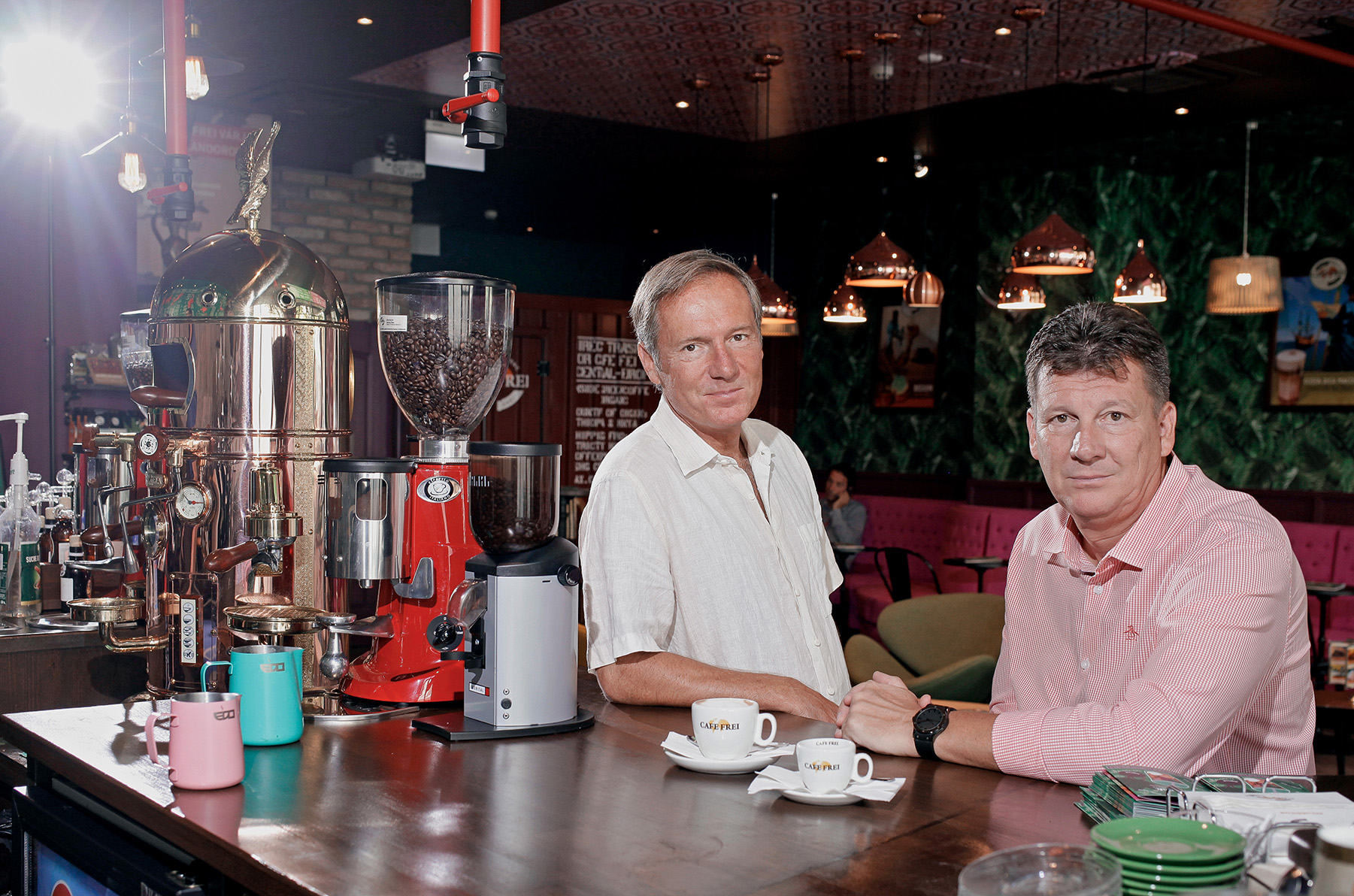 Already considered a market leader in its field, Cafe Frei is gradually beginning to gain a foothold on the international market as well, as it is now present not only in France, Austria and England, but in Dubai as well.

Tamás Frei was always struck by the diversity of the coffee culture he encountered during his travels around the world. In the middle of the desert, he sampled a Bedouin specialty which has to be simmered for three hours, while in Japan, he encountered the drip process, with which it can take five hours to prepare the local varieties. In the course of his travels, however, he also discovered a surprising fact: the Italian “coffee kitchen” is a standard at virtually all cafés around the world. The reason is simple – cappuccino, espresso and other well-known Italian coffees can be prepared in minutes, and when a person’s daily caffeine dose is at stake, time is of the essence.

When Tamás Frei and his business partner Tamás Langár decided to launch their own café chain with a wide variety of coffees, they knew that they would have to tackle two difficult challenges. On the one hand, as no one wants to stand around waiting for hours for their cup of joe, they would have to come up with processes whereby even exotic drinks from other coffee kitchens, ones that were gradually disappearing into oblivion, could also be made quickly and thus brought back to life. On the other hand, they would have to set up a then unparalleled supply chain, as they required ingredients that others did not need for traditional Italian coffees.

They also wanted to break with the comfortable Hungarian tradition of merely being resellers in the system, whereby Austrian, Italian, German or other Western European experts would be choosing the coffee plantations instead of them, and all of the steps from roasting to packaging would be performed in Western Europe, for Western wages.

As Hungarian restaurateurs generally order ingredients from the wealthier part of the old continent (the “first world” – even though coffee is produced in the “third world”), the prices are quite steep: a cup of espresso is significantly more expensive in Budapest than it is in Naples.

This is why Cafe Frei buys directly from producers, and wherever possible, they produce locally. For example, at the outset, they bought some of their cakes in France, but now they make all of their desserts in Hungary.

They opened their first establishment in the Hungarian town of Salgótarján ten years ago. Since then, they have opened 16 cafés in Budapest, most of which are fully owned by them, while their 17 coffee shops in the countryside are operated on a franchising basis. They strive to broaden the horizons of their clientele by printing a menu magazine about coffee culture – its 54th edition has already been released.

Cafe Frei itself is actually a group of three companies. Cafe Frei Kft. is in charge of producing ingredients and trade, Cafe Frei Central Europe operates the coffee shops and manages the franchise system, while Cafe Frei Licensing is the holder of the IP rights and the trademark.

Naturally – since the network already covers all of Hungary –, the owners cannot be present everywhere. In order to be able to guarantee the same quality at each location, they have developed a full-fledged “mystery shopper” system. No one working in a Cafe Frei coffee shop can ever be sure if the person they are serving is an ordinary customer or a secret “paid” shopper who is carefully evaluating every aspect of the quality and the process. This system was complicated by the fact that the mystery shoppers had to be trained as well: as “inspectors”, they also have to check whether the barista followed the specified recipe.

The company is now focusing on international expansion: for example, it has pilot projects in France, Dubai and Great Britain. In these countries, it has to adapt to completely different expectations: in France, for example, food is what matters the most, as customers primarily choose a café on the basis of whether it serves a good lunch. On the other hand, in England, a coffee shop should also offer beer or tea in the afternoon hours. The ownership ratio of their international branches varies: in some places the Hungarian owners only hold 5%, in others 50%.

Besides expansion, what does the future hold in store? The founders would like to see the company eventually be able to stand on its own feet without them.