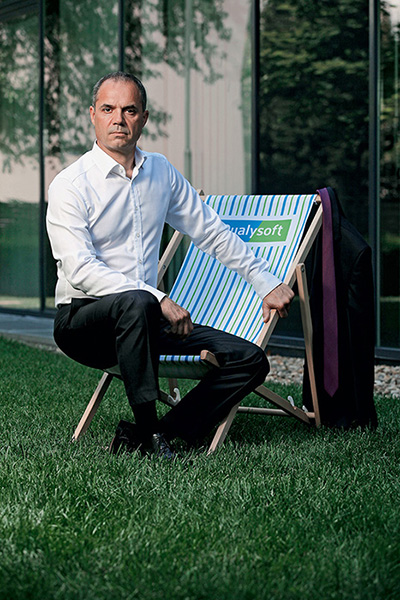 The founders of Qualysoft first built their professional reputation and contacts in Germany and Austria, and then started expanding back in their homeland, Hungary. The business model has worked: today, the group employs nearly 500 people, and anticipate a total turnover of about HUF 9 billion for 2017.

The classic expansion model is simple: an increasingly successful company in Hungary starts expanding first into neighbouring countries, then into the German-speaking countries or new markets further away. In the case of Qualysoft, it was exactly the other way round. The two founders, now both aged over 50, left Hungary before the regime change. They worked for nearly a decade and a half in Germany and Austria, and set up their own company in Vienna. According to Tamás Simon’s account, he and his business partner Róbert Mayer left Hungary in 1987 as delegates of the legendary IT Research Institute (SZKI). The knowledge they had gained in one year at SZKI was so up-to-date and current that they were flooded with programming jobs abroad and ended up staying there.

They only returned to Hungary because Tamás’ wife talked him into it – she wanted their adolescent and pre-adolescent sons to attend high school back home. Tamás is still grateful to his wife, as building up the company in Hungary has progressed much faster and more spectacularly than they had expected. Founded in 1999 and specialised in software development, Qualysoft started out with only a secretary working with Tamás and Róbert, by the next year, however, it already employed 35 people. It has now grown into a medium-sized company with an active presence in seven countries, a staff of nearly 500 people, an expected revenue of nearly HUF 9 billion and an operating profit of HUF 400 million at group level.

So far, they followed a relatively straightforward path, as their model was well thought out. Tamás and Róbert primarily had clients from Austria and Germany, and hired software engineers for projects for hourly wages below western ones but much higher than Hungarian ones, making it a win-win for everyone. What set them apart even in the beginning nearly two decades ago was that they placed a particular emphasis on recruitment – online, at that. It was from this project that the company ITJobs, now completely independent from Qualysoft, was created.

External markets have a different meaning in the case of Qualysoft, given that Austria and Germany are virtually domestic markets for the company. Their German, Austrian, and now Swiss clients are served by their local companies, while the region is supplied from Budapest. However, the company group that has grown big in Hungary derives only about half of its revenues from the “old country”. They first expanded into Serbia upon receiving a big contract there from US Steel, the American steel industry giant, then into Romania, and later into Slovakia and Ukraine as they followed their major clients – mostly Austrian – such as banks and insurers who were expanding into the region.

Since then, they also did business in Albania for a while, introducing an electronic tax filing system for individuals and companies under a government contract. “The Polish competition is very strong, both financially and professionally, so expansion there is limited. There are still opportunities in Asia, despite the fact that for a while, India seemed to be taking over the entire service provider sector”, explains Tamás Simon. The struggle is especially difficult, for even though the 300-strong Qualysoft in Hungary could hire another 100 software engineers right this moment, there are not enough applicants.

Getting back to the subject of strategy: their target market is the German-speaking countries. Two years ago, they purchased a beleaguered Vienna-based company that distributed CRM (customer relationship management) software, thus strengthening their presence on the German-speaking markets, especially in Switzerland. “We would need more capital if we were to buy more companies, but we are cautious with that”, adds Tamás Simon. At the same time, he recognises that it would be easier to take up the challenge against the Polish competition if they had more capital. In addition to the Asian markets, Qualysoft believes in the Germany Industry 4.0 strategy, the country’s intensive digitalisation processes, and of course in the legendary strong, local, mostly family-owned mid-sized businesses. Fortunately enough, they have grown into one – at least by Hungarian standards. This means that their long-term plans may include going public, perhaps to allow Tamás Simon more time for his hobby, Prana Vashya yoga, which he has been practicing in India for a long time and which he even teaches here in Hungary from time to time.