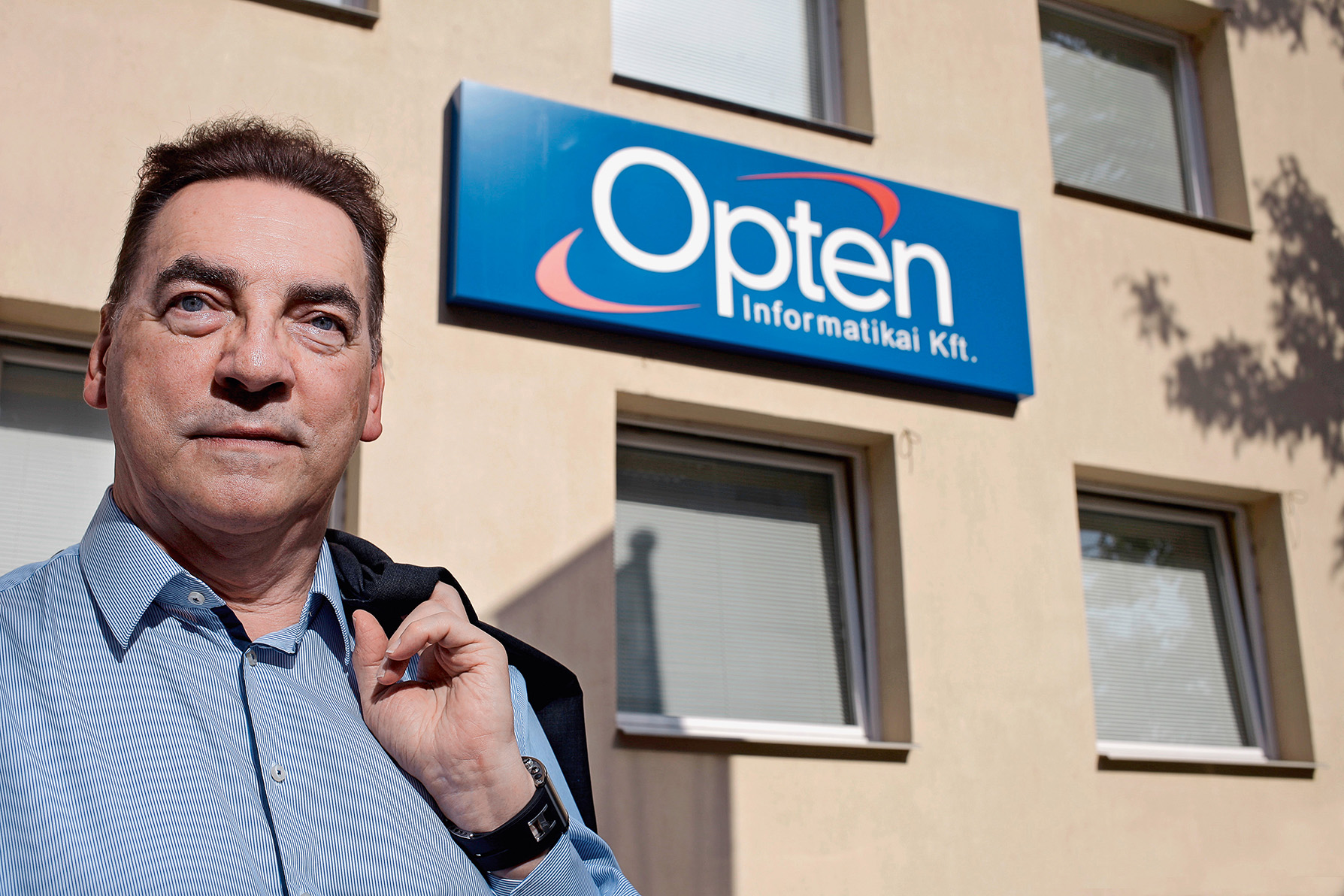 Instead of a multinational company, the foreign-sounding name belongs – for over a quarter of a century now – to a solid mid-sized business. The name is a combination of the words “optimisation” and “energetics”. But it would be not completely unreasonable to ask why, given that most economic actors know Opten as an IT company providing company information services. The answer lies in the fact that in the company’s early days, physicist Tamás Tóth and his father, a civil engineer, provided energy conservation consultancy to companies for a success fee. Of course this was after the regime change when Tamás Tóth, who had up until then been working at a technical research institution and the Technical University, realised that in addition to being often overlooked, his work as a researcher was not exactly optimal in terms of earning a living, either. After quantum mechanics, he plunged into a true adventure: business. The small partnership that was founded in 1990 had great difficulty hauling in their first clients, despite developing a unique hardware to help reduce the energy consumption of manufacturers. Though their method worked, there was more demand for programming at the time, so this became their main source of revenue.

At the request of one of their clients, the company founder programmed a solution for displaying a list of companies under winding up in a searchable form. This was tremendously valuable in the unpredictable years after 1989, when state companies, their various legal successors, as well as a plethora of private companies ended up insolvent. At the time, these lists were only available on paper, in legal gazettes, which made it a lot of hard work to do a background check on a new partner. Even so, even major companies were often tricked into selling goods or services on credit to a company that was already facing bankruptcy or liquidation proceedings. At first of course, the company “headquarters” were housed in the living room of the housing estate flat, and lists available on floppy disks were updated manually. But there was effective demand, and they soon came up with a programme which automatically compared a company’s list of partners with the list of companies that have filed for bankruptcy. The breakthrough came when they came across a “smart-talking” insurance agent whom they hired to organise their sales. Of course Tamás Tóth’s wife (an art restorer by profession) helped out from the very beginnings, and they survived on her earnings for the first few years.

As neither of them had any management experience, they had to struggle with the challenges of building a company over the next few years. Although they had less than two dozen employees before the turn of the millennium, today over one hundred people work for the company. Leading people is not easy, and Tamás Tóth underlines that behind every success story, there is a talented and persevering team. In the same way, the owners of Opten Kft. never would have come this far in building their company if they had only had themselves to rely on. On the other hand, for many years they reinvested every last penny into their company. They even stayed in their housing estate flat for a long time and kept their old car for years. They only took out modest bank loans, and to this day, never had the need for external capital or bringing in co-owners. In the coming years though, they may consider an acquisition which would end up requiring external funding.

The company’s history has been beset with changes, and they have recently become more open to larger transactions. This year for example, they took a division that dealt with the publication of legal materials, set it up as an autonomous company, and sold it.

But getting back to the company’s history: by the turn of the millennium, after processing the entire company database, they started to offer their client companies and institutions lists of companies and company information services on CDs, and they also launched their online system around this time. Later on, they upgraded to DVDs, then to a solution mapping unique corporate networks, and the analysis of these connections. The latter was another invention and a novelty on the Hungarian market (which even won the Invitel InnoMax award).

Essentially, it is able to indicate, by means of certain behavioural analysis, how the relationships between companies, cross ownership and changes in top executives can increase the risk of a company’s operations. Though it is based on the scoring systems used in the banking sector, the development of the entire company information system and its optimisation for the Hungarian market was a result of Opten’s own intensive R&D work.

Their latest course of action includes the development of mobile applications and increasingly fulfilling individual orders for large-scale corporations with several thousand partner companies. In fact, by analysing their huge corporate clientele, they can also tell a major service provider which companies could be potential customers. For every Hungarian company, they can calculate the likelihood of becoming a client, the revenue that can be expected from them (client value), and can even come up with proposals for launch products for them.

These analyses are made on the basis of company data (profile, headcount, size, and changes in these), financial figures, and the details of managers and owners (age, address, family members and companies involved) using various statistical methods (data mining and big data). Today, this segment accounts for only about one-tenth of their revenues, as they are supplying an entire country (as well as several international partners) with company information, though it may grow significantly in the future.

According to Tamás Tóth, one of the main pillars of success is a company’s need for continuous change. “Success makes you take things for granted and covers up existing issues and tensions”, he claims, which means efficiency needs to be improved regularly, especially in an IT company. At the same time, the family background of the company, provided together with his co-owner and manager wife, ensures its continuity. In addition, Tamás’ daughter also works for the company and is in charge of marketing, but often also fills in for her father in his executive responsibilities.