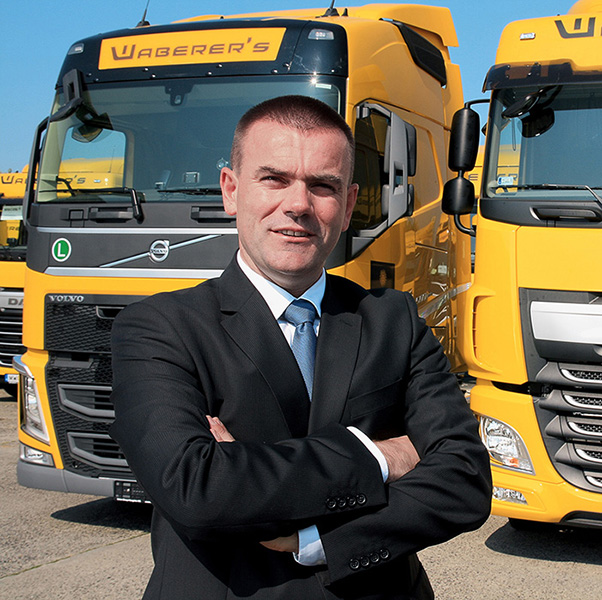 Waberer’s’ story is all about growth. “We take pride in having integrated intense growth into our corporate culture. We have always successfully combined organic growth from our own resources and expansion through acquisitions”, explains Ferenc Lajkó, CEO of Waberer’s International.

Over the past 4 years, the company has experienced an average growth rate of 15%, a remarkable achievement not only within the sector, but also by European standards, as it is 10 times higher than Europe’s GDP growth rate and four times higher than the growth rate of the freight transport industry. In 2004, at the time of Hungary’s accession to the EU, they benefited from the opening-up of the European market. The market offers practically infinite growth opportunities, and their customers increasingly prefer major players.

The growth of the Hungarian market also played a role in Waberer’s expansion. “We offer customers a products that is more competitive than our competitors’”, comments the CEO, and this is not only in terms of price. Their offers combine three or more optimised components including outstanding quality, competitive prices and a large, consistent capacity. This is what the companies they target require - for them, cheap but poor service is not an option. As Ferenc Lajkó puts it, “That’s why our business strategy is crisis-resistant - we were able to gain market share even in times of recession”.

Growth through acquisitions is also a crucial component of the company’s success. They have acquired several companies, including their most recent acquisition, Wáberer Hungária Biztosító Zrt. Expansion through acquisitions is facilitated by the fact that the European freight transport market is fragmented, with thousands of businesses of various sizes. Waberer’s typically targets mid-sized companies with roughly 300 to 400 trucks.

“For us, entering the stock exchange is crucial for financing our growth path, which is limited by the amount of cash we can generate”, adds the CEO. Over the medium and long term, the freight transportation sector allows for faster growth than could be financed from the company’s own resources. “We see our IPO as a huge accomplishment that was well worth the effort. There hasn’t been a stock exchange listing in Hungary comparable to ours for over 20 years, and we are immensely proud of it”, says Lajkó. As planned, they raised capital of EUR 50 million and used it promptly, closing the acquisition of the Polish freight transport company Link within two weeks of trading being launched. The CEO sees this as testament to investor confidence and credibility. “We believe this was also important for our investors: they can see that the management is committed and delivers on its promises.”

The acquisition of Link marks an important milestone in the company’s growth. Poland is the largest freight nation in Europe. Alhough Hungary and Romania are not far behind, freighting is much more of a national tradition in Poland. In Europe, sixty percent of long haul transport is provided by the recently-joined member states, with Poland leading the frontline.

"By purchasing Link, we’ve gained access to Polish industrial products and the Polish labour market”, explains Lajkó. The latter is nearly four times the size of Hungary’s. “Through Link we aim to consolidate the Polish freight transport sector and provide the best service in Western Europe by building a large fleet of up to thousands of trucks”, concludes the CEO.