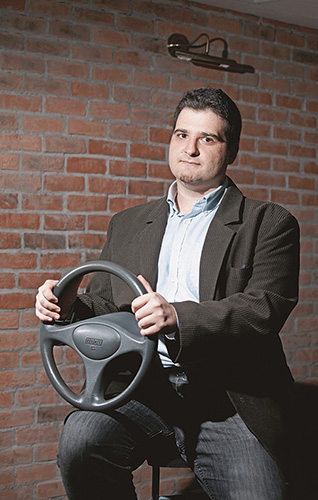 By the time this issue is published, a California-based investor from the Silicon Valley may have already been invested in Commsignia, a Hungarian company dealing with vehicular communication.

In mid-September, we made an interview with co-founder József Kovács, discussing the present and the future of the company established by young Hungarian engineers. We were lucky to have found a timeslot for this occasion, since József had already been busy commuting between Hungary and the United States in order to bring the ongoing negotiations to fruition.

The less than four-year-old enterprise specialised in vehicular communication is just about to take a huge leap forward: it may get close to the world’s coolest IT companies. To that end, they have already moved their seat to the West Coast, leaving only a couple of European branch ofﬁces behind. The re-domiciliation includes, however, more than an ofﬁce in California: apart from the Golden State, they are present in three US cities – including Detroit, the former capital of car production which is still regarded as a prominent centre of the industry. We are talking about all this in a Lónyay street ofﬁce, from where the outlook of the business really seems incredible.

József Kovács believes that car makers will, by no later than the end of this decade, completely adopt the technology further developed by Commsignia. The point is that the on-board communication system relying upon WIFI technology maintains a continuous connection to other vehicles as well as to the surrounding infrastructure, with the help of roadside communication nodes installed along the route. This way, the vehicle will be able to respond to unexpected events such as a vehicle approaching from sideways at a high speed or a trafﬁc congestion within the range of ﬁfty metres. Today, only industrial players can clearly foresee this, but in a couple of years’ time this technology will be a standard equipment in all vehicles – forecasts the co-owner of the company. The company also has a promising present: they already have customers in over 15 countries including noted car manufacturers and their suppliers.

The new investor is soon to arrive. Obviously, until business negotiations are underway, the identity of the investor shall remain undisclosed, but we have found out that these kinds of investors usually get involved in businesses with amounts between 1 and 8 million dollars.