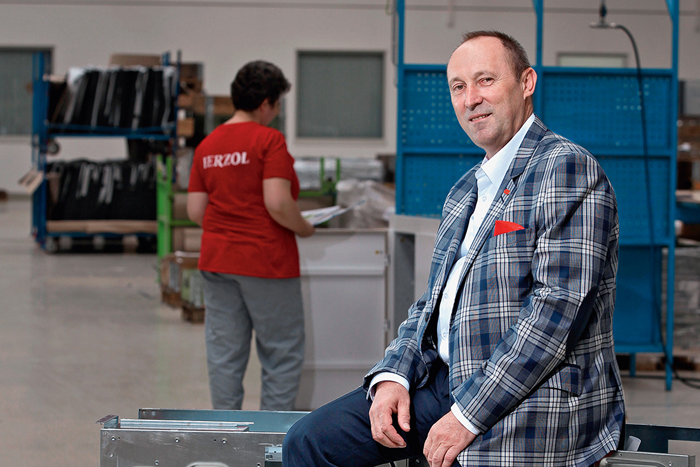 This metalworking enterprise that has been in business for 27 years started out at Tápiószőlős, in the garage of a home. At the time of the regime change in Hungary, Zoltán, the son of Ferenc Bíró, joined the company. Now Zoltán’s two daughters, both in their twenties, are continuing this three-generation family business.

This metalworking enterprise that has been in business for 27 years started out at Tápiószőlős, in the garage of a home. At the time of the regime change in Hungary, Zoltán, the son of Ferenc Bíró, joined the company. Now Zoltán’s two daughters, both in their twenties, are continuing this three-generation family business.

In recent years, Ferzol, a metalworking company that started out as a small business, has grown even stronger and more mature. The mid-sized enterprise’s revenue surpassed HUF 7.3 billion last year, and has more than 460 employees. Ferenc, the father of Zoltán Bíró, is still youthful at age 76, full of energy and unstoppable when a task is at hand. He has also raised his son to enjoy and respect work. Right after the regime change, he left the (then) small family business to Zoltán, who was about 20 years old at the time, for a few days, but left him with so much work that he would only be able to get it all done by working 10 to 12 hours a day. However, when the father got back from his business trip, everything was done. “That’s great, son, but who put 2,400 kilometres on the car?”

Thanks to his father’s watchful eye, Zoltán had been caught red-handed. He had made his friends do some of his work so that he would have some free time left – but on the other hand, it was a promising sign of his leadership qualities. He certainly needs them today, as the business that literally started from a garage is employing more and more people in Tápiószőlős and Szolnok, and last year, as we mentioned above, generated almost HUF 7.35 billion in revenue.

Ferenc Bíró started working as a car and machine repairman in 1975 as his second job at Tápiószőlős in his own garage, while his day job was teaching technical drawing, materials science, and practical training. As a teacher, he had more free time than most people, and also had tremendous amounts of energy. Along with repairing cars, they grew watermelons, sweet peppers, and fruit on two hectares, selling them at the farmer’s market, so they were no strangers to hard work. Along with all this, Ferenc Bíró traveled all over the country at the weekends, looking for promising pieces of machinery, thus increasing the capacity and facilities of his home workshop step by step.

As well, he convinced his son to study to enroll in a mechanical engineering training programme. He was furious when he found out that Zoltán planned to start working after graduating high school instead of attending the University of Technology. Therefore he sent his son to work in Budapest through an acquaintance. The young man had to get up at half past three every morning, arriving back home by six in the evening, and his father often added even more, asking his son to help out in the workshop from six until nine. At the weekends, things got a bit easier: he let his son sleep in until 7 or even 8 in the morning.

However, the boy rose to the challenge: in 1990, when it became possible to found a business in Hungary, he stayed at home, deciding to work for the family business. The business, named after the first three letters of the father’s and son’s name, slowly outgrew their workshop.

The little family start-up successfully weathered the difficult years that followed the regime change. “We used to go to Austria and Germany a lot, and we saw what was going on there, so we started to manufacture a number of things, selling them to car shops, companies, and wholesale distributors”, says Zoltán Bíró, recalling this golden age. For example, they were the first to manufacture the small ball valve for siphoning out fuel without having to put the tube into one’s mouth. Their artisanal methods were slowly replaced by more professional work. They used a HUF 3 million Start loan after the regime change to purchase their first lot at the edge of the village and to build their first major, 300 m2 industrial workshop. However, the others in the village were also shrewd people. For example, a few years later, there was a landowner who first asked for HUF 500,000 for his lot (worth about HUF 120,000), one million the next day, and two million when Zoltán went back for the third time. The boy learned that when he wanted to get something, he would have to act immediately without hesitating. Although he did end up buying the lot worth HUF 120,000 for 1.7 million, he learned from his experience, and in future deals did not visit sellers so often.

Of course, at this time, their yearly revenue was only half of the above-mentioned HUF 3 million loan. The brave step they had taken and the risky credit situation paid off however, and by 1994 Zoltán was attempting to sell to the nearby Electrolux factory. “They threw me out the door, but I climbed back in through the window. I was nagging purchasing agents for months. In the end, they gave us a test job that was almost impossible to do. Later I learned that they had even placed bets amongst themselves that we would not be successful. But we managed to do it, although we had to come up with a gas burner that even their Swedish suppliers had struggled with”, the manager recalls.

Before the turn of the millennium, they had a very broad range of activities and dozens of new buyers, but ultimately, metal and thin sheet working have remained their main area of concentration. Along with their CNC turning machines, additional works undertaken included pressing, bending, cutting, welding, surface treatment, and assembly. What set them apart in component manufacture was that they would accept jobs for small runs of 50-100 pieces, but also had the flexibility to produce series of tens of thousands of pieces.

First, they imported used machines from Germany, but in 2001, they finally managed to buy their first brand-new machine for HUF 16 million, 50% of which was financed by subsidies. Before that, they would work on the old machines at night to avoid interruptions in production, as jobs were pouring in. The business director they later employed was surprised that there was no need to push Ferzol’s services – clients were queuing up waiting for them.

Of course, there also were some hard times: In early 2009, they forecasted a 60 to 65% drop in sales, and were reluctantly forced to lay off 45 of their then 115 employees, promising to hire them back as soon as they had work for them again.

And he managed to make good on his promise in only half a year! How did they do it? While orders dropped significantly, there is always a need for spare parts. The company meanwhile “escaped forward”, spending all its reserves – down to the last forint – on investments, new factory halls, and machines. After a couple of months, when competitors were going bankrupt one after another, the big multinational customers reduced their dozens of suppliers to half a dozen each.

Ferzol was one of the lucky few to endure with all of their key customers. And with their intensive “escape forward” strategy, the company managed to find hall builders and other subcontractors at good prices, as builders were happy to find any work at all. They also managed to achieve a dramatic increase in efficiency.

Now of course, the situation has changed again; there is a great lack of not only builders, but also semi-skilled and skilled workers in Hungary. The company has so much work and so many orders that they could easily use at least another 50 employees in addition to their current staff of 460. They also feel the effects of the proximity of Budapest and Kecskemét (with the Daimler factory), which drain workers away. In the years of the recession, they built thousands of square metres of factory halls, and also succeeded in remaining the primary supplier of many of their original partners.

They started intensive automatisation six years ago, buying their first robots. Then, about three years ago, they launched a training programme and also improved workplace amenities considerably by building a modern canteen and a training hall. Increasing turnover was one of the reasons that motivated them to buy a new site at Szolnok, so that their employees who had been commuting 50 or 60 kilometres a day would have an easier time getting to work. Another benefit of the Szolnok site is that EU funds are more accessible there.

Zoltán Bíró believes that the future lies in digitalisation, automatisation, and the Industry 4.0 process, particularly as human resources are becoming more and more of an issue for them. For example, they recently posted a job offer for their new site, with an unusually high salary, but even so, there was only one – unqualified – applicant for the job.

According to the manager, another key to the future is that the new generation must be permitted to find their own way. His two daughters, aged 25 and 29, are a good example: they remind him of how things have changed and how young people see things differently.