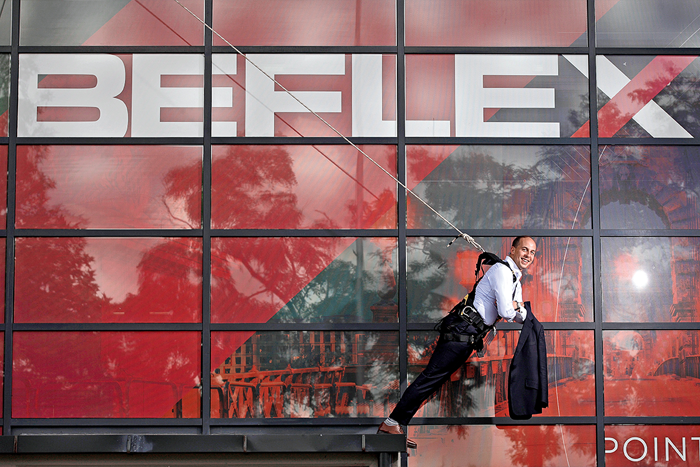 The young manager of Béflex, a manufacturer of illuminated advertising panels, modern shop equipment, roof advertising signs and huge digital printers for buildings and shopping malls, expects revenues of HUF 4 billion and at least double this year’s profit margin by the end of next year. Mr. László Bárán expects that by that time, half of the turnover will be generated abroad.

When you enter the reception area of the modern office building of Béflex Zrt., you can see the special letter-cutting machine which was still banned at the time of the political changes at the early 1990s and which thus had to be smuggled into the country part by part, through the communist customs control of the time. This machine was the start of everything that later laid down the foundations of today’s medium-sized business with revenues over HUF 3 billion.

That is to say, the story of Béflex – which now has hundreds of large clients, more than 110 employees, and a Budapest plant meeting all European standards – started in a small room in the 11th District of Budapest.

“It was my parents who started the business by asking my aunt in America to buy us one of these machines, which was not that large, but was still regarded as a miracle in Hungary. Back then, company names and logos were hand-painted with paintbrushes, a process that took long hours. Meanwhile, this machine (which was on the COCOM List), could automatically cut 30-metre letters within the same time it took to make 2-metre ones”, shares László Bárán. He took over the management of this family business, which had seen both successes and crises in the past, three years ago.

The spectacular efficiency of this automatic equipment had an effect on their results as well. One or two years after founding the company, they started to take orders from more and more companies, including larger ones as well. They first manufactured letters, logos, indoor and outdoor corporate image elements, and later went on to manufacture technical and customised shop furnishings. This made them market leader in a short time, their turnover increased above HUF 1 billion, a dream threshold, still before the millennium, a feat which obviously required the incredibly hard work of the parents (József László Bárán and Ildikó Kolek) of the current manager.

During 2009-2010, Béflex Zrt. also felt the crisis; their response was to cut marketing costs, which reduced their annual turnover between HUF 3.6 and 3.8 billion. The young László Bárán first had various engineering projects to coordinate, then he became a consultant of the new management, finally, in 2015 (although he was only 29 at the time) he took over the management of Béflex Zrt, which had been transformed into a single company from the previous holding. They had already passed through many major changes by then. Their greatest shock was in 2013 when they lost their largest client, Tesco, which had been responsible for one-third of their revenues until then. Their revenues dropped to below HUF 2.5 billion.

Since then however, the company has returned to a path of growth and development. Last year, their income totalled HUF 3.3 billion, and what is more important: nearly 49% of it was generated abroad, mainly in Western Europe. Today, the company does much more than cutting letters or making digital prints. Béflex has three business units with quite different profiles: graphical projects (design and manufacturing of outdoor building billboards or banners for international events such as the Fina World Championships), signage (lighting equipment and other engineering solutions) and furniture display. The latter means the special, unique, futuristic furnishings designed with the relevant brands’ colours (such as the Scitec Nutrition shops, the reception area of the Coca-Cola Office Building or the customised client service desks of telecommunication companies).

None of the Hungarian competitors offers services of such complexity in this market segment. Mr. Bárán describes the company as a one-stop-shop, meaning that what they are good at is at providing all the services in one place. This can greatly simplify the lives of customers, because they do not have to be in contact with a lot of people and coordinate the work, as the staff of Béflex can offer them multi-layered solutions. This is despite the diversity of the different areas: the lead times of the furniture business unit are in months, the signage business unit works within weeks, while the printing business unit delivers in mere days. Even project management must have different strengths in the different areas. László Bárán sees the creation of a company culture in which employees can and want to make decisions and take responsibilities based on quick and network-based knowledge sharing as a major project for the next years. He believes that this is the key to responding flexibly and effectively to the rapidly changing market.

But back to finances: their plans are ambitious indeed, as the manager wants to have a turnover of HUF 4 billion by the end of 2019 and improve the EBITDA on turnover from the current 3% to between 6 and 8%. They may well succeed, because they can reach higher profit margins on international orders. The founder’s son has proved to be very adept at improving export sales: the ratio of export sales, 25% a few years ago, is now above 45% – unprecedented in the history of Béflex Zrt.

The strong indicators also mean that the company could be ready to go public or involve funds from private investors in two or three years. They are currently taking part in the ELITE Programme of the Budapest Stock Exchange, where they have gained a lot of knowledge in the field of company organisation and made many valuable relationships. One of the results of this is that Béflex is revving up its digitalisation. What they have in mind is not only the purchase of an industrial scale 3D printer, but also to take their daily processes to a new level of digitalisation. In addition to the existing ERP system, they are implementing Salesforce, a cutting-edge solution package for client management, but they integrate this mindset in many other fields as well. In addition to their organic development, the group also has other development plans. The only external capital they use in these projects is bank credit, but if the conditions are met, they could also involve external investors to speed up growth and the implementation of their strategy.