What new opportunities does Xtend afford in comparison with the already functioning stock exchange? - Bet site

Xtend, a multilateral trading facility (MTF) created and operated by the BSE, provides companies with a facilitated form of listing on the capital market, with lower fees, easier conditions and special support instruments. In this way, it allows businesses to become gradually used to the obligations and transparency that accompany a presence on the stock exchange.

By opening Xtend, the BSE is mapping out a development path for issuers that allows them to ease into capital market operation. Issuers first encounter public presence via BSE Xtend, and can then progress to the regulated market categories.

Companies may list their shares on BSE Xtend without prior public transaction, in order to become used to stock exchange transparency and to learn how to fulfil the disclosure obligations set out by the Capital Market Act and the BSE. Xtend, which operates under looser conditions, is also an ideal choice for businesses that privately raise capital prior to going public, and list their shares on BSE Xtend after raising equity. This form of going public is called technical listing.

Companies that are mature enough for the stock exchange are eligible for the Standard Category, where issuers and the series of securities to be listed shall comply with certain requirements (size of the series, free float, completed business years, etc.). Companies that are not yet ready to be listed on a regulated market or have no plans to make an initial public offering can use BSE Xtend as a point of entry then progress to the Standard Category after one or two years spent here.

The Premium Category is the ‘highest’ category on BSE. This includes the shares of blue-chip companies, i.e. the shares of high-turnover corporations such as OTP, MOL, Richter and Magyar Telekom. Being included in the Premium Category requires meeting strict entry criteria as well as the execution of an initial public offering (IPO), and remaining in the category is also subject to maintaining pre-determined liquidity and size indicators.

How BSE Xtend differs from the stock exchange?

SME markets similar to Xtend are called multilateral trading facilities (MTFs) by international regulation. These markets differ from traditional stock exchanges (so-called regulated markets) in their level of regulation, as in terms of functionality they offer issuers and investors the same. This includes the benefits provided by public operation or the opportunities for raising funds on the stock exchange, as these are also available on BSE Xtend. As mentioned above, companies that opt for BSE Xtend have an additional opportunity compared to the BSE’s regularly markets in that they can float their stocks after raising private capital without an actual IPO, by way of a so-called technical listing.

In the legal sense, therefore, BSE Xtend is a multilateral trading facility operated by the BSE. Supervision of the market is divided between the BSE and the MNB. The market’s regulatory framework is set up by the BSE. The verification and the determination of the content of the information document required for listing (with a total issue value of under EUR 5 million) is also the task of the BSE.

To what extent does this make things easier for companies?

The regulation of BSE Xtend has been set up in a way that conforms with the market. There are a number of loosened conditions in effect for companies: while drawing up financial reports in accordance with IFRS standards is compulsory in the regulated market, financial reports prepared in line with Hungarian accounting standards are accepted on BSE Xtend. Another easing related to accounting and auditing is that BSE Xtend does not require the issuer’s auditor to hold an issuer qualification while the regulated market does.

How will investors be protected?

As is the case at the international level, medium-sized companies with considerable growth potential carry a risk in Hungary as well, which is the price paid for the fact that the yields available through such investments are typically higher. On account of the looser conditions provided to issuers and the low size limit, BSE Xtend may be considered to be less secure than the BSE’s regulated markets, despite the increased investor protection. For smaller companies, the implementation of business plans requires greater resources than for their larger counterparts, and in the majority of cases they also have less influence in their own markets.

In the interest of reducing investor risks, companies must go through a double filter in order to list their shares on BSE Xtend and are also under dual supervision during their stock exchange presence.

The first filter is the so-called Nominated Adviser, which assesses whether the given company is suitable to be listed on a public market and whether it will enter into a contract with it to provide consultancy and support for market listing and continued trading. The second filter is the BSE itself. As market operator, it is the BSE’s task to approve the issuer’s admission document (the so-called information document), and to verify compliance with its disclosure obligations during market operation. Above a total issue value of EUR 5 million, the admission document of the issuer is reviewed by the financial supervisory authority (MNB).

As mentioned above, after the company has floated its shares on BSE Xtend, it is monitored by the so-called Nominated Adviser, and in addition it also falls under the supervision of the BSE and the supervisory authority (MNB) in accordance with the following: 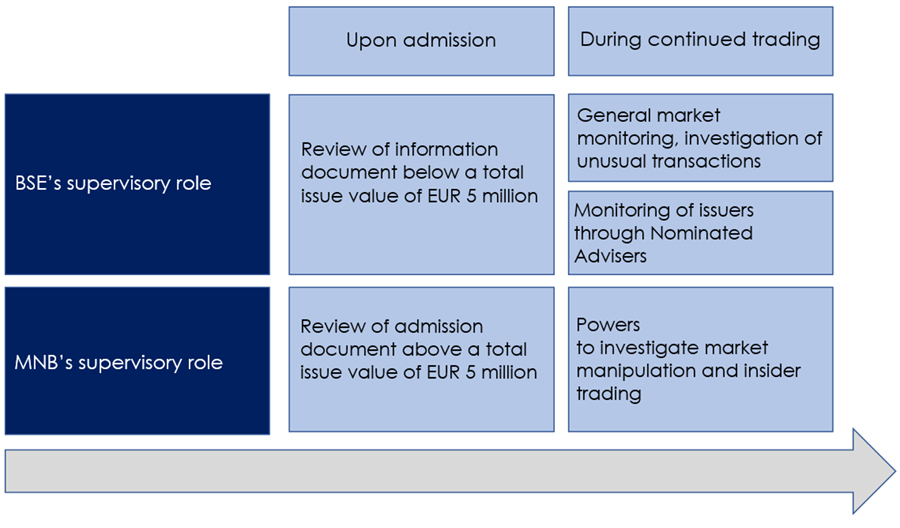 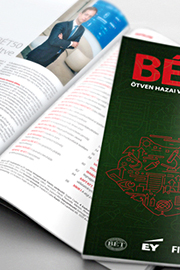