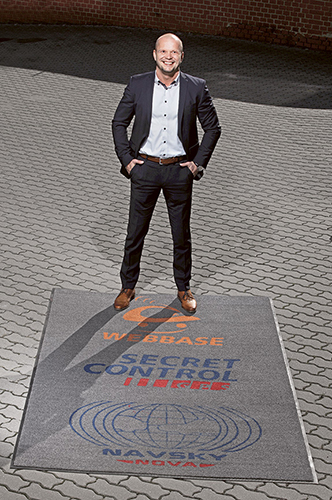 When starting university, little did the Varga brothers know that they chose all the right combination of education. Zoltán graduated as an electrical engineer, while László earned a degree in traffic engineering. Their company, Secret Control Kft., in which they have equal stakes of 50 percent, has been operating successfully for 20 years now. Most interestingly, the business highly relies on what the brothers learnt at school.

The company’s core activities include vehicle protection and fleet tracking. Cars are monitored via GPS which makes it possible to immediately notify the company’s dispatcher whenever a thief attempts to steal the vehicle. Upon receipt of such a warning signal, the company calls the police and provides comprehensive assistance service until the car is recovered. At the moment, the system is operating in as many as 6,000 highly valuable vehicles, combatting around a hundred attempted car thefts per year. Stolen cars are recovered to the owner in each and every case.

Another division is fleet tracking: 55 thousand vehicles are involved in this activity both domestically as well as through their foreign subsidiaries. The market-leading Secret Control monitors a whole bunch of things, such as fuel consumption, temperature in refrigerated lorries, prevailing circumstances and conditions of livestock during live animal transport, and even the driver’s personal driving style. The goal is – among others – to increase efficiency, reduce costs as well as to ensure and scrutinise compliance with legal regulations. The company serves almost all large enterprises. Their key accounts include the Hungarian railways (MÁV), the Hungarian postal service (Magyar Posta), the Hungarian oil company (MOL), a large public utility company (Elmű), several banks and the domestic division of a forwarding and transportation company, Waberer’s. The key to the well-oiled operation of fleet tracking lies in their national network. ‘We are ready to equip vehicles and rectify possible defects within 24 hours, even in the smallest village,’ says János Szász, the commercial director of the company. ‘We do not involve subcontractors, because we can thereby avert a great deal of risks possibly occurring in the future,’ adds the executive. This obviously makes operation more expensive, but they believe in this model.

Due to the great variety of demands, the required flexibility and local maintenance, large pan-European ventures have not been formed within the industry. There are several international players, but they have only one domestic competitor. Earlier, they acquired Auto Securit, a premium supplier of vehicle protection solutions using the brand name Skyguard, which proved to be a really good decision.

The Hungarian market still has huge potential: in western countries more than one third of cars are tracked by some kind of GPS-based system, as compared with Hungary’s 10-15 percent. The future is all about system integration and they also see perspectives in offering computer-aided training schemes for the improvement of driving style – considering the chance to keep track of the implementation of theoretical knowledge into practice. Companies which spend hundreds of millions on fuel are really grateful if they can save even the slightest percentage of expenditure.

Secret Control uses its own capital for all developments: they have enough revenue to make re-investment the best financing option for business. The company, currently employing about a hundred people, applies its own software which, rather fashionably, take over several functions from the workforce. Correspondingly, they try to make sure that their developers do not leave the company, for they are aware that a good IT professional is hard to substitute. The key to success is the continuous and flexible innovation as well as the provision of highly customised auxiliary services. One of them is a solution ensuring that the mobile parking service is activated and then de-activated automatically when entering and leaving the premises. In addition, they also developed a similarly creative idea: the automated issuance of electronic bill of lading. This can alleviate the burden of administration, important documents do not go missing, every single detail can be traced back in the system’s history, and what’s more, various authorities also approve them. Their goal is to reach an annual growth rate of 10-15 percent, which could be sustained for a longer term. Of course the founders have already received purchase offers for their flourishing business, but they decided to keep it. Instead, they are now contemplating international expansion: they are interested in acquiring a company which suites their profile, primarily in the surrounding countries. If business goes so well at home, why would not they try themselves at the neighbours.