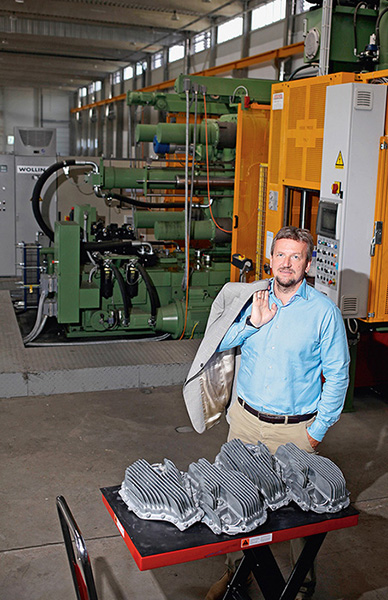 It was nine years ago that the aluminium foundry in Apc (Hungary) was acquired by its new Hungarian owners, but already in the first partial year, CSABAcast Llc. generated a profit of 140 million HUF. They also built a new greenfield hall, and thus have increased their revenues of typically around 3.5 billion HUF at the start of the crisis to above 10 billion today, and expect to reach 15 billion HUF by 2020.

The Apc plant is not exactly involved in lightweight production: nearly two dozen 60 to 90 tonne casting machines work on producing transmission and engine components, as well as other parts for some of the most prominent automobile manufacturers. The company’s clients include BMW, the VW Group (including Audi Hungaria), Daimler, Ford, GM and indirectly Ferrari and Maserati as well. The aluminium castings are pressed by enormous machines with 400 to 1600 tonnes of pressure. During this process, liquid aluminium at over 700 degrees Celsius turns solid within 4 or 5 seconds in the casting mould, resulting in a raw product which undergoes various other phases to become a finished component.

The CSABAcast Llc. plant is working at full steam, thus it is no coincidence that a brand-new production hall was built a few hundred metres from the original plant. The new hall has been in pilot operation since spring and should be ready to go live in the autumn – but let’s not look too far ahead.

The plant was brought to life in 1946 to recycle scrap aluminium left over from the war, but it was nationalised in 1949 and operated under the name Fémthermia State Company until 1989. After being in Austrian, German and then Swiss hands, it was purchased jointly by two entrepreneurs, one Austrian and one Hungarian. However, they did not succeed in making the plant profitable and their company (ADACast) was facing liquidation proceedings even before the financial crisis (and its negative impact) could set in.

The factory was saved from this state of near-closure when it was bought by well-known experts in the casting sector, namely Béla Majoros and Csaba Majoros (owners of Csaba Metál in Békéscsaba, Hungary), as well as Béla Hetzmann and Zoltán Váradi, both managers with experience in reorganisation.

It is difficult to believe, yet true that while ADACast was being wound up, the foundry’s new owners managed to close the partial year of 2008 with a profit of approximately HUF 140 million. The crisis hit the company when it was already virtually in a state of “tabula rasa”, and thus did not cause it any further serious damage. Costs were cut, for example, in the procurement of raw materials, while production processes underwent rationalisation and optimisation, and excess bureaucracy was eliminated in the office, reducing it to almost a third of what it was. Besides rationalising procurement and production, one of their most important weapons (according to Béla Hetzmann) was that, from the very beginning, they refused orders which could have only been fulfilled at a loss or at a very low profit margin. The lion’s share of the company’s success was due to the local upper and middle management who are still working with the owners, and who in following the approach and strategy of the new owners, have taken an active and effective part in getting the plant back on its feet.

In addition to attaining the business of the afore-mentioned prominent manufacturers, the company also re-acquired a former client which left upon seeing the pre-2008 problems, namely Miele, a home appliance manufacturer that still orders washing machine parts until this very day. (Approximately 80% of the company’s revenues come from supplying the automotive industry; CSABAcast is a Tier 1 supplier with regards to most parts.)

Thus in the end, the foundry spent the most difficult years of the financial crisis with engaging in conscious growth, enabling it to rise like a phoenix from the ashes. Its revenue of HUF 3.5 billion generated ten years ago has now increased to nearly HUF 10 billion, but by late 2014, it was already obvious that the original premises were becoming cramped and that the ever increasing number of machines would not fit there. According to Béla Hetzmann, a dozen Western European foundries have shut down over the last few years, while nearly all of the well-managed Central and Eastern European aluminium foundries are operating at high capacity as they take over the contracts of the closed Western plants. (Competition from Asia is not significant in this area, as only Turkey could be viewed as a real competitor outside of Europe in the automotive industry.)

The construction of the new production hall, which has been underway since 2015, cost the company HUF 5 billion. Of this, HUF one billion was granted under an individual government decision, while half of the remainder was financed through bank loans, and the other half was allocated from the profit reserves generated by the company over the years. The new plant is ideal for scaling up and the expected revenues of HUF 10 billion for this year could grow to 15 billion by 2020. Moreover, since the new greenfield unit could be expanded even further, the company could even generate up to HUF 20 to 30 billion in revenues.

There are no plans to raise capital in the short run, although the fact that automakers are increasingly shifting towards electromobility poses a significant challenge, as CSABAcast’s strength lies in conventional transmission and engine parts. Thus the agile foundry in Hungary’s Heves County (which is currently among the top five biggest Hungarian-owned plants of its type) must still find the segments that it can supply with a sufficiently broad range of parts for hybrid and fully electric vehicles.

In addition to facing the challenges presented by electric vehicles, the company must also tackle the serious task of finding and retaining a suitable workforce in the shorter run. Most trained experts tend to move to the West, while less skilled young people are more difficult to motivate despite wage increases, reports Béla Hetzmann, based on his experience.

By creating a new manufacturing base, the owners and the management of CSABAcast further optimised the complex production process, established a Western European working environment for all employees and also enabled further ambitious growth in terms of revenues. They want to be prepared for the future expansion of electric cars, and thus are looking for e-vehicle targets for acquisition purposes. Moreover, they may consider raising capital market funds within the next few years, should they receive larger individual orders.